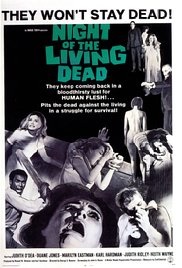 Plot: There is panic throughout the nation as the dead suddenly come back to life. The film follows a group of characters who barricade themselves in an old farmhouse in an attempt the remain safe from these flesh eating monsters.

Story: Night of the Living Dead starts when Barbra (O’Dea) and Johnny visiting their father’s grave when a stranger attacks them biting Johnny leaving Barbra running for her own life. Finding shelter Barbra works with Ben (Jones) to make the house safe from the undead that seems to be searching for their latest victims.

As the night continues we find out there are more survivors in the house with Harry (Hardman), Helen (Eastman), Tom (Wayne), Judy (Ridley) and Karen (Schon) which leads to both sides having to make the big decisions about whether they will make it through the night alive.

Night of the Living Dead is one of the most famous zombie movies in the history of film, it is also the start of one of the most well developed series of films that has evolved to keep up with the trends in horror. This one took risks with the low budget at for the time casting a well-spoken black lead actor. While that doesn’t look like anything that big now at the time Hollywood was still behind equality and this film didn’t care about that because the film is about the living needing to survive the dead. We also see the shocking moments happening through the film and with the brilliant use of music to amp the atmosphere within each and every scene this really is one of the all-time classics of the horror genre.

Overall: This is one of the greatest zombie movies ever made, one that built a franchise and gave us a new breed of horror creature. 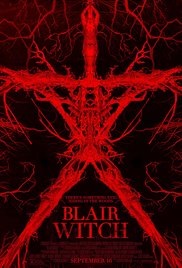 Plot: After discovering a video showing what he believes to be his vanished sister Heather, James and a group of friends head to the forest believed to be inhabited by the Blair Witch.

Story: Blair Witch starts as we learn that James (McCune) preparing to continuing the search for his older sister who was the victim in the original Blair Witch Project. Now Lisa (Hernandez) is shooting a documentary with James and their friends Ashley (Reid), Peter (Scott), Lane (Robinson) and Talia (Curry) with the latest equipment to track and record from eye level.

As the journey into the woods starts it isn’t long before the witch of the woods starts playing games with them and the usual divide between continuing and giving up splits the group and they are going to become the latest victims of the witch in the woods.

Blair Witch is a sequel to one of the most popular horrors in the 90s that gave us an endless string of found footage films that really didn’t work. This is one of the films that I was never a true fan off because nothing really happens. Sadly, this ends up doing the same thing where we get plenty of running around screaming and shouting which ends up with shaky cam. This has all the potential to be one of the best sequels but in the end we learn very little extra and just get a draw a film which cash in for another horror franchise. I really wanted to see more because Adam Wingard is a great director with The Guest and You’re Next to his name but this film just fails to reach the levels of the two.

Overall: Disappointed sequel that just ends up being everything wrong with found footage films.

Plot: Joan and Michael invite their dearest friends over for a cordial dinner to discuss the passing of Joan’s husband Neil. But as each guest arrives, dark secrets are revealed and the main course turns out to be murder!

Story: Murder Made Easy starts as Joan (Graham) and Michael (Kelly) hold a dinner party for Joan’s ex-husband who passed away a year ago, the guest including family friends Marcus (Lupinski), Cricket (Richeson), Damien (Ahearn), Angela (Cutchlow) and Henderson (Rose Jr) who all have a gift left for them.

As the evening rolls on and the course are presented and the events of the evening are played out just how they were planned.

Thoughts on Murder Made Easy

Characters – Joan is the grieving wife who is hosting the party for her husband’s friends and family, she has gifts for them all, while also knowing secrets about them. Michael is joining Joan in the hosting duties and has been planning this night that they will never forget. We also have a colourful selection of guests at the party each with different connections to the past.

Performances – Christopher Soren Kelly is one of our two main leads and he is good throughout the film, you can see his character ticking in every scene. Jessica Graham is great as Joan, she keeps us believing each decision through the film. the rest of the cast are good bringing the colourful characters to life.

Story – The story is about a dinner party with a twist, it follows a group of friends grieving a lost loved one. The story is hard to go into detail without giving too much away. The story does go in a direction that could easily surprise by the end which is enjoyable to see and it does have a dark comic tone to moments in the film.

Thriller – The thrilling side of this movie is keeping us guessing to what is going on through the night.

Settings – The film is set in one house, for one night, this helps keep everything needing the suspicious feeling in what is happening. 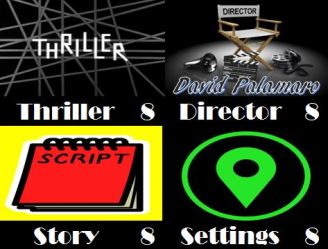 That Moment That Annoyed Me – Cricket’s character was frustrating in the new worldie way.

Final Thoughts – This is an enjoyable thriller, it keeps you guessing until the final scene.

Overall: If you want a contained, calm thriller, this is for you.