Plot: In a remote part of the countryside, a bungled kidnapping turns into a living nightmare for four central characters when they cross paths with a psychopathic farmer and all hell breaks loose.

Story: The Cottage starts when David (Serkis) and Peter (Shearsmith) have kidnapped Tracey (Ellison) taking her to a remote farmhouse. The two are brother’s looking to make a quick quid with this half assed attempt with the kidnapping.

When everything stars to go wrong it doesn’t take long for a bigger threat to come after the unlikely group who along with Tracey’s step-brother Andrew (O’Donnell) must survive against a deadly psychopathic farmer.

Thoughts on The Cottage

Characters/Performance – David is the brother with a plan, he wants the money to get away from this life, Peter is filled with panic about the kidnapping not wanting to upset his wife back home. Tracey is the victim who is tougher than both the men involved in the kidnapping.

Performance wise, Andy Serkis is good as the deadpan lead through the film, while Reece Shearsmith is good in what you would expect to be the leading lady, constantly screaming. Jennifer Ellison goes against her type cast of a dumb blonde by being a tough blonde who take nonsense.

Story – When looking at the basics of the story it does come down to a kidnapping gone wrong with deadly consequences. It is something we have seen before and it is a good formula for horror comedy so I can’t find anything bad with this aspect of the film, I do also like the surprise that you are left to wonder just who will get killed next with no one being safe.

Comedy/Horror – The comedy is good in this film we have great chemistry between Peter and David which add to the laughs with their hapless attempt to kidnap Tracey along with the reactions to the killer. The horror is generic to say the least, it is just a disfigured killer trying to kill the main characters in a gore filled way, nothing to fancy.

Settings – Having the film set on the remote farm comes off well because it shows a good idea for location of the kidnapping as well as a god location for the killer to hunt in.

Special Effects – The special effects are mostly all practical and all come off very well to add to the extra gore needed for the film.

Final Thoughts – This is a good horror comedy that doesn’t take any part of the film too serious with over the top kills and colourful characters. 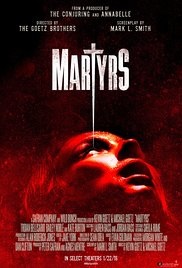 Plot: A woman and her childhood friend seek out revenge on those who victimized and abused them.

Story: Martyrs starts as we see how a young girl Lucie escapes from a torturous experience only to defriend young Anna as the two become friends. Years later the two are still friends but Lucie (Bellisario) gets her revenge by killing the whole family bringing in Anna (Noble) to help clean up the mess.

With everything cleaned up Anna tries to see through the madness that has come over Lucie. While helping clean up Anna discovers the truth about the story that Lucie had always been telling and it is now her turn to experience all the pain Lucie once felt.

Martyrs is a remake of one of the most uncomfortable horror movies ever made. We get to the similar story but with the main twists removed from the main part of the story. We loss the shock value of most of the scenes with only one horrific scene remaining in the movie. We end up with just a ridiculous over the top revenge mission that just doesn’t feel right for the style of the film. The acting isn’t really up there with the best and is in the most part poor. This really is just a pointless remake of a film that was shocking enough in the first place.

Plot: An underground, underdog story of the prolific journey that women take to follow their dreams and find their way in a male dominated fight industry.

Story: Ballerina I’m Not starts as Francesca tells the story of what gave her motivation to dream of becoming a wrestler, being able to follow in the footsteps of the legends of the likes of The Fabulous Moolah, we the struggles at home she faced and the training to undertook to start in the industry.

We see the different styles of wrestling that Francesca learns through the years, we also see the professional friends and enemies, the hardships and sacrifices she has made along the way for her dream. 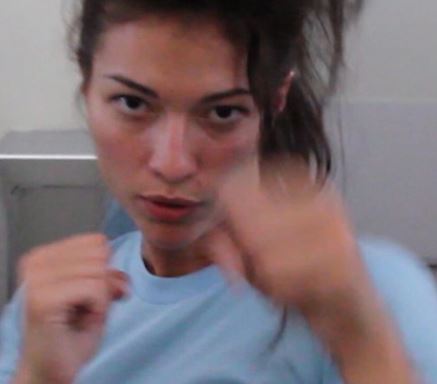 Thoughts on Ballerina I’m Not

Documentary/Sports – Women’s wrestling is one of the hottest discussions in the biggest industry in wrestling today, the WWE. It has been years of the women trying to prove themselves as athletes over just eye candy and now they are finally getting taken seriously. With this documentary we get to learn about the women who have not made it to the big leagues and must try to make a name for themselves in the independent industry where the other competitors will do anything to get to the top. This is fresh to see because we seen clips of the men who have gone all over the world and found it easier to gain respect but seeing the women side of things we get to see how much tougher it is for them.

Scene of the Movie – Proving herself fight.

That Moment That Annoyed Me – There isn’t enough wrestling clips to show the full timeline of the career.

Final Thoughts – This is a film that shows how difficult the wrestling industry is for women, we she how they don’t always get treated equally even with the women getting taken a lot more seriously at the top of the industry. If you have ever wondered how difficult the independent wrestling scene is, you will learn a lot, you will also learn how the athletes will continue to learn their trade through the years.

Overall: Documentary fans and wrestling fans should be watching this one.