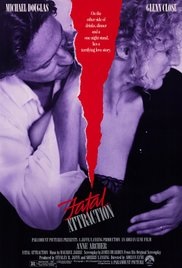 Plot: A married man’s one-night stand comes back to haunt him when that lover begins to stalk him and his family.

Story: Fatal Attraction starts as we meet happily married lawyer Dan Gallagher (Douglas) he has a wife in Beth (Archer) and a daughter Ellen (Latzen), but he finds himself frustrated by not being able to have time with just his wife. This changes when he gets a weekend alone.

While alone Dan spends the night with new co-worker Alex Forrest (Close) getting a chance to lift all those frustrations. The one night turns into a long weekend but when Dan explains it was just that, we get to see a darker side of Alex who refuses to accept this response.

When his family returns Dan wants to move back into his everyday routine and follow through on the planes for a new home in the country. Alex on the other hand takes things serious and becomes obsessed with Dan, wanting to make him love her and will go to any means to make this happen.

Characters/Performance – Dan is a high flying lawyer about to hit the next level of his career but finding himself drawn to a new co-worker he finds himself having a weekend long affair. He wants to continue his normal life but now must balance his normal life with the new obsessed shown by Alex. Alex is a co-worker that has the affair with Dan, but she isn’t mentally stable enough to be involved in this type of relationship and spends the next days, weeks and months stalking Dan and his family. Beth is the wife of Dan but the truth is we barely learn too much about her character.

Performance wise, Michael Douglas is great in this leading role because you do have to feel for his character but also understand he isn’t the nicest guy which is what he is always good at playing. Glenn Close is fantastic as this unstable woman that could do anything to get even. The rest of the performances are all good throughout the film.

Story – The story works on all the levels it needs to, we have one night affair that the husband must pay for, for the rest of his life, be it by hiding his mistake or protecting his family from the truth. This is also about how one person can become unstable once they are involved in an affair putting everything on edge.

Thriller – This does keep you on edge as you wait to see just what Alex will try to do next to get what she wanted.

Settings – The settings show us how easy it would have been to have the affair but how difficult it would be to get away from one now.

Special Effects – The effects all come off great when needed as the film doesn’t turn to them too easily.

Final Thoughts – This is a thriller that spawned almost yearly attempts to re-tale the story only to fail because this plays out just as it should be.

Overall: One of the very best thrillers out there. 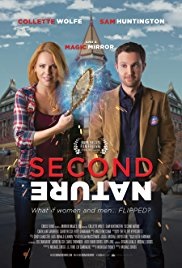 Plot: A woman and man compete in an unusual race for mayor when gender roles magically reverse.

Tagline – What if everything… FLIPPED?

Story: Second Nature starts when a small town’s mayor is killed in a car crash, (well this doesn’t sound like a comedy) ultra-cocky Bret Johnson (Huntington) plays on running for mayor but Amanda Maxwell (Wolfe) wants to change the town for the better place but lacks the charisma Bret has.

When the two get into an argument things chance and Bret and Amanda see things very different as town finds themselves swapping sexes with the men acting like women and women acting like men, apart from Bret and Amanda. The two must put aside their differences to figure out why everything has been changed in history so women were the pioneers and men seek equal rights.

Characters – Amanda Maxwell has always been trying to fight for her people, be it school or in adult life her town, she wants to run for the vacant mayor role but after her argument with Bret finds herself leaving in a role versed world. Bret Johnson is the cocky guy in town always overshadowing Amanda and would easily be considered the favourite for the mayor job, but when he has the argument with Amanda he finds himself in a world where men are the second-class citizens to women. The town’s people all add to the comedy in the world swapped sexes.

Performances – Collette Wolfe and Sam Huntington are both great in the leading roles, the bounce off each other very we and pull off the comedy required for the roles. the supporting cast all get extra laughs for the main story.

Story – The story revolves around the idea the history of the world is swapped so women were the dominate sex while men are looking to get equal rights, so you can see where most of the comedy comes and how two main characters haven’t swapped with what they know. This idea has been done with just the main characters swapping plenty of times but going to a world change does feel original spin on it all. The story does address the real-world situation of not both sexes being equal and also tackles how people can be elected mayor.

Comedy – The comedy comes from seeing the reversal of sexes dealing with the harassment the other would be used to, be it that Hooters turns in Peckers or a male intern hitting on Amanda.

Settings – The small-town setting shows us how the people of the town know who the people are so any change raising eyebrows.

Scene of the Movie – The morning after.

That Moment That Annoyed Me – Certain references are overly cliched.

Final Thoughts – This is a surprisingly entertain comedy, as we know I am not a comedy fan normally, this hit the right marks to tell an important story and get the laughs needed.

Overall: Comedy that elects the laughs.

Couch Gag – This time the family is already there and looks very confused.

Plot Synopsis – After skipping church one week, Homer decides that he is never going back. However, when a calamity occurs, it takes the combined efforts of a number of people from different faiths to save him.

What is going on really – We start with Homer having a dream sequence but awoken just to be forced to attend church and against Marge’s wishes refused to go due to it being too cold.

Homer enjoys the free time away from the family while Marge forces the kids to attend church in freezing conditions, here we get plenty of frozen references that Maggie experiences. Homer meanwhile goes through film references too with Risky Business.

After his enjoyable day Homer decides to give up going to church posing the discussion that you can believe in God without going to the church once a week, but Marge doesn’t want the rest of the family to feel the same.

With Homer almost starting his own religion he gets Revered Lovejoy and the Flanders family trying to turn him back to their faith but the morale of the story is deeper and tries to teach people to let people believe in their own faith. 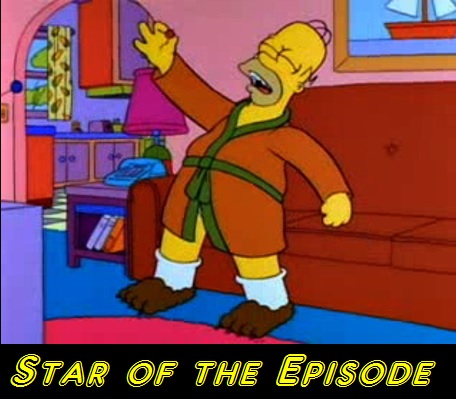 Final Thoughts – This is yet another episode that feels way before its time, it offers the discussion of how to have your own faith no matter what other people think. Sure this is done to a full comic tone but it does show us how important it is to respect other people’s religious beliefs.