Plot: An archaeology professor unearths a dangerous artefact, unwittingly releasing a creature that is able to kill with the power of its bone-splitting scream.

Story: Scream of the Banshee starts in 12th century Ireland as we see an evil vanquished before moving to present day. We get to meet researcher Professor Isla Whelan (Holly) and her students Shayla (Baer), Janie (Cochran) and Otto (Haberkorn) who are getting the latest project ready.

When the team discovers a box from the 12th century they discover the head inside which unleashes a terrifying scream before vanishing. When the research team start getting haunted by the banshee they must locate former professors Samuel Page (Adams) and Broderick Duncan (Henriksen) for answers on how to stop the creature.

Scream of the Banshee plays into the screaming banshee myth which is the first time I have seen this in a horror movie which I am happy to see. The problems do build from that though because the story makes a big point of this being an Irish myth and sets the film in America almost randomly. We get the banshee that can only attack when you scream but in the final act it doesn’t seem to matter so we have built up nicely on for it to end playing against all of the rules created earlier in the film. The overall story is easy to follow so just enjoy the kills and look into an interesting myth.

Lauren Holly: Professor Isla Whelan leads an archiving team at the university who discover a 12th century box with a head inside. Once they open the box they start getting haunted by the banshee as she needs to rebuild her crumbling relationship with her daughter. Lauren is solid in this role but the character doesn’t seem to be as big of an expert as we are led to believe.

Lance Henriksen: Broderick Duncan is a former professor who was obsessed with the box so much so that he has become a fanatic theorist. Lance is the big name in the film even though we don’t meet his character in person till the final act.

Eric F Adams: Samuel Page is the former assistant to Duncan who doesn’t want anything to do with but once he starts also getting haunted by the banshee he must help the researchers find Duncan to put a stop to everything. Eric does a basic job as the character telling more of the story.

Support Cast: Scream of the Banshee has a supporting cast which are mostly made up for the students who just become disposable as the story unfolds.

Director Review: Steven C Miller – Steven give us a horror that looks into Irish folk law to get the horror but has one too many false jump scares.

Horror: Scream of the Banshee plays into the jump scares of horror as we see each character getting haunted with jump scares coming in nearly every scene but often too many times.

Suggestion: Scream of the Banshee is a late night television experience that can be enjoyed by the horror fans. (Late Night TV)

Worst Part: Certain inconsistency in how the banshee acts.

Tagline: She hasn’t been out for a thousand years.

Overall: Simple horror that does all it needs to. 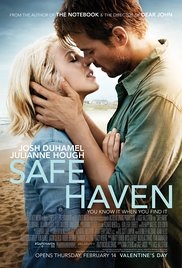 Plot: A young woman with a mysterious past lands in Southport, North Carolina where her bond with a widower forces her to confront the dark secret that haunts her.

Story: Safe Haven starts as we see Katie (Hough) running from her past with Tierney (Lyons) fast on her tail, but for now Katie finds herself in Southport North Carolina. Katie looks to make her own life away from her past with a new job in a diner and a place of the radar.

In this new town, Katie makes a friend in Jo (Smulders) as well as striking up a new potential relationship with widowed father of two Alex (Duhamel) who has been raising his two kids Josh (Lomax) and Lexie (Kirkland). As the romance blossoms Alex’s kids have a different reaction to their father meeting a new woman but does Katie want to get involved in a relationship when she might have to run if anybody from her past finds her?

Characters/Performance – Katie is a character that is all too familiar in modern relationships, a victim of domestic abuse who is trying to make a fresh start away from her abusive husband. She tries to keep to herself but is drawn to the kindness in a stranger. Alex is the loving father and widow who is trying to do the right thing for his kids as well as grieving for his own wife’s death. He is a good man full of acts of kindness to the community. The Tierney character is the one hunting down Katie, he is a drunk and a police officers that is filled with twists to the outcome. Jo is the friend Katie makes in the town that helps her with the hard decisions.

Performance wise Julianna Hough and Josh Duhamel struggle to carry this film as well of not having the best chemistry in this film. David Lyons does well with his limited time and does Cobie Smulders who shows she could easily be the star of this movie.

Story – The story is 101 of Nicholas Sparks story, we have a damaged person going to a new location and falling in love with a broken person as we wait for the past to catch up with them. Nothing feels too fresh in the movie but it will work for the fans of the style of the movie.

Romantic/Thriller – We have all the romantic story that will work for the fans but doesn’t have much that comes of realistic throughout. There is a thriller side of works in places but you never feel on edge until the final act.

Settings – The small town is a good setting for the runaway to start new life but it could easily be just any town which should make her hard to find.

Final Thoughts – When you look at this film the leads lack that chemistry need for the lead roles, it also has a selection of terrible decisions which would only make things worst with a twist that will only work for certain people.

Overall: The fans of Sparks will enjoy but others will find this too much.