Plot: Widowed Audrey retreats to an isolated Welsh cabin after a failed suicide attempt, to recuperate. Still haunted by the tragic death of her husband and struggling with her psychosis, she begins to hear strange noises.

Story: Soulmate starts as we see widowed Audrey (Walton) move to a small Welsh town to escape her life and get over her own suicide attempt. Being welcomed in by the caretaker Theresa (Myers) we see how small this town really is.

When Audrey starts hearing sounds around the cottage she finds herself face to face with Douglas (Wisdom) a spirit living in the house after his own heartbreak led to his suicide. Audrey starts to try and learn more about what happened to Douglas as the two become friends through their nightly conversations.

Soulmate tells us a ghost story which looks at the two characters who have been through the same loss but have had different outcomes to their suicide attempts. The story starts by trying to build tension only for it just end up being friends chatting which is a huge disappoint. The problem with this film is that we get a build up for a suspenseful horror only to become friendship conversation between living and the dead.

Anna Walton: Audrey is a struggling widow who has tried to take her own life with her grief. She takes a trip away where she can deal with her own problems through her music, but when she meets the ghost of the former owner of the home who has dealt with similar issues. Anna is a solid lead that we can see the side effects of her loss throughout.

Tom Wisdom: Douglas is the ghost living in the house that has been desperate for contact with a living being which Audrey can give him. He turns into a dangerous spirit who doesn’t want to let Audrey leave. Tom is solid but because of the design of the character we lack that special moment for his character.

Tanya Myers: Theresa is a caretaker for the property who has a connection with the house and the spirit inside. Tanya is solid but I do feel we needed slightly more from the character.

Support Cast: Soulmate doesn’t have the biggest supporting cast with odd scenes from Tanya husband and otherwise mostly voices. This does work to the films advantage with the smaller cast.

Horror: Soulmate doesn’t reach any real horror levels with the early jump scares not being anything before it just turns into conversations.

Mystery: Soulmate does make us wonder about what happened to Douglas in the house.

Settings: Soulmate keeps the settings within the country side or inside the cottage which shows us where the characters are in the bigger picture of the world.
Special Effects: Soulmate has good effects when needed to show Douglas first appear.

Suggestion: Soulmate is one I think can be watched late night for a horror fix. (Late Night TV)

Best Part: Not just being a ghost story.

Tagline: She Thought She Was Alone

Amber Content, Up Ha, Clydebank Films and Ripple World Pictures are delighted to announce that UK/Irish Co-Production MOON DOGS will be released in UK and Irish cinemas from 1st September.

MOON DOGS won Best International First Feature at Galway Film Fleadh 2016, was BAFTA Scotland nominated, BIFA longlisted and was selected as Best of the Fest at EIFF 2016. It has also garnered standout support from Irvine Welsh “Not one, not two but three stars are born in this beautiful movie” and Screen Daily: “Delightful…Coming-of-Age Comedy.”

A Celtic road trip following teenage step-brothers Michael (Jack Parry-Jones) and Thor (Christy O’Donnell) as they journey from Shetland to Glasgow for very different reasons. Aspiring Irish singer Caitlin (Tara Lee) beguiles both boys and passions come to a head with a music festival and an ancient Norse ceremony as the backdrop.

MOON DOGS is directed by multi BAFTA nominated, multi-award-winning director / screenwriter from South Wales Philip John, written by Derek Boyle and Raymond Friel, produced by Kathy Speirs and Co-Produced by Suzanne Reid, Dominic Wright and Jacqueline Kerrin with the support of Creative Scotland, Ffilm Cymru Wales and the Irish Film Board/Bord Scannán na hÉireann. Brian Jonestown Massacre’s Anton Newcombe became involved in the film’s journey in February 2014 and not only composed Thor’s music but also the original soundtrack for the film and is responsible for providing a score which is both exciting and moving, and is an embodiment of the celebration of the spirit of rebellion.

Director Philip John said: “Making a film is like bringing up a child. You love her, you dress her well, you teach her honesty then you boot her out the door so she can spread the word that rebellion is good.”

Plot: Two American Soldiers are trapped by a lethal sniper, with only an unsteady wall between them.

Story: The Wall starts as follow two American soldiers Isaac (Taylor-Johnson) and Matthews (Cena) who have been watching over pipe works in the Iraq desert, after nearly 18 hours with no sign of life, Matthews decides to walk to the only area that looks like danger a Wall.

When Matthews is hit by an unknown sniper, Isaac goes down to rescue him but finds himself needing to use the wall as cover injured himself too. With no way of rescuing Matthews, Isaac tries desperately to get help on the radio on to learn he is chatting to the enemy sniper Juba (Nakli). We are left in a cat and mouse situation as the two get to know each other, while waiting for the other to make a mistake.

Thoughts on The Wall

Characters – Isaac is the wounded soldier trapped behind the wall waiting for a mistake from Juba, he is bleeding out and has no connection for rescue, the two chat on the radio as Isaac must find a way to survive the situation. Matthews is fellow soldiers that gets hit by the rouge sniper, he spends most of the film out in the field while the others do battle. Juba is the sniper of legends, nicknamed ‘The Ghost’ because of how deadly he is on the battle field.

Performance – Aaron Taylor-Johnson must do most of the carrying of this film, he does a great job at this because you are held on every word he wants to say and action he makes, John Cena is solid but doesn’t have much to do, Laith Nakli is all voice work as he is the one talking to Isaac through the film.

Story – The story is simple to follow, two soldiers trapped against a lone sniper with nowhere to hide. It is a cat and mouse battle between the two sides as they look to get one up on each other. Having previously seen the movie Mine which also follows a soldier trapped in Iraq minus the sniper it does feel like this is more of the same even if the added inclusion of the sniper does make it feel more intense.

Thriller/War – You are kept on the edge of your seat wondering how things will unfold between the two sides and the war setting only intensifies things as we hear both sides of the war.

Settings – The location is key for this movie as we watch how the characters must do battle in a place where running or rescue isn’t going to be something that can be achieved.

Scene of the Movie – First attack by the sniper.

That Moment That Annoyed Me – It could have been a lot more intense.

Final Thoughts – This is a good addition to the genre of person trapped against enemy that could kill them but it doesn’t reach the highest levels.

5 Questions About The Trailer

Plot – A behind-the-scenes look at the life of author A.A. Milne and the creation of the Winnie the Pooh stories inspired by his son C.R. Milne.

1) Could this movie be an outside bet for Oscar nominations?

2) Domhnall Gleeson look unrecognisable in this role, will this be his best to date?

3) Will the young actor become the next big thing?

4) How much Winnie the Pooh merchandise will be made for this film?

What are your thoughts on the Trailer?

Check it Out Here

RISE OF THE FOOTSOLDIER 3: THE PAT TATE STORY 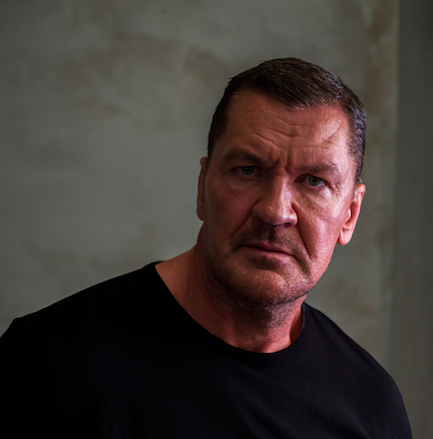 RELEASES 3RD NOVEMBER IN CINEMAS AND ON DIGITAL HD

An all-out bare knuckle prequel to the iconic Brit crime thriller Rise Of The Footsoldier. Starring the original loveable-rogues Craig Fairbrass and Terry Stone and a British dream-team ensemble, in a brutal and bloody real life story of Essex, drugs and rock and roll.

The rise of ruthless Essex gangster Pat Tate, who blazes
a path from Marbella to the Medway in the late 80s, peddling pills and snorting coke and crushing anyone who gets in his way, in his quest for cash and power. Double- crossed by an ex-pat drug baron, Tate ends up in prison. Undeterred, he establishes himself as top dog inside, and gets himself in shape in preparation for his release – when he plans to reclaim his turf the only way he knows how – with violence, and no mercy.

Terry Stone (Rise of the Footsoldier, Bonded By Blood)

“Before the murders, the pills, the doors, the agg… there was Marbella”

On the 10th anniversary of the release of the smash hit gangster classic Rise Of The Footsoldier comes this no-holds- barred prequel, telling the tale of real life Essex Boy Pat Tate, a man mountain with a hair-trigger temper, a serious fondness for pills and cocaine, and an unquenchable hunger for power. The Scarface of Southend is a role Craig Fairbrass was born to play, and he grips the role between his teeth and does not let go. It’s a towering performance that cements Fairbrass’s reputation as a screen hard man of the top rank.

The rest of the cast is a veritable who’s who of the creme de la creme of Brit gangster film talent, with the likes of Terry Stone (Bonded By Blood), Eddie Webber (The Firm), Larry Lamb (The Hatton Garden Job), Jamie Foreman (Layer Cake), Josh Myers (Bonded By Blood 2), Roland Mannokian (The Business) and Billy Murray (Essex Boys) shoving their lovely mugs onto the screen. There are also appearances from Big Brother sensation and bareknuckle fighter Paddy Doherty in his acting debut, and legendary Happy Mondays frontman Shaun Ryder as a nasty piece of work called Mad Dog.

It all adds up to an hour and a half of non-stop, foul- mouthed, proper lively gangster mayhem – a superb addition to the Footsoldier franchise. 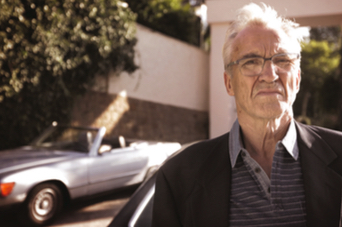 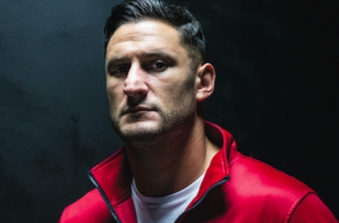 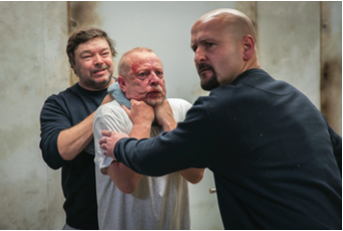