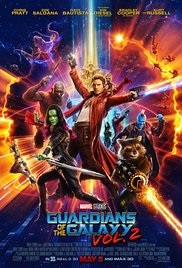 Plot: Set to the backdrop of Awesome Mixtape #2, ‘Guardians of the Galaxy Vol. 2’ continues the team’s adventures as they unravel the mystery of Peter Quill’s true parentage.

Verdict: Character Building of the Galaxy

Story: Guardians of the Galaxy Vol, 2 starts with the guardians Peter Quill (Pratt), Gamora (Saldana), Drax (Bautista), Rocket and Baby Groot protecting the galaxy once more doing a paid job for Ayesha (Debicki). The payment is none other than Nebula (Gillan) who they aim to target her bounty, but when Rocket commits the same crime the Guardians are once again on the run.

Being saved by Peter’s father Ego (Russell) the team split up with an old friend Yondu (Rooker) the Guardians will learn more about themselves, working together and being the saviours of the galaxy again.

Thoughts on Guardians of the Galaxy Vol. 2

Characters/Performance – Peter gets a chance to learn about his father while still trying to be the leader of the Guardians continuing on his maybe romance with Gamora. Gamora tries to continue being the strong silent type but this time gets to deal with her relationship with sister Nebula. Drax becomes the best character in the film getting all the best line with his way of life that he once lived, having a connection with Mantis. Rocket continues to deal with his wishes to be alone and not make friends seeing himself in Yondu. Baby Groot is fun for the most part getting the cute award. Yondu continues on his arc as we continue to learn he isn’t as much of a bad guy as he wants to be. The additional characters include Mantis who does get plenty of laughs with her innocent nature, Ego is also very interesting with his past becoming the interesting. 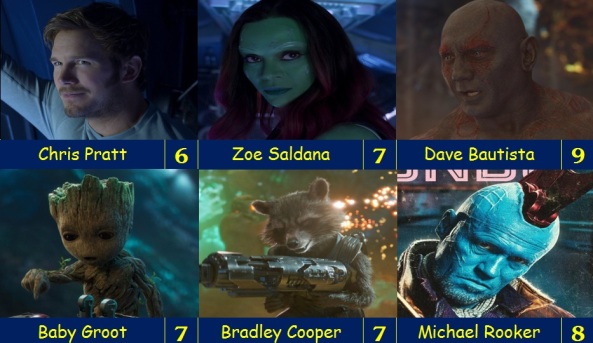 Performance wise, I feel Chris Pratt does struggle to maintain the charm he gave us in the first film, Saldana does continue to look the part of a kickass warrior though. Dave Bautista for me is the star of the film getting all the laughs wanting you to see his next scene. Cooper continues he great work voicing Rocket and Rooker does well with his increased involvement in the film. Kurt Russell fits into an 80‘s themed movie perfectly and does well throughout. If you are going to look into Stallone to be a big part you will be disappointed as he is only in one scene building his character for future films. 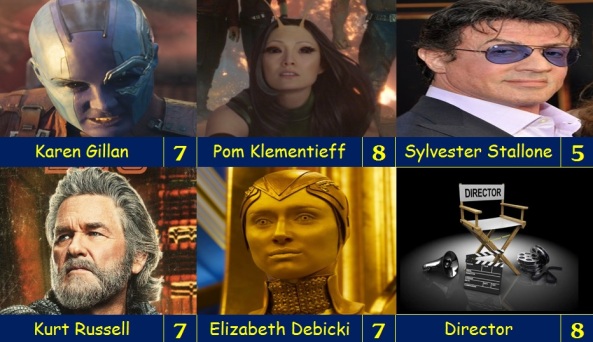 Story – The story can be described in one phrase ‘character building’, I say this because we have a lot of pairing up as the good guys work with bad guys putting their differences aside to see themselves in a new light. This is the base of the story and is great for the next stages of the Marvel Universe but in the end we are left with something slightly flat with the normal big fight feeling at the end. This isn’t the best story but can entertain where needed.

Action/Adventure/Sci-Fi – The action is large scale but nothing new with the adventure also not being on the level of the first film, the sci-fi is all good looking at the potential universes the Guardians could have adventures in the future.

Settings – The settings are all created to look beautiful and unique without being something of complete wow factor.

Special Effects – The special effects are all great and it is hard to find a fault in them for the most part. 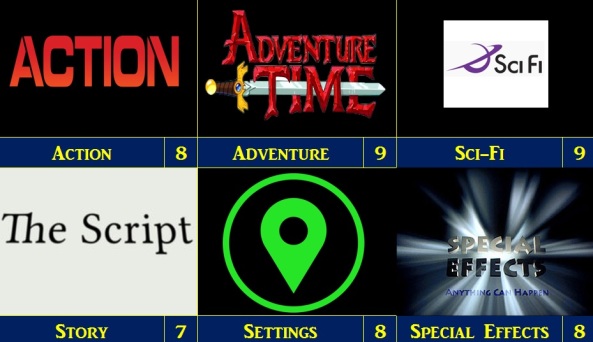 Final Thoughts – As a huge fan of the original film, I couldn’t help but find myself slightly let down because this film does feel slow in places and too character development heavy.

Overall: This is a fun film and it will be important to where the film franchise goes next.