Plot: The story of Ray Kroc, a salesman who turned two brothers’ innovative fast food eatery, McDonald’s, into one of the biggest restaurant businesses in the world with a combination of ambition, persistence, and ruthlessness.

Story: The Founder starts in 1954 as milkshake machine salesman Ray Kroc (Keaton) is performing his sales pitch around the diner scene. His luck is about to change when Dick (Offerman) and Mac (Lynch) the McDonald brothers order eight machines which grabs Ray’s attention as he visits to hear the story of the first ever McDonald’s and how the service revolutionary idea behind 30 seconds’ food service.

Seeing the operation Ray wants to franchise the idea against the brother’s wishes. When Ray finally gets his way he makes McDonalds the fastest growing business in America but the backlash falls when the brother’s want their share of the business they created leading to a law case getting everything messy between the two sides.

Thoughts on The Founder

Story – This is an interesting story of where McDonalds came from which is fine but my issue is the lack of a real-time scale of the events, I also didn’t like how the end credits show certain important elements of the story which barely get touched on in the film. in the end the story is just another story about a ruthless business man who took advantage of the real brains behind the idea.

Biography/History – This is a good look back at how McDonald’s is founded and it shows part of the history where a business man took advantage of the real workers.

Characters/Performance – The characters are all based on real people with Ray Kroc coming off as the ruthless businessman who just doesn’t give up, while thee brother’s being portrayed as the suckers who wouldn’t believe his business mind. The rest of the characters are all only bit parts in the film with them only being part of Ray’s life.

Performance wise Keaton does shine with Offerman and Lynch both being great as brother’s, it is hard to say a bad thing about any of the performances in this film.

Settings – The settings used all reflect the time the film is set in, with the iconic McDonald’s logo being the most iconic moment in this film.

Final Thoughts – This is could easily have been just a documentary that would have been a lot more interesting as an all-round story.

Overall: We have seen this before and in the end it brings very little new.

Plot Synopsis – Homer’s heckling of the Springfield Isotopes baseball team during one of their games inadvertently leads to his appointment as the new team mascot.

What is going on really – We start as Homer is recounting his story of his work baseball night out, but I do find it strange how Mr Burns has forgotten the family’s name after the last episode which revolved around the Simpsons trying to help Mr Burns become Governor.

The local team Springfield Isotopes are the worst team in the league but Homer’s night is something he never expected when he bonds with Mr Burns. Homer starts dancing inspiring the team to win their first game in years.

With Homer become the mascot the team goes on the first unbeaten run in their history. Unlike the players, Homer gets called up to major leagues to be the mascot for a bigger team and a new city for the family.

The Simpson’s learn the hardest lesson as the fans reject Dancin’ Homer and they return to Springfield in shame. 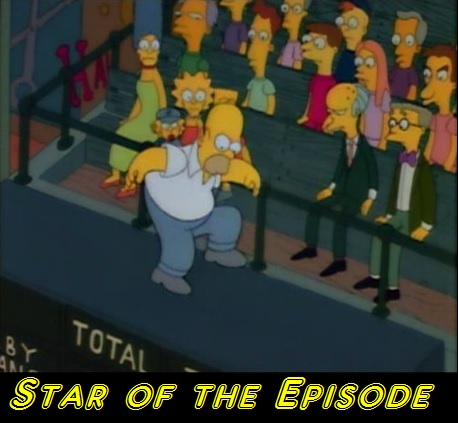 Final Thoughts – This does feel like a slow episode that show how the show is happy to forget the events in previous episodes, some of the jokes are long winded and I feel this is a very weak episode from the show.