MISSION CONTROL will have preview screenings and is available On Demand & DVD from 14th April.

Plot: At the heart of the Apollo program was the special team in Mission Control who put a man on the moon and helped create the future.

Verdict: Fascinating Look at the Men in Mission Control

Story: Mission Control: The Unsung Heroes of Apollo starts as we meet the men who were part of the original Mission Control unit, we see how they reacted to learning of Russia’s achievement to get an unmanned spacecraft into space. We see how these men were almost drafted to work in NASA to make Kennedy’s promise of a man on the moon happen.

We learn the ups and downs these men had to go through during the race to the moon, be it the tragedies NASA faced, the successful mission and of course the most famous mission of success Apollo 13.

Thoughts on Mission Control: The Unsung Heroes of Apollo

Documentary/History – Space travel has fast becoming one of the most interesting achievements in modern human history, so taking a look at different views on the achievement is always a great thing to look at. Having this in documentary format gets the interviews with the men who were involved in some of the biggest and most impactful moments in space travel.

Final Thoughts – With Hidden Figures recently becoming one of the most popular films of 2016/17 space travel achievement has gained a new audience. This film gets to show us the men behind the mission that made household names of Neil Armstrong, John Glenn, Buzz Aldrin or Jim Lovell as these men were just as important to the achievement in space travel. The household names are the faces of the mission, these men were the brains behind it all. This is refreshing to watch because it doesn’t focus on the astronauts through the situations, it follows the technicians as they all have pressure placed on them to keep the astronauts alive through all of the missions.

Overall: This is a must watch for all the space buffs out there because it is another look at the biggest achievements in modern human history.

Favourite Performance in a Comedy Movie by a Non-Comedic Actor

Over the years of acting we have had plenty of comedic actors’ nail comedy and move into drama but quite often it has been more difficult going in the over direction. I have loosed the rules on this and will be accepting the first few performances by a serious actor who stepped into comedy and may be doing it a lot more often now.

This had to be one of the hardest decisions I have had to make in Opinion Battles, I was looking through lists of comedy films thinking who was a serious actor before make certain films. I had to make quick eliminations of Robert DeNiro for Meet the Parents as I feel he had shown ability in comedy before and even Robert Downey Jr for Tropic Thunder for similar reasons. I narrowed my list down to 4 actors Russel Crowe, Jason Statham, Arnold Schwarzenegger and Tommy Lee Jones before finally making my decision. First I eliminated Crowe because the film is brilliant but I personally feel Gosling gets most of the laughs. Statham from Spy who does steal the film but we don’t see him enough and Tommy Lee Jones from Men in Black because his dead pan expression shows he is still being serious with comedy happening around him.

I have gone with Arnold Schwarzenegger in Twins because when this film got released he was easily one of the hottest properties in action films and this role isn’t even an action comedy so we get to laugh at his innocent persona through the film and making him the body guard like figure to Danny DeVito whose mouth gets him in more trouble than it needs to always has protection from his long lost twin brother.

In the annals of history for me, there is no film quite like “Airplane.” It’s a deadpan satire of the “Police Squad” type tv shows as well as the mega grossing disaster films of the 1960’s and 1970’s. (“Towering Inferno,”  “Airport”) These became commonplace with films like Charlie Sheen’s “Hot Shots” and later morphed into film genre satire like “Scary Movie.” But film goers remember the best withe Leslie Nielsen as Dr. Rumack in “Airplane.” It’s bit and after bit, gag after gag the best comedic performance I recall seeing. I hope you agree and vote for it! Remember this quote before you vote!

Dr. Rumack: I am sure. And don’t call me Shirley

While I firmly believe that the film’s trailer was funnier than the film itself, even I have to admit that the normally oh-so-serious Ralph Fiennes delivers a surprisingly hilarious performance in this. His comic timing is really quite exemplary, hitting those zingers confidently, and proving himself to be a fine physical comedian as well. I mean, that little run after “She’s been murdered . . . and you think I did it” is genius!

He confidently ventured into comedy with this film and went on to do even more successful comedy in films like “Hail Caesar!” and “A Bigger Splash”

ALL together now: “TAKE YOUR HANDS OFF MY LOBBY BOY!”

Kate Winslet is a beautiful and elegant actress full of talent. She has pulled off a ton of wonderfully dramatic roles as early as when she did Rose in Titanic. There was a powerful role in The Reader and so much more. If you look at her filmography, its lined with a lot of dramatic roles except for this little romantic comedy that I adore, The Holiday. I do have to say that The Holiday is particularly fantastic because of Kate Winslet showing us that she can be so naturally comedic and entertaining and that Jack Black can dial it back but still be sweet and funny (but then Jack Black doesn’t fit here because he does a lot of comedic roles already.

Surely you can’t be joking!

We all know Nielsen as Frank Drebin, Mr. Magoo, and tons of other comedic roles, but beforehand he was known as a serious actor (like in The Poseidon Adventure as the Captain of the ship).

This role as the Doctor on the doomed flight is where we all got to know him for the comedic genius he was.

The first performance I thought of is Spencer Tracy as Captain T.G. Culpeper in It’s a Mad, Mad, Mad, Mad World. This is one of Tracy’s last roles and while he had certainly done romantic comedies with Kathryn Hepburn there was never anything this mad cap to my knowledge. He kind of has the straight man role in the comedy with all the madness going around him but that is really important because madness isn’t funny if there’s nobody to bounce it off of. He kind of has a big reveal at the end but he really sells it and holds his own with the greatest comedians of all time. It’s a hilarious movie and a great performance from a multiple Oscar winner Spencer Tracy.

There are potentially a lot of actors who could be in contention for this week’s round, but I had to go with Ryan Gosling in The Nice Guys. What a hugely pleasant surprise he was with the comedic chops he displayed in what I think is one of the best films he has been in, and certainly his best

role. He was phenomenal as Holland March, sharing terrific chemistry with co-star Russell Crowe and showing us what excellent timing is. With hindsight, we should have known he could be such a comedy goldmine – Gosling has one of the best dead-pan faces going, on-screen and in interviews. Why did we wait for so long to see him in this light?

My favorite performance in a comedy movie by a non-comedic actor would be Mandy Patinkin’s performance as Inigo Montoya in The Princess Bride. People must get sick of me saying how much I love The Princess Bride but the movie is perfection & Patinkin’s character is one of the biggest reasons why the film is so loved. His story of vengeance is timeless and his chemistry with Fezzik & Westley is charming & hilarious. Who doesn’t love Inigo Montoya? He never fails to make me smile, no matter how many times I watch the movie. 🙂

This battle’s concept left me torn between a few dramatic actors in comedic roles (Ricardo Montalbán in The Naked Gun came close), but then I realized that a comedic actor’s first switch from dramatic roles could count too. Given that, I had to choose Leslie Nielsen’s now classic performance as Dr. Rumack in 1980’sAirplane! Before that, he was known for straightforward dramatic roles in films like Forbidden Planet and The Poseidon Adventure, but one “don’t call me Shirley” later, he had revolutionized himself as a master of deadpan humor. Many more comedies would follow, such as The Naked Gun, but Airplane! was the start of them all and served as a then-unexpected makeover for Nielsen’s career.

Stanley Kubrick’s film Dr. Strangelove is undeniably a classic in the black comedy genre and is full of incredibly funny performances. But the best might just be from an actor that you would least expect from the rest of his body of work: George C. Scott. Playing the gum-chomping, Russian-hating, 5-year-old-in-a-man’s-body, General “Buck “Turgidson (just watch his face light up towards the end, as the reality of what repopulating American society would truly mean as far as his libido is concerned), Scott imbues the role with an incredible over-the-top performance that works perfectly for the tone the film. The rumor is that Kubrick asked Scott to go all-in for “rehearsal” takes, claiming the cameras were off. Of course, this was a lie, but it allowed the movie to capture choices that Scott would have refused to make had he known he was being filmed. Perhaps my favorite moment is a scene where, in the middle of a rant about the need to prepare for a counter strike, Scott loses his balance, rolls over backward, and gets up while continuing to speak as though nothing had happened. Also memorable is his tussle with the Russian ambassador (Peter Bull); he truely owns every scene he is in, which is saying a lot considering he’s often up against one or two incarnations of Peter Sellers (who does get to deliver the famous line, “Gentlemen, you can’t fight in here, this is the War Room!”). Especially when considering his famous turn later as General Patton, Scott turns in an incredible comedic performance that stands out as unique among his work and is easily my favorite by a non-comedic actor. 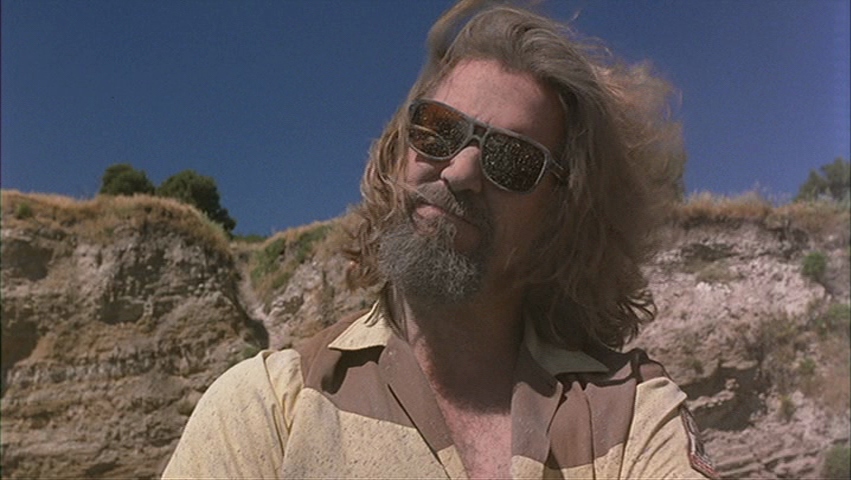 He was super hilarious and always so chill. There’s just something enigmatic about ‘The Dude’ and his laidback and cool demeanor and attitude. He seems to perfectly exist in his totally imperfect world, though his actual purpose in life is a big question mark. I can’t get enough of his antics and perfect comedic timing gets me going everytime. This is supposed to be an opinion battle where I convince you to choose my pick, but in the spirit of his dudeness, if you don’t like him, well that’s just your opinion man 😛