Opinion Battles Year Three Round One

Nicolas Cage has had one of the most fascinating careers in Hollywood today with one Oscar win to his name. his career started in 1981 has seen him take the strange roles, the brilliant roles, become the action hero of the 90s before tackling those bees in The Wicker Man remake before becoming somewhat of a parody of himself in recent years. It will be fair to say everyone will be remember Cage as an actor for a range of different reasons but today we are going to pick our favourite character of his career.

If you want to take part in the next round we are going to be picking our Favourite Oscar Winning Actor Performance in a Leading or Supporting Role, if you want to join email moviereviews101@yahoo.co.uk by 22nd January 2017.

Cameron Poe is US Ranger that gets put in prison for defending himself and pregnant wife from a group of drunks after he uses his skill to kill one of the men. He does his time without any complaint and when he is getting a ride home on a prison plane it becomes hijacked. Not wanting to leave his friend to die he plays along with the escape plan to help bring down the criminals. This film is a great portray of a man wrongfully imprisoned for defending himself, he is great at the limited combat times and mostly has the cheesiest one liners of all of his roles. Put The Bunny Back In The Box? I feel this is one of the most iconic leading roles in an action film of what was a brilliant decade for this style of action film.

“When a promised job for Texan Michael fails to materialise in
Wyoming, Mike is mistaken by Wayne to be the hitman he hired to kill
his unfaithful wife…” -IMDB

Nicolas Cage is at his best in this film. He portrays the
happy-go-lucky good old boy faced with a chance to do the wrong thing.
Dennis Hopper stars in this as the truly bad man who lies. cheats, and
steals. Cage learns that if he makes bad moral choices, a hailstorm of
consequences rains down on him. Still, in his typical cage fashion, he
struggles to stay true to himself.

There is some ironic humor here but mostly you see a guy down on his
luck and out of gas accidentally stumbling into mishaps. They may seem
small at first but very soon they become life and death events. You
find yourself asking, “What would I do if that money were in my face?”
and other everyman questions like this. In the final analysis, Cage is
the everyman of acting. We like the films when we can see ourselves as
him. He is nothing if not a character to identify with.

Charlie Lang – It Could Happen to You

I’m not a big fan of Nicolas Cage. I did a Top Ten of my favorite Nicolas Cage movies recently and put Fast Times At Ridgemont High as my number one (despite him only having an extremely small cameo). I won’t be rude for Opinion Battles, though – I’ll choose a proper role. 😉 Instead of trying to win the popular vote & going with Con Air (which I do like – it’s a guilty pleasure), I’m choosing Cage’s role as Charlie Lang in the lovely & sadly underrated It Could Happen To You. This was a simple yet effective romantic comedy in which Cage’s cop is short of cash for a tip for waitress Bridget Fonda so instead promises to share the prize if his lottery ticket wins (and, of course, it does). It’s one I’d recommend to any Cage fans who haven’t seen it. 🙂

My favorite Nicolas Cage role is as Ronny in Moonstruck. In the film he plays a bitter man who blames his brother for losing his hand. He meets Cher and the passion and chemistry is off the charts. This is a movie that feels like a play but without Cage’s intense performance it wouldn’t work 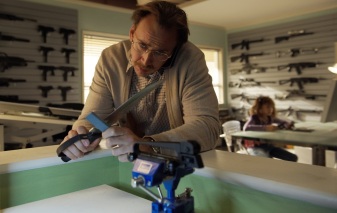 In this film, Nicolas Cage has a blast kicking ass, gleefully channelling Adam West in his Big Daddy persona (“we like you . . . we’re just not sure if we can . . . trust you”) and as a father who can teach you all about guns, fighting, butterfly knives and so on. 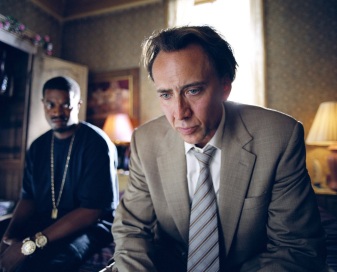 Ah, so many gloriously crazy performances from this man, yet I can only choose one… It has to be his turn as Terrence MacDonagh in 2010’s Bad Lieutenant – Port Of Call: New Orleans that gets my vote. It is a classic Nic Cage role in a film that, in my opinion, manages to maintain a great deal of cinematic decorum. What’s not to like about a cop whose cocaine addiction takes him to a place where iguanas sing and the souls of dead drug dealers dance at their murder scenes? My sentiments exactly.

Nic Cage is known for being an eccentric actor. Sometimes his over-the-top crazy comes off as overacting, resulting him to be viewed as the enigma that he is.  That’s not the case for him in Kick-Ass, where that cartooniness fits into the movie perfectly.  Cage plays Big Daddy, a vigilante who will use any means necessary to get revenge on the mob boss who framed him.  Kick-Ass is an amazing superhero movie and many of the best scenes are with Cage and his trademark erratic behavior, with a little bit of Adam West’s Batman mixed in for good measure.  If you want to see a wacky Nic Cage at its best, check out him as Big Daddy in Kick-Ass. You won’t be disappointed.

While Nicolas Cage has had some pretty bad movies lately, its hard to discount the fact that he has had many good roles. However, nothing quite beats his role as Benjamin Franklin Gates in National Treasure. There is smart and wits. Ben Gates is a fun character all around who sometimes gets carried away by getting to where he needs to go. Pretty much, the right way to describe him is that he easily gets overly obsessed. He is flawed but that is what makes his character even more believable.

It’s with embarrassing regret that I admit I can count on just one hand the amount of Nicolas Cage movies I have seen. Not only that, but I seem to have watched a couple of terrible movies he was in, too, which narrows my choices even further. However! There was one movie he was in that I loved, and have re-watched many a time, although you might not recognise him by sight.

In The Croods, Nicolas Cage voices Grug, the father of the family trying to stay alive in a historic world. Grug just wants to keep his family safe (except his Mother-in-Law) and hates change, but it’s wonderful to see his character grow and adapt as the movie goes on. Grug wouldn’t be so lovable without the expert voice acting of Nicolas Cage.

Being that I’m not a fan of Nic Cage and think he’s one of the most overrated actors working today, I liked his role in this film because, he wears a mask most of the time and it’s easy to forget he’s in the film.

This is a great film because it takes the idea of a superhero story and gives us a new perspective on the genre.

Ben – Views From The Sofa

This is because it is a less wacky Nicholas Cage but no less fun. In a movie that is clearly 90s action thriller and follows all the usual 90s action movie ropes, Cage manages to do something slightly different, playing the more straight-man in among the chaos and opposite acting legend Sean Connery. Their chemistry alone makes a lot of this film work. I also prefer his action-movie roles to his more dramatic one and this is a great example of a Cage action film but without the silly accent he used in Con-Air.

This was made a lot easier being favourite Nicholas Cage ‘role’ as apposed to favourite film. If we were talking films I would have struggled more. But Cage makes such an impression as the evil Castor Troy in Face Off, it was pretty much a no brainer for me (as well as it being a film I really, really like).

Castor is the bad guy we love to hate and Cage plays him well, in an over-the-top way that must have been a lot of fun. I suppose I should bring attention to the fact he does actually play Sean Archer for half the film too, which is kind of weird and never really occurred to me until I started writing out this Opinion Battle entry. But however great John Travolta’s acting (as Castor Troy) was, he was still playing Troy – the subject of this Battle, who was, indeed, Cage’s character. Okay?

Ok, full disclaimer: I am not a fan of Nick Cage. Of course, this makes my inaugural entry in the 2017 Opinion Battles somewhat difficult. In my mind, most Nicolas Cage roles are either goofy and eccentric or (bizarrely in my mind) action-oriented. So I’m going to go with a role that fits both criteria rather well: FBI chemical weapons specialist Stanley Goodspeed, PhD in the action-fest THE ROCK. He plays a fish-out-of-water type well; gets in some good banter with Sean Connery; manages to take out both Captain “Rocket Man” Darrow (Tony Todd) and Captain Frye; AND has to inject his heart with atropine. All before finding out the truth behind the JFK assassination. Well…gosh…

Nicolas Cage is known for performances that range wildly from Oscar-worthy to Razzie-worthy, but my favorite rests squarely between the two, being neither exceptional nor ridiculous – Ben Gates in the National Treasure films. I’ve always enjoyed American history and treasure hunts, and Cage does well as a disgraced clue solver searching for the lost Templar treasure. He manages some charm and humor but above all, determination to redeem his family name, and he doesn’t hesitate to do what needs doing, even stealing the Declaration of Independence or kidnapping the President (for all the right reasons, of course). I could have gone with his tear-jerking turn in The Family Man, but I could watch him in National Treasure any day of the week.