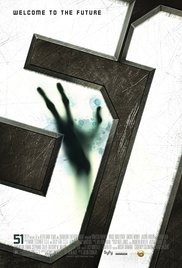 Plot: 51 chronicles what happens after political pressure from the American public forces the Air Force to provide a few well-known reporters with limited access to the most secretive base on the planet: Area 51. When one of the base’s hidden ‘long term visitors’ exploits this unprecedented visit as a chance to liberate himself and his fellow alien captives, Area 51 turns from a secure government base to a horrifying destination of terror.

Story: 51 starts when the government are finally going to let people into Area 51 for the first time with Sam Whitaker (Shea) and new blogger Claire (Branch). Colonel Martin (Boxleitner) is showing the guests around the base with the idea of showing just the simple ones rather than the real secrets.

With the tour happening around the base we see how the aliens held there start their own escape. The tour group must work together to survive while the soldiers on the outside also have to deal with the aliens coming up the levels.

51 is a horror sci-fi film set inside Area 51, we actually get to see the idea that aliens have been trapped there for decades and most importantly we get to see different types of aliens. This helps play into the conspiracy side to the story very well. When it comes to the survival side of the story there isn’t too much fresh happening here but it does make you wonder what abilities each of these aliens actually has while the film unfolds.

Vanessa Branch: Claire is an internet reporter with a reputation of pushing the limits to make sure she breaks the story, she isn’t one of the Colonel’s first choices to be part of the tour but while she is here she will look to break the big story. Vanessa is a solid strong leading lady for this horror film.

Bruce Boxleitner: Col Martin is the man who has to lead the tour group around Area 51, he doesn’t like the idea and will try to make this the simplest tour possible giving away only small amounts of details. Bruce comes off like a normal colonel you would expect to see in thi style of film.

Rachel Miner: Sgt Hanna is on the outside guarding the base she leads the men while having her own troubled past and reputation to live up to. Rachel is solid in this role which feels like a completely different story to the main tour.

Jason London: Aaron ‘Shoes’ Schumacher is a rookie soldier that is under the wing of Sgt Hanna, he wants to see combat but has to deal with not having this chance for now. Jason is solid in this role where we do get a few extra laugh from this film.

Support Cast: 51 has a supporting cast which includes different of soldiers as well as the fellow reporters, each one comes off slightly disposable through the story.

Director Review: Jason Connery – Jason gives us a horror that has fresh twists while being the standard survival thriller.

Horror: 51 is filled with blood soaked kills throughout the survival horror side of the story.

Sci-Fi: 51 takes us to Area 51 with aliens trying to escape their prisons which heaps all of the sci-fi side of the story involved.

Settings: 51 is set at Area 51 for the whole film which plays into the conspiracy side of the story.
Special Effects: 51 has low budget effects which work once we see the aliens made with practical effects.

Suggestion: 51 is one I feel the horror fans out there can watch late night on TV and get the enjoyment out of it. (Late Night TV)

Worst Part: Hanna and Shoes storyline seems out of place and almost talking to audience early on.