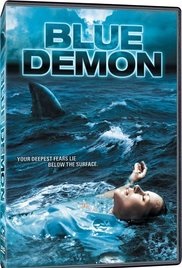 Plot: When sharks come from afar, searching for food find a beach for meat. A group of people must stop them before they head for the beach. Will they make it?

Story: Blue Demon starts as we learn about a government experiment gone wrong before follow four sorority girls breaking into the facility. One of the girls becomes dinner for the genetically created shark which finds former married couple Marla (Pfeiffer) and Nathan (Batinkoff) having to answer questions. Their boss Lawrence Van Allen (Woodburn) is having to close the experiment after his cutting of corners left the electrified fences down.

When General Remora (Fahey) arrives on the site with the idea of releasing the sharks in an act of defence to a potential terrorist attack on the coastline. When the sharks escape it becomes a race against time to stop them before the shark’s kill too many people.

Blue Demon follows a story that is easy to stand here and question but let’s face it we are not going into this for Oscar abilities writing. This is everything you want to see in a low budget video release, something fun with just having laughs when needed but never going too serious. This won’t win awards but is easy to sit through.

Dedee Pfeiffer: Marla is one half of the scientific former married couple working on creating these sharks, she is firmly behind having these sharks made as an act of defence rather than turning into weapons. Dedee is solid and does what you need to in this role.

Randall Batinkoff: Nathan is the other half of the team who is taking the same stance on how to treat the sharks and is trying to be very calm about the breakup of the marriage. Randall has good chemistry with Dedee which is needed in this role.

Danny Woodburn: Lawrence Van Allen is running the facility and is always expecting results, he sees this chance to impress the General as his chance to make the money that has been invested as well as being very much over the top in how he acts. Danny is solid and has good comic moments through the film.

Josh Hammond: Avery is the assistant in the research area who does all the odd jobs, he adds some comic relief through the film. Josh is solid without being too important for the most part of this film.

Support Cast: Blue Demon has a supporting cast which is mostly disposable characters but General Remora is extremely funny.

Comedy: Blue Demon has a couple of good moments for laughs without being overly memorable.

Thriller: Blue Demon doesn’t seem to keep us on edge as often as you would like to see.

Settings: Blue Demon keeps the settings in a lake make the appearance of a shark strange which works.
Special Effects: Blue Demon doesn’t have the best of effects but is what you would expect from this film. 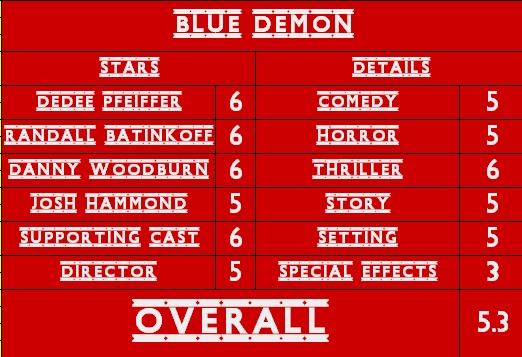