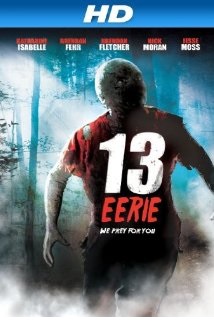 Plot: Six forensic undergrads embark on a scientific expedition to a remote island that was once used as illegal biological testing grounds for life-term prisoners.

Story: 13 Eerie starts when our 6 forensic students Megan (Isabelle), Daniel (Fehr), Josh (Fletcher), Patrick (Moss) Kate (Patterson) and Rob (Eisner) along with their driver former criminal Larry (Moran) heading to abandoned prison the 13 Eerie for a test under the instructions from Tomkins (Shanks). The prize is that two students will get a chance to move into the forensic science learning division.

When the groups start having technical issues that is only the beginning of their problems as the dead from the Eerie seem to be coming back looking to feed on the students. Is there something about the prison that Tomkins didn’t know about that has put everyone in danger and who will make it out alive?

13 Eerie comes off nicely but does have its’s flaws. First off the idea of these people learning how to deal with dead bodies and investigating what happened to them is very good concept because they shouldn’t panic easily. The problem is we learn very little about any of the characters before they get there with none of the students coming off as bad people while a couple do come off to dumb to be standing in this environment. We also only learn very thin ideas to what happened at the prison which does leave it feeling incomplete really. If you just want the blood and gore this is everything you would expect but you can pick plenty of holes in the story.

Katharine Isabelle: Megan is one of the students who I think is meant to be the hard working one who has earnt all her chances, she is determined to overcome an obstacle put in her way along the test but now she will have to face the undead to make it out alive. Katharine is always a great leading lady in horror.

Michael Shanks: Tomkins is the man running the test, he has created the crime scenes and is extra strict towards his students as they look to be the very best. He doesn’t listen to any warnings from Larry and ends up having to join the remaining students to fight the undead. Michael does a solid job in this role where he is the authority to the situation.

Brendan Fehr: Daniel is the most serious of all the students, he looks like he is going to be one of the two selected winners and isn’t afraid to get his hands dirty on the job. He takes charge of the situation when his partner goes missing. Brendan is good in this role where he is the smartest of the people involved.

Brendan Fletcher: Josh seems to be the slightly more deranged one that is enjoying the investigation of the dead bodies, much like Daniel he isn’t afraid to her his hands dirty when it comes to this job. Brendan does a good job in this role but is sadly only really supporting.

Nick Moran: Larry is the idiot driver and former criminal that is scared to be just going to this place because he has heard the stories about what has gone on there in the past. He does make for extra laughs because he is very clumsy. Nick gives us the required comedy light hearted side to the story we needed.

Support Cast: 13 Eerie has a supporting cast that are really just the disposable characters in the film.

Director Review: Lowell Dean – Lowell gives us a good blood and gore film but doesn’t have the best storyline decisions.

Horror: 13 Eerie is filled with plenty of blood and gore throughout.

Sci-Fi: 13 Eerie has the idea of being used with the undead coming back to life.

Settings: 13 Eerie puts our characters into an isolated location with history which works for all the concept behind the film.
Special Effects: 13 Eerie has great effects with the kills being used through the film.

Suggestion: 13 Eerie is one for the horror fans to enjoy but only if you like the blood and gore side of the genre. (Horror Fans Watch)

Kill Of The Film: Zombie Rob

Overall: Bloody gorefest that is enjoyable throughout