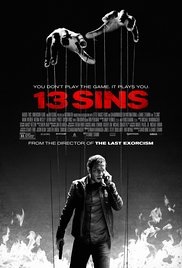 Plot: A cryptic phone call sets off a dangerous game of risks for Elliot, a down-on-his luck salesman. The game promises increasing rewards for completing 13 tasks, each more sinister than the last.

Story: 13 Sins starts as Elliot Brindle (Webber) about to get married to Shelby (Wesley) and start his own family but because he isn’t as ruthless in his salesman job he loses his job making it difficult to supporting his mentally disabled brother Michael (Graye) and his bitter father (Bower).

Running out of options a chance phone call promises him money for doing something as simple as killing a fly once complete Elliot gets a second phone call with the promise of more money for a task. With two challenges down Elliot get offered a chance to enter into a game to complete in 11 more challenges to get more money that could change his life forever.

When the challenge starts to become very twisted it grabs the attention of Detective Chilcoat (Perlman) but just how far will Elliot will go for the money.

13 Sins gives us a horror thriller that pushes our character to the limit which is why I do think this is a very enjoyable. I will say it starts out slow and puts the character in a position that you would expect them to take the challenge by not knowing how far they would be pushed. This helps us think this would be hard to say no to. I will say this really pulls you in but I do think the certain moments at the end feel forced.

Mark Webber: Elliot Brindle is a down on his luck salesman who is about to get married, have his own child all while supporting his mentally disabled brother and alcoholic father. When he gets phone call he gets a chance to end all of his money troubles by completing a set of challenges, this will test Elliot to the very limits leaving us to wonder how far he will do. Mark is great in this role making us feel like he really is an average man struggling.

Devon Graye: Michael Brindle is the mentally disabled brother of Elliot who is about to find himself back in a home if his brother doesn’t find money to support him. Devon seems like an important character that just seems to get forgotten through the final outcome of the film.

Rutina Wesley: Shelby is the fiancée of Elliot who is getting ever so upset with Elliot on the day of the challenges because he is coming off distant but her relationship is important to everything that is happening. Rutina is basic in this supporting role because we don’t get the screen time.

Ron Perlman: Detective Chilcoat takes the case that Elliot finds himself causing him to discover what has been happening for years. Ron is solid in this supporting role that has a moment that is worth the wait nearer the end.

Support Cast: 13 Sins has a supporting cast that is included in the game in ways you have to figure out how they are involved.

Director Review: Daniel Stamm – Daniel gives us a thriller that is shocking in places as we just have to see how far we see our character go.

Horror: 13 Sins has gore moments that shock but filled with suspense around the gore.

Thriller: 13 Sins keeps us on edge as we wonder what will happen next in the game.

Settings: 13 Sins doesn’t have the most iconic locations which helps make us think it is in a small city but with the bigger picture of the game doesn’t work.
Special Effects: 13 Sins has great special effects used throughout with the gore factors.

Suggestion: 13 Sins is one for the horror fans to watch. (Horror Fans Watch)

Similar Too: Would You Rather, Cheap Thrills

Tagline: You don’t play the game. It plays you. 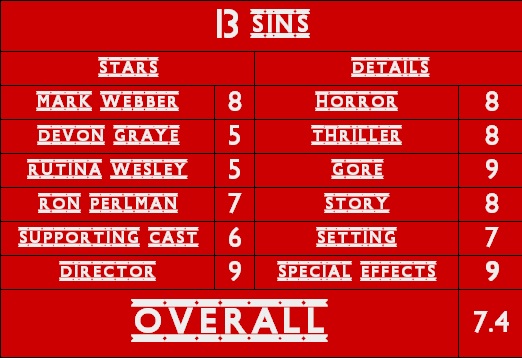