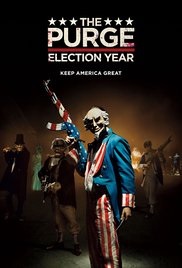 Plot: Years after sparing the man who killed his son, former police sergeant Barnes has become head of security for Senator Charlie Roan, a Presidential candidate targeted for death on Purge night due to her vow to eliminate the Purge.

Verdict: Improvement All Around

Story: The Purge: Election Year starts as the movement going against the idea of the Purge when people learn that the government has been using the Purge to save money. With an Election coming up independent candidate Senator Charlie Roan (Mitchell) who is campaigning to end the Purge after she was the sole survivor or a Purge attack.

The government has been lining up a clean-up job for The Purge this year with Senator Charlie Roan and other people who are against them and Leo Barnes (Grillo) is tasked with keeping her safe through the Purge. On the other side of the story we meet Joe Dixon (Williamson) who runs a small deli and has to protect it during Purge Night after his insurance rates go up.

With the Purge underway who will survive the night when tourists have come to America to join in the killing for the fun. Can the world be changed with the outcome of this night?

The Purge: Election Year brings us into the world of The Purge where we actually see people turning against the idea for the first time. We get the idea of having both sides of a political debate which would happen through a Purge like event. Sure we do have some poorly written characters which are filled with racial moments at times. Overall the story is easy to follow and does lack twists but is fully embracing the idea behind the film to the fullest.

Frank Grillo: Leo Barnes is the returning hero who is against the Purge after nearly committing the revenge crime a few years ago. He knows works as head of security of Senator Charlie Roan who if she wins will end the purge tradition. Leo trusts no one which is the only way he knows how to keep the Senator safe. Frank is great as the leading action star in this movie becoming the face of the franchise.

Elizabeth Mitchell: Senator Charlie Roan is the sole survivor of a Purge game with her family, she has led a campaign to run for President so she can end the Purge forever. With the Purge night in full effect she becomes the prime target for the government so they can continue their Purge night. She must find herself outside surviving the Purge with her bodyguard Leo and anyone else who wants to do the right thing. Elizabeth is strong in this role being a leader in the making.

Mykelti Williamson: Joe Dixon is a local deli owner who just wants to defend his deli during the Purge night but when he comes to the defence to the Senator he does the right thing with his connections from his shady past. Mykelti is good in this supporting role where he gets to take what feels like a Danny Glover role.

Joseph Julian Soria: Marcos is the loyal employee of Joe’s who just wants to protect the deli with his boss, he also has a shady past from his time in Mexico but now does the right thing. Joseph is good in this supporting role even if the character is slightly stereotypical.

Support Cast: The Purge: Election Year has a supporting cast which does include the only member to appear in all three films Dante Bishop. We also get a full array of colour psychotic characters who come out to Purge that give this the next level of dimension which we see improving each year.

Director Review: James DeMonaco – James gives us yet another improvement on the franchise which isn’t afraid to take on the social questions between the brutality offered.

Action: The Purge: Election Year could easily have the best pure action in a film so for this year to date, without any of the fantasy elements involved.

Horror: The Purge: Election Year does have brutal kills going on in the background of the film and while the concept is just about killing people for fun but the main story comes off full action.

Suggestion: The Purge: Election Year is one you should watch if you liked the first two, but it is also one for all the action fans out there to enjoy. (Action Fans Watch)

Overall: Improving upon the last one yet again as this franchise keeps coming off stronger and stronger. 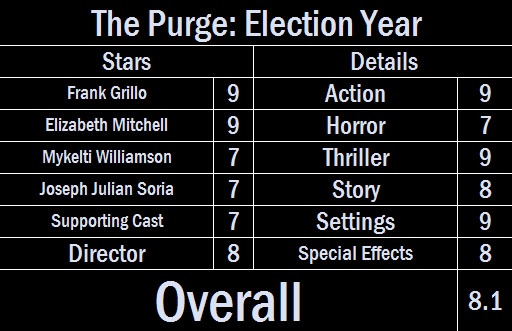 On the latest episode of Talking Stars we are joined by Kira from Film and TV 101 to discuss movies from Al Pacino and Bruce Willis.

Over the past few years I have come to dislike my own countries sitcoms, I have found most too loud and quite frankly not funny. I have decided to look back at some of the shows I watched growing up and pulling out my five favourite characters. This list doesn’t mean I think these are the five best sitcoms all around I just love these characters the most.

Gordon is the manager of Whitbury-Newton Leisure centre and he tries his utmost to make sure everything works day by day in his centre but things always seem to go wrong. Gordon does come off very condescending but accidently like this. Fun fact about this show which was filmed near my home town.

Hyacinth believes she is in the upper class of British living even changing the pronouncing of her surname from Bucket to Bouque. She is ashamed of her council living sister but is full of pride for her other sister Violet. Reaching retirement age, we watch how he long suffering husband Richard has to deal with all he plans to get noticed and have higher society guests at her candle light suppers. To me this is one of the best acted roles in sitcom history with Patricia Routledge stealing every single episode of the show.

Father Ted has to live on Craggy Island with the dim witted priest and the alcoholic priest waiting for his chance to get his own place to with what he wants normal people. We watch how he always try to impress the clergy who visit the Ireland but everything always seems to go wrong. Sadly this character never got a true ending due to the untimely death of Dermot Morgan.

This is from the 4th series of the show which is sent in World War I where Edmund is one of the soldiers in the trenches always trying to find a way out of which is a certain death. He has to put up with Baldrick and his cunning plans and George a high society idiot. It could easily be all five of the characters in this series which is arguable one of the best ever put to film but Blackadder has the interaction with all of them with each one showing his true colours. 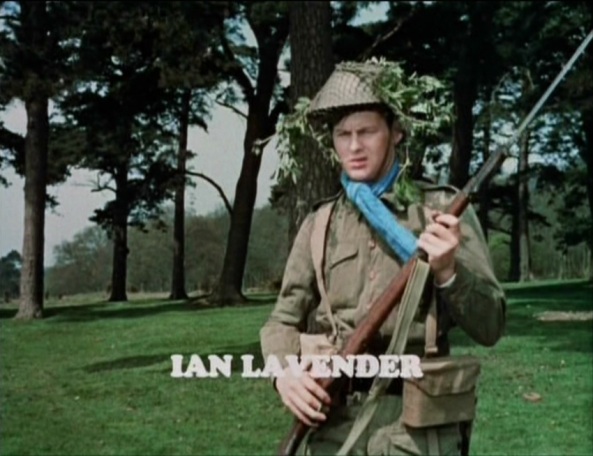 Pike is the youngster member of the home guards in World War II, he is with the older soldiers who can’t go into conflict as they look to protect the small town. While they never see conflict we see them prepare for it and Pike is always doing something wrong leading to being called ‘Stupid Boy’ by Captain Mainwaring. Pike is also involved in my favourite sitcom scene in history when the soldiers had captaure some German soldiers where he sings ‘whistle while you work, Hitler is a twerp, he’s half barmy like his army, whistle while you work’. Which leads to the German wanting to add him to his list. And the Don’t tell him Pike line.