Plot: An American man unwittingly gets involved with French werewolves who have developed a serum allowing them to transform at will.

Story: An American Werewolf in Paris starts as we follow three American’s Andy (Scott), Brad (Vieluf) and Chris (Buckman) who are on a daredevil tour around Europe. The latest location is Paris, hence the title where Andy has planned to bungee jump off the Eiffel Tower but on that night he finds a mysterious woman Serafine (Delpy) attempting suicide which he does prevent but is left with a bad bump on the head and a show.

When Andy manages to track down Serafine he talks her into a date where we learn something isn’t completely right with Serafine who has strength unlike anyone they have seen. Andy finds himself in the middle of a pack of werewolves were Serafine is the only one trying to save him once he becomes infected with the werewolf virus when the fellow werewolves are only after purity.

An American Werewolf in Paris brings the action to Paris yes the title gives it away really. What I have watching this is that they seem to want to make a sequel that feels like it is in a franchise before its time. It actually feels like it could be a prequel to an Underworld movie because realistically this has nothing to do with the original and is just messy. The only similarity is that we have an American trying to deal with slowly turning into a werewolf. Trying to include all the of cult like side to the story overcomplicates a story which should be easy to follow.

Tom Everett Scott: Andy is one of three Americans on a daredevil tour when he ends up bungee jumping off the Eiffel Tower. He does this while saving Serafine and ends up getting involved with her unaware that she is in fact a werewolf and he has been bitten. Tom

Julie Delpy: Serafine is the beautiful French girl that Andy has become mesmerized by, she tries to protect him but once he gets bitten we learn that she is a werewolf that she must now prepare for the world. Julie

Vince Vieluf: Brad is one of the friends on the tour it comes off that he is closer to him than Chris but he is killed early on and spends the rest of the film haunting him. Vince

Phil Buckman: Chris is the final friend who finds himself learning the truth first while trying to warn Andy the danger he is entering into. Phil is very much just a basic support character not really appearing too much after the first quarter.

Support Cast: An American Werewolf in Paris has a supporting cast that is quite small with most characters we meet just being disposable.

Director Review: Anthony Waller – Anthony does try to give us a good follow up but it just doesn’t reach the levels of the iconic original.

Comedy: An American Werewolf in Paris has a few funny moments but mostly due to the idea of idiot American’s in Paris.

Horror: An American Werewolf in Paris doesn’t reach the horror levels needed for the werewolf film.

Thriller: An American Werewolf in Paris tries to keep us guessing but ends up spending too much time on explaining either a cure or how it connects to the original.

Suggestion: An American Werewolf in Paris is one that you watch late night on television because it is an easy watch. (Late Night TV)

Tagline: Things are about to get a little hairy.

Trivia: This was in development for 6 years.

Overall: Simple horror that just doesn’t have the same punch the original has.

You know how us film fans always want to recast a film, well today we play the role of producer and this script has turned up on our desk. The next job is to cast the film as if it the year is 2016, the rules are as simple you can’t use anyone who is in the original film however good or bad you think the film is. So without further ado let’s cast this movie.

For this I will be turning a loved television show into a modern day one off film.

Why I have picked this star: 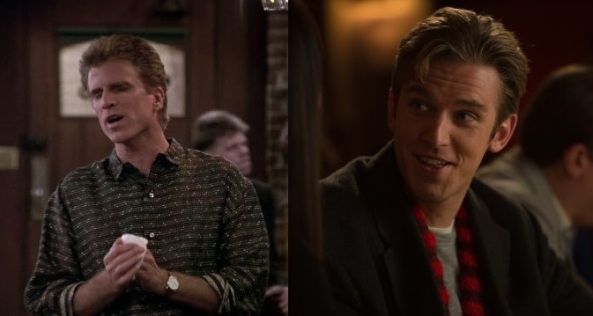 Sam is the former baseball star who owns the bar which he uses to meet women. He is loved by the bar patrons but when Diane turns up Sam starts to think about actually settling down, while in the show after she leaves Rebecca offers this once more. For this version of Sam, I will have both women involved with the bar and Sam is torn between the two. With this choice I can hear you from here going NO WAY but I do think Sam doesn’t need to be the one telling the joke he needs the funny in reactions to being shot down but needs the look of what he thinks all women want and hello Mr Stevens who could easily pass this role over and if you question his comic chops check out his work in Night at the Museum Secret of the Tomb.

Carla is bar maid that takes no shit from anyone who is working to supporting her kids who are a pain in her arse but you insult them you deal with Carla. She is tough as they come and could easily be the bouncer of the bar. Traylor doesn’t have the largest filmography with her most notable roles being in TV series Monk and Two Guys and a Girl opposite Ryan Reynolds but I do feel she could play the Carla character because we do see her snap easily through these shows which is needed for this role.

Cliff is the postman who comes in with his large amount of useless knowledge but best friend chemistry with Norm. I have pick John because along with my choice of Will we know they have brilliant chemistry that will work for this film.

Norm gets his own welcome whether he walks into the bar, he has his own sit which makes a trip down to Cheers a chance to get away from his wife. Norm has a best friend in Cliff and this choice needs perfect chemistry with the Cliff choice. Will and John have brilliant chemistry which will shine through in these roles.

Frasier finds himself in the bar when he starts dating Diane but knowing where her heart lies he sticks around to add a higher class to the bar. For this I will have the idea that he still loves Diane while being married to Lilith. This is yet again an unusual choice but this character in Cheers is very pompous before we get to know him in his own show so I am only judging him from this show and we have seen Nick can handle a mix of comic characters and working with the other talent he can pull off the smartest in the room.

Woody comes to Cheers to see his old coach, Coach only to find he has passed away. I want to keep the Woody character in the film version because I do like both characters but as I last watched Woody I am favouring him at the moment. I have picked Emory for this role because we need an actor who can play the innocent but good hearted young man and we saw this in Brooklyn.

Rebecca comes into the bar to help run the place because Sam has been struggling with the business side of everything. Rebecca offers another love angle for Sam which works for the duelling between her and Diane. Olivia has been in and out of comedies for a few years but with the role in Dredd we get to see a developing authority role and this will give her a chance to perform both these roles.

Diane is the woman that works as a bar maid, she thinks she is better than everyone else in the bar constantly having to deal with Sam coming on to her but always shooting him down. I want to keep this character very similar because she is need to be different to the other female cast members. Let’s make Diane British for this and who better than this star Miss Watson who can turn heads and most importantly push anyone she’s not interested in away.

How will this change the film: I do want to keep most of this show the same with his new cast, I do love this show so I don’t want this to be a bad parody of the show and I do think each of these actors can offer everything needed for these roles which is something we do need to see.

Will you be going to see this new version of the film?
Who would you rather see in this film?