Plot: This is a family comedy with an anti-bullying theme. When a new kid named Cory moves to town, he’s picked on by the school bullies. To protect himself, he doesn’t use his fists-he uses his brain instead! He scares the bullies off by fibbing that his father is a hit man for the mob. Word quickly spreads around and gets the attention of the REAL mobsters in town, too. Now his dad has the problem! As shenanigans between the family and the mobsters ensue, Cory must find a way to make things right. (Think “Home Alone” meets “The Sopranos.” But with NO GUNS! ) This is a broad comedy with lots of fun and physical humor.

Story: How to Beat a Bully starts as Cory (McLellan) moves with his parents Joe (Lauritzen) & Pam (Angell) to start a new life, we know Cory isn’t interested in moving but has to do what is best of the family. On starting his first day at school Cory finds himself the target of the bully Darryl (Tucker).

Cory comes up with a plan to stop the bully and his plan is to tell Darryl and the bullies that his dad is a gangster to strike fear into them. After his story starts to spiral out of control the whole neighbourhood goes out their way to be nice to the family without his parents even knowing.

How to Beat a Bully plays out like many of these kids struggling to fit into a new world and tries something drastic to change things. This does have a deeper meaning with the anti-violence to fight bully but also takes elements of what bullying can cause through words. The comedy comes from the story being made up by Cory as we see how everything gets out of hand thinking the family is Mafia works because the new to town concept. The highlight for me was the puns being used while they come off bad it is a sense of comedy I love to watch. This is one for the whole family to enjoy with laughs for all ages.

Grant McLellan: Cory is the young boy of the family who is not happy about moving, to make matters worse he starts getting bullied. To stop the bullies, he makes up the story that his father is from the Mafia making everyone start being nice to the family, but his little story turns heads of everyone in the town. Grant is good in this leading role which can be difficult in these styles of movies.

Ian Tucker: Darryl is the bully at the school that starts taking advantage of Cory but once the story about his father comes out. He starts worshiping Cory being the almost bodyguard at school. Ian makes for a good bully with the look to strike fear into fellow students.

Eric Lauritzen: Joe is the father of Cory, he is an insurance salesman but when Cory tells his story everyone in town turns him into the number one salesman before he gets mixed up with the actual local Mafia. Eric does a great job in this role where he comes off clueless to what is going on.

Elise Angell: Pam is the mother of Cory that has put up with Joe’s mistakes for years because he is an honest man, she has to take care of the house and the godfather before hearing the news of a local gangster. Elise is good in this role too where she keeps her to a more supporting role.

Support Cast: How to Beat a Bully has a good supporting cast that all do a good job with everything happening in the movie.

Director Review: Doug Bilitch – Doug gives us a good family film we can all watch.

Comedy: How to Beat a Bully has plenty of puns for the comedy which I did love.

Family: How to Beat a Bully is one everyone in the family can enjoy.

Settings: How to Beat a Bully puts the settings into a small town to show how difficult it would be for a young boy to fit in.

Suggestion: How to Beat a Bully is one for the whole family to enjoy having a little something for all. (Family Watching)

Best Part: The Puns are funny.

Overall: Family friendly film that can be enjoyed by all 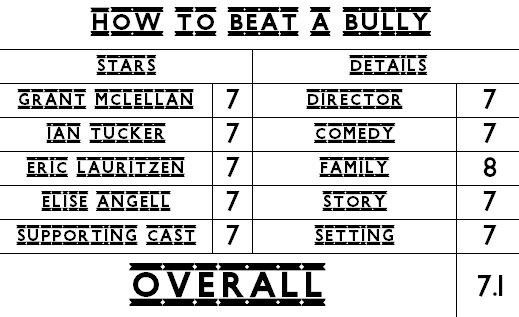 This is one of the biggest disappointments of the year already.
9) Return to Sender

Standard comedy that is easy to watch.
7) Battleship

Nonsense action film that is easy to watch.
6) Lavalantula

Chilling thriller that keeps you guessing throughout.
4) John Carter

Sci-fi film that does deserve more praise than it received.
3) What We Do in the Shadows

My favourite comedy from last year had to be re-watched.
1) The Martian

Take back the playground when How to Beat a Bully arrives on DVD April 5!

Home Alone meets Big Fat Liar in the “fun, whimsical, and absolutely enjoyable”* How to Beat a Bully, on DVD April 5 from Indie Rights.

The new kid in town is forced to protect himself from schoolyard tyrants with a big fat lie – that his father is a hit man for the mob – in director Douglas Bilitch’s raucously entertaining comedy for all ages.

“Cleverly written” (IMDB) by Marilyn Anderson and Richard Rossner, How to Beat a Bully has received the Dove Foundation Seal of Approval for families.