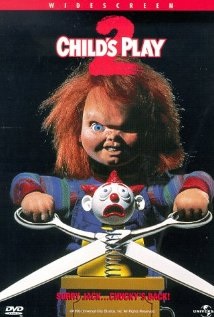 Plot: While Andy’s mother is admitted to a psychiatric hospital, the young boy is placed in foster care, and Chucky, determined to claim Andy’s soul, is not far behind.

Story: Child’s Play 2 starts as the company who produce the Good Guy Dolls have done clean-up work, having Andy’s mother put in a psychiatric hospital and rebuilding the doll, only for an accident to happen while fixing the doll up.

Andy (Vincent) needing to move on after the events gets put into foster home with Joanne (Agutter) and Phil (Graham) along with fellow adoption the older Kyle (Elise).

Chucky is back after the company rebuild the doll and he is hell bent on taking over Andy’s soul again. This time he is deadlier with his attitude towards killing anyone who gets in his way.

Child’s Play 2 picks up right where the last one finished and most importantly tackle the opening in a realistic method. Seeing the company try and complete clean-up to save face really works because without this the company could be considered over. Getting away from this side of the story because we don’t see anything else from this after Chucky is resurrected. When it comes to dealing with the foster parents I would have liked to have seen more especially as in the first film it was the mother being the strong female character rather than the teenage daughter. Making Chucky a lot more aggressive is a huge plus because we get a villain that could come from any angle and is willing to use any method on his victims. When it comes to sequels this builds on what we had first upping the threat to be one that will stick with you and the final act in the factory is brilliant.

Alex Vincent: Andy is our young boy still struggling with the emotional scares after Chucky tried to take his soul. He moves into a foster home but it isn’t long before Chucky comes back to try and take his soul, having no one to turn to he must convince a new group of people that Chucky is alive. Alex gives us a good performance from the young actor going through both peril through physical and mental side of things.

Jenny Agutter: Joanne is the mother of this foster family, she has a lot of patience with the troubled children as it looks like she is the one that can’t have children. She is the good guy when it comes to trying to convince Phil to keep Andy during the problems. Jenny is good but for the role she is playing she is wasted with how Chucky disposes of her character.

Gerrit Graham: Phil is the stricter father of the foster family, he always wants to control the behaviour of the two children while he gets controlled by his wife Joanne. Gerrit is a good but simple parental character which is quickly taken out living it to the stronger female characters to protect Andy.

Christine Elise: Kyle is the old child living in the foster home, she takes Andy in as a younger brother as she has been through the foster homes nearly her whole life, she teaches him the does and don’ts while trying to make herself have a future after her time in foster care. Christine is good in this role because the character goes through a big evolution from rebel to caring big sister.

Brad Dourif (Voice): Chucky is the killer Good Guy Doll that has come back to life and once again coming after Andy to move his soul into Andy’s body. He is just as psychotic and even more deadly this time as he wants to live in a human body and get revenge for what happened last time. Chucky continues to be one of the most welcome additions to the horror genre and now he is even angrier and deadlier.

Support Cast: Child’s Play 2 is rather small with nearly everyone you meet pretty much just being disposable characters.

Director Review: John Lafia – John gives us a great addition to the Chucky franchise with one of the strongest sequels you will see in horror.

Horror: Child’s Play 2 is a horror film that raises the stakes on the horror side of film with more kills, blood and killer Chucky.

Settings: Child’s Play 2 uses a more open setting with Chucky following Andy around town with the factory in the final act is perfect.
Special Effects: Child’s Play 2 has great effects throughout with how Chucky is killing or being harmed.

Suggestion: Child’s Play 2 is one for all horror fans to watch because it is just funny horror slasher. (Horror Fans Watch)

Trivia: Chucky appeared in a tuxedo at the 1990 Horror Hall of Fame Awards to advertise the theatrical release of the film. He was introduced by Robert Englund (Freddy Krueger).

Overall: Great sequel that helps continue to the franchise of the killer doll. 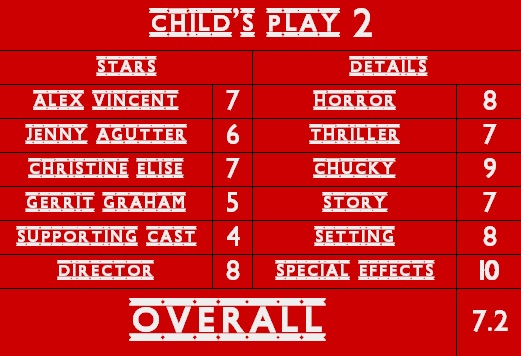