Plot: A group of five friends are terrorized at their getaway cabin in this remake of the 2002 film Cabin Fever (2002).

Verdict: WHY DID WE NEED THIS?

Story: Cabin Fever starts with the generic redneck character discovering his dog has been killed by a horrific flesh eating virus. Now time to meet out five college students Karen (Golightly), Jeff (Daddario), Marcy (Crocker), Bert (Ingram) and Paul (Davis) who have come for a trip away in, well you guessed it a CABIN. Though generic it is something the original couldn’t do and that is poke fun at not being able to have internet and phone signal etc yeah not new but for the series nice easy to get touch.

Back to the story we have the infected local who comes for help only for the idiot students taking out their car and only escape from the woods while attempt to kill the local. We are now left with the morale question of what they should do and what was actually wrong with the man, but let’s sleep on it.

Searching for help the friends split up because that always works right? Karen and Paul stay at the cabin while Jeff & Bert search for locals and Marcy goes for a casual row down the lake.

Joining back together the friends find one of their own infect but how is it being spread? Well we know this because it is a REMAKE so any twist is redundant for where this is going, but heck let’s just have a shot for shot remake and not try something original by locking the first infected friend in the shed overnight.

Cabin Fever the original is one of the best indie shock body horror films of all time, whether you liked the subject it had great effects and made Eli Roth a household name for horror fans. We had a couple of sequels, well one was a prequel that continued to tell the story bigger so that leads us to the big question. Why did we need a sequel? This was a chance to re-tell the story of where the virus came from giving everything fresh legs but in the end we get a basic remake that doesn’t even try to become original.

Gage Golightly: Karen is the girl next door type of girl that is on this trip with her friends, it is a chance for both her and Paul to spend time and potentially make their friendship something more. Karen is such a simple character that really doesn’t shine like the character should be the only stand out thing about her is that she is the first to be infected. Gage doesn’t give us much hope with this bland performance.

Matthew Daddario: Jeff is the boyfriend of Marcy that has his nice new car damaged by the man visiting them. I really can’t remember anything else he does. Matthew is one of the three guys who all look, sound and act the same through the film.

Nadine Crocker: Marcy is the other girl on the trip she puts up the fight and seems to be the only sensible character in the cabin. She works in this strong role but we did also need a lot more from the character. Nadine gets the risky scenes with her added nudity but really doesn’t stand out otherwise.

Dustin Ingram: Bert is pretty much the clown of the friends, he is there as the lone wolf who would be happy just to play video games and smoke weed, while he can’t do that he decides to shot him rifle which for some reason he has bought along with him. Dustin much like Matthew is hard to tell apart from the other two characters

Settings: Cabin Fever puts us in a cabin in the middle of nowhere which should make this an intense film.
Special Effects: Cabin Fever has effects that seem to be a step back from the original and its sequels.

Suggestion: Cabin Fever is just one to avoid really, keep to the original. (Avoid)

Favourite Quote: Karen ‘last night a guy came to our door for help and we get him on fire’

Chances of Tears: No, but I think Eli Roth might when he sees what they did to his film.

Chances of Sequel: Actually left open for one.

Tagline: You can’t run from what’s inside. 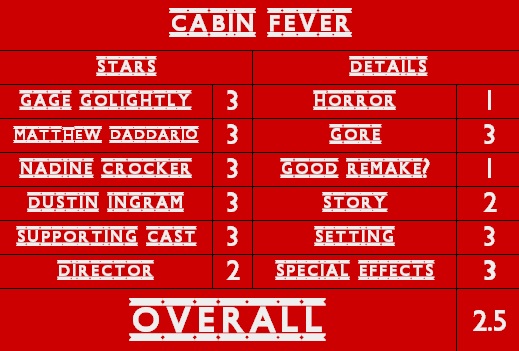