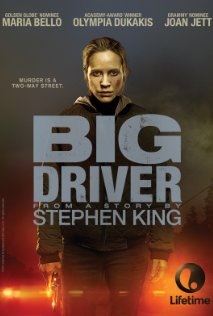 Plot: A famous mystery writer sets out for revenge after a brutal attack.

Story: Big Driver starts as author Tess (Bello) is off to meet with fans to promote her new book only to find herself stranded in the middle of nowhere. When stranger Lester (Harris) offers to help he starts off nice only turn nasty as he attacks and rapes Tess before dumping her body in a stream.

Surviving was only the beginning of her ordeal as she now must search for help but in her head she battles with the idea that what she wrote could have driven this man into doing this attack. Tess not wanting to admit the attack goes out on her own to get her revenge on the people involved in the attack.

Big Driver falls into the rape revenge story, let’s face it we have seen this before and this isn’t the most comfortable story to be watching. This has the typical Stephen King stamp on it where our leading character talks to her characters from her books which helps us understand her mind set. In all honesty this is very disappoint for what it could be, you don’t get as shocked as you should from the attack and the revenge just seems too easy because we meet everyone involved rather than few innocent suspects.

Maria Bello: Tess Thorne is a respected author that will on a journey for her latest book finds herself brutally attacked and raped. Not wanting to tell anyone about the attack in fear people think it is too much like one of her book characters she goes out for revenge on the man responsible. Maria is great in the performance in this role but is the only good one in the film. 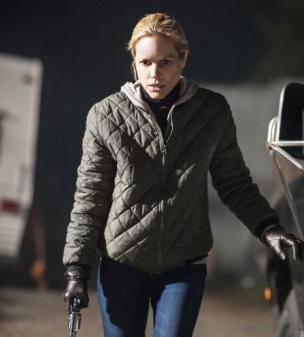 Ann Dowd: Ramona Norvell is a close friend to Tess who suggests the shortcut making her involvement a prime suspect for helping the attack happen. Ann is only in a couple of roles and doesn’t get enough time to show her character’s colours.

Will Harris: Lester is the man who attacked and raped Tess known locally as The Big Driver, he dumps Tess with all his other victims but has no idea for finding out Tess isn’t dead. Will is the look but doesn’t really work for the role.

Joan Jett: Betsy Neal is a local bar owner that offers Tess advice about the locals which does include Lester, she has a history being abused by men too. Joan again is only in one main scene which doesn’t get enough time.

Support Cast: Big Driver doesn’t have enough time to give us supporting characters.

Director Review: Mikael Salomon – Mikael doesn’t go into the darkness that the story could end up going in.

Crime: Big Driver gives us the crime story of the being a rape victim getting revenge.

Mystery: Big Driver offers us a mystery to who is involved with the rape.

Thriller: Big Driver tries to keep us guessing to what is going on and where it could go.

Suggestion: Big Driver is one to try but it isn’t going to be anything special for the King fans out there. (Try It) 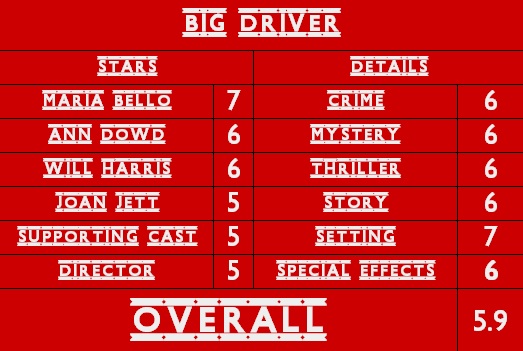