Plot: At the offices of a Japanese corporation, during a party, a woman, who’s evidently a professional mistress, is found dead, apparently after some rough sex. A police detective, Web Smith is called in to investigate but before getting there, he gets a call from someone who instructs him to pick up John Connor, a former police Captain and expert on Japanese affairs. When they arrive their Web thinks that everything is obvious but Connor tells him that there’s a lot more going on.

Story: Rising Sun starts as we watch a potential deal being handled between the Japanese and Americans to deal with the weapons, when a party is thrown in this event there is a murder of a woman during a sex act. Webster Smith (Snipes) is called into investigate being he is the liaisons officers at the White House, along the way he has to pick up seasoned Captain John Connor (Connery) who is on leave and is an expert on Japanese culture.

The unlikely pair have to work together to solve the crime where the prime suspect Eddie Sakamura (Tagawa) has a personal connection to Connor and not everything is as it seems, leaving them to unwrap the web of conspiracy.

Rising Sun is what you would have to put down as a traditional crime story that goes in the direction you would expect. We get the twists and the odd pairing having to work together leading everything back to where you would expect it to go. The crime has elements of conspiracy even though it is only about one murder. The story is filled with racial tension which is disappointing for the way the film is set.

Sean Connery: Captain John Connor is the expert on Japan who gets bought into the case because of his connections with the people involved. He has to guide Webster through the case helping him understand the way of thinking of the Japanese involved. Sean is good in this role very much against the type of character we have seen in the past with Bond.

Wesley Snipes: LT Webster Smith is a liaison to the White House and former cop who gets called into investigate the murder where he has to work with Connor. He has a shady past after being accused of a bride case even though it got thrown out. He has to put his problems aside and his differences with Connor to uncover the truth. Wesley is good in this role playing the role we expect to see from him.

Harvey Keitel: LT Tom Graham is the old partner of Webster who was also involved in the bribery case. He tries to just treat his cop work as a job and doesn’t seem to play sides. Harvey does good job in supporting role but considering he is important to the story we don’t see him enough.

Cary-Hiroyuki Tagawa: Eddie Sakamura is the prime suspect that is even the easy suspect, he must work with the two to prove his innocence for the crime he never committed. Cary-Hiroyuki is good in this role filled with mystery throughout.

Support Cast: Rising Sun has a supporting that you would expect to see in this type of film that all do good job.

Director Review: Philip Kaufman – Philip gives us a good action mystery thriller that does keep you guessing throughout.

Action: Rising Sun has the standard action you would expect to see without being too memorable.

Crime: Rising Sun brings us a crime story which on paper is just a murder but the conspiracy is what keeps us guessing.

Mystery: Rising Sun creates the mystery about who committed the murder which we have to witness who it could have been.

Thriller: Rising Sun keeps us guessing to what will happen next.

Settings: Rising Sun uses the settings well but nothing that is really stand out.

Suggestion: Rising Sun is one for the action fans to enjoy just switch off and enjoy. (Switch Off & Enjoy)

Best Part: Off chemistry between Connery and Snipes.

Trivia: Writers Michael Crichton and Michael Backes quit the project largely over disagreement with director Philip Kaufman that one of the lead characters should be changed into an African-American. 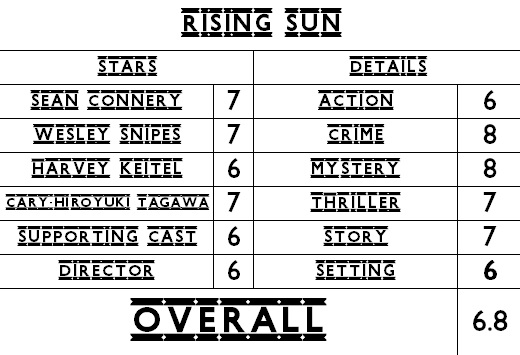