Plot: An insurance investigator begins discovering that the impact a horror writer’s books have on his fans is more than inspirational.

Story: In the Mouth of Madness starts as we meet John Trent (Neill) being taken into a mental asylum where he gets approached to tell his story. Rewind to see Trent at work as an insurance claims investigator, he can spot s fraud better than anyone else in the game. When he gets asked to investigate the disappearance of Sutter Cane (Prochnow) he has to team up with Linda Styles (Carmen) from the publicist as he start to figure out what has happened to the world renowned author.

The two travel looking for a place that is on no map and find themselves entering into a nightmare world of Sutter Cane’s very own creation.

In the Mouth of Madness really does keep you wondering just what the hell is happening from start to finish. The concept of bending the reality of what is real, written or other dimensional all works because you don’t know what to believe which is something I always like to see in a horror film. It is hard to go into complete details of what happens because a lot is very twisted filled and one that you can decide what you want to believe about what happens.

Sam Neill: John Trent is an insurance claims investigator and one that could sniff out any cons going on. He gets called up by publicist of world famous author Sutter Cane to find out where he as gone. He starts to think it is just a cover up but his nightmare is only just beginning as we know from the start he is telling the story from a mental asylum. Sam gives us a good performance in this role where he is convincing from start to finish because if you see if going crazy something has to be up.

Julie Carmen: Linda Styles goes with Trent is the search for Sutter Cane, she is a massive fan of his work which leads to her understand the place they find themselves in, inside one of his books. Julie gives a good performance in this supporting role.

Jurgen Prochnow: Sutter Cane is the mysterious author who has disappeared just before his latest work is about to be released. When Trent discovers where he is we learn that he believes has these powers over the world with his books. Jurgen gives a good performance as this mysterious author.

David Warner: Dr Wrenn is the doctor being told the story by Trent, that is all his involvement is even though he is the first one to actually listen to him. David does all he needs to in this role.

Support Cast: In the Mouth of Madness has a supporting cast that all work to help push the story be it outside the fictional world or within it.

Director Review: John Carpenter – John shows that he knows how to change and work with a concept that comes off original.

Horror: In the Mouth of Madness really goes into a world of nightmares for our character to find himself in.

Suggestion: In the Mouth of Madness is one for the horror fans to watch and enjoy because it is very twisted. (Horror Fans Watch)

Worst Part: Giving away slightly too much early on.

Trivia: The Sutter Cane character is clearly based on John Carpenter‘s friend Stephen King, even referencing King’s New England roots, with Hobb’s Corner filling in for King’s Castle Rock. Carpenter directed a film version of King’s Christine (1983). Additionally Michael De Luca had previously written the screenplay for the King adaptation The Lawnmower Man (1987). However, the characters say that Sutter Cane is even more popular than Stephen King.

Overall: Minding horror that is twist filled from start to finish that will leave you shocked. 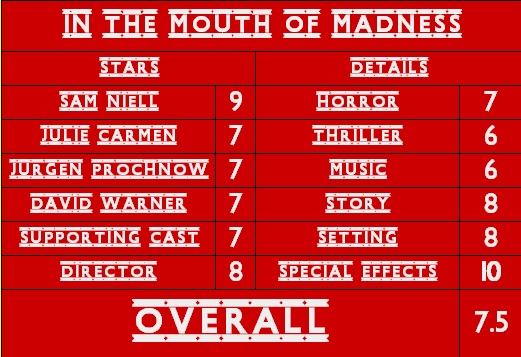 Today I will be look at Best Supporting Male. These are character who have shined in supporting roles and could easily have been able to be the star of the shows.

Mentions that could have been number one;

In this brilliant action film Colin Firth shines as the mentor to our lead with his dry comic lines and action set pieces.

Nux is the character that goes through the biggest development in Mad Max, he delivers the iconic line ‘What a day, What a Lovely Day’ and is the male character you remember from this film.

Idris plays the general of the child soldiers who pushes them all to the limits to make an army that no one knows how to deal with. This is a breath taking and shows just how good of an actor he really it.