In the tradition of Scream and Tucker and Dale vs Evil comes OMG… We’re in a Horror Movie!!!, available this month on VOD from LeoMark Studios.

Seven friends find themselves trapped in a horror movie in Ajala Bandele’s very funny and somewhat frightening love letter to the genre.

A movie about “What if’s” What if your life suddenly became a horror movie. Who would you play? What if your role was taken?What would you do. This is a horror comedy that answer those questions for seven “lucky” people who get to see what they would do.

Plot: The final eight candidates for a highly desirable corporate job are locked together in an exam room and given a test with one question. It seems simple yet confusing that soon, tensions begin to unravel.

Verdict: Would You Pass It?

Story: Exam starts when our 8 candidates known only by look Dark (Beck), Chinese (Chan), Blonde (Cox), Deaf (Fillingham), Black (Iwuji), Brunette (McIntosh), White (Mably) and Brown (Misty) enter the room where the Invigilator (Salmon) gives them the instructions. The instructions are as followed 80 minutes to answer the question, you can’t communicate with him or the guard or make a mistake on your paper. The only problem is the paper is empty and the remaining 7 have to figure out what the question is in the first place.

As the time continues to tick down the candidates start to learn more about the people in the room with them and the people they are learning to work for, we also learn that there is a pandemic going on in the outside world which is causing the secret nature of the exam.

Exam is a very simple concept for a film, it follows 8 people in a room looking to get the ultimate job but they have to listen to the words spoken very carefully to get the answer while they are busy looking for the question. This is a good look at how humans will act in a tight space under extreme pressure. There isn’t too much more to talk about only to say how this film is intense study on the human nature through the situation that could easily be set in any time period.

Colin Salmon: The Invigilator is the man who gives the instructions, he is clear and to the point with what the candidates can and can’t do during their 80-minute exam. Colin does a good job in this role as the well-spoken instructor.

Luke Mably: White is the first one to talk during the exam, he realises everything is in what isn’t said, British through and through he comes off cocky arrogant giving everyone the racial stereotype names and will do anything to make sure he wins this job. Luke does a good job in this role that really pushes them to their limits.

Pollyanna McIntosh: Brunette is one of the candidates in the room who speaks up about what is going on in the room, she takes a chance on an idea where she becomes the first victim of White’s games. Pollyanna does a good job in this role as a strong female character.

Jimi Mistry: Brown is a gambler who takes a back seat through all the action only speaking up to try and bring down any ideas constantly clashing with Dark. Jimi is good in this role where he looks out of place which is important for the character.

Nathalie Cox: Blonde also seems to spend most of the film watching from the outside joining in the ideas but never having one of her own. She doesn’t want to get her hands dirty but knows if she goes along with the ideas she will stay out of the target zone of the more ruthless candidates. Nathalie is good in this role even though she doesn’t get involved as much as the rest.

Chukwudi Iwuji: Black he wants to earn this job honestly, he is happy to work with the rest but doesn’t want to do anything unethical to get the answer. He makes a big difference in the room as he is the first and only person to stand up to White. Chukwudi is good in this role as the man able to put everyone bad points aside for honesty.

Adar Beck: Dark who seems to know a lot more about the company than she is letting on, we do learn her secret but her ability to read people makes her one of the best candidates in the room. Adar does a good job in this role trying to look smarter than the rest.

Support Cast: Exam only has three more members of the cast who don’t say very much, two are candidates who are eliminated early while the other is the silent guard.

Director Review: Stuart Hazeldine – Stuart gives us one of the most intense films in recent years that will keep you guessing until the final moments.

Mystery: Exam puts us into a mystery as we wonder what the question is let alone the answer.

Thriller: Exam keeps you on the edge of your seat as the 8 try to figure out what is going on.

Settings: Exam has the whole film set in one room for the exam and the time period it is happening in.

Suggestion: Exam is a film I would suggest to anyone to watch especially is you enjoy a film that makes you think. (Watch)

Awards: Nominated for a BAFTA for outstanding British Debut Writing/Directing

Overall: Thriller that will keep you guessing from start to finish

Rob and I have decided to make a twist on the challenge where we will be looking at Oscar related films first before moving into going back to look at different Oscar winners from the past. 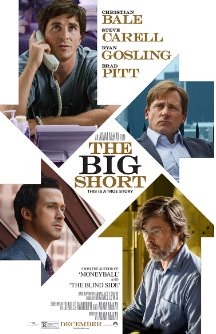 Plot: Four outsiders in the world of high-finance who predicted the credit and housing bubble collapse of the mid-2000s decide to take on the big banks for their lack of foresight and greed.

Story: The Big Short starts as Jared Vennett (Gosling) explains the how banking became the biggest industry in America until it all came crashing down in 2008. We go onto meet the few people that predicted this collapse Michael Burry (Bale) who makes a drastic step to invest against the housing bonds, Jared is has jumped on the bandwagon who tries to sell the idea to investor Mark Baum (Carell). When two young upstarts learn of the potential collapse they discuss it with former experienced banker Ben Rickert (Pitt).

We watch how Michael has to deal with his investors questioning his idea and Mark trying to expose all the fraud going on within America. Ben and his young bankers struggle to uncover what is really going on as they look like they will be losing all the money that put into this scheme.

The Big Short is a story that comes off important but is about an extremely boring subject. The story bounces between the character leaving us feeling confused about what each one is doing even when we get the characters talking to us the audience about what is happening it feels like they are just talking to us in a condescending manor. I do understand this one of the more important part of recent history but it is told in a way where we only seeing investor side rather than any of the victims of the story.

Christian Bale: Michael Burry is the mathematician who learns about this collapse in the future, he investors nearly all of his company’s money in capitalising on this happening as rumours start to circulate once he starts making his first moves. He is difficult to work with but know his stuff. Christian is great in this role with most of his scenes in one location.

Steve Carell: Mark Baum is an investor that suffered a personal tragedy but when his team learn what Jared is doing they want in as they investigate what is happening even if they start by losing money. Steve shows yet again that he can do serious roles with his great performance.

Ryan Gosling: Jared Vennett hears about what Michael was doing before jumping in on the idea, he sells the idea to Mark and others while trying to continue to make money himself. Ryan is good in this role without really getting enough screen time.

Brad Pitt: Ben Rickert is a retired banker that gets talked into helping to young bankers expose this scheme, he hates banking and the affects it has on people’s lives but believes he is helping show a real cause. Brad is good in this support role.

Support Cast: The Big Short has a massive supporting cast that all do well in the role.

Director Review: Adam McKay – Adam steps out of his comfort zone of comedy to handle an interesting story, but doesn’t give us enough to make this an easy watch.

Biographical: The Big Short shows how the bankers and investors dealt with the bank crash.

Settings: The Big Short uses a mix of settings which sometimes works but other times ends up getting mixed up.
Suggestion: The Big Short is only one to try because I feel people will get lost trying to keep up with. (Try It)

Best Part: The performances are great.

Worst Part: The story is hard to keep up with.

Believability: Based on the real events involved.

Oscar Chances: Could get some nods.

Tagline: This is a true story

Today I will be look at Best Supporting Female, I have given this a couple more than worst but the most part of the best are in leading roles.

Mentions that could have been number one;

Abigail is the infected daughter of Arnold Schwarzenegger who is slowly turning into a zombie as the two spend their final days together.

In a film I didn’t really enjoy that much the highlight of the film for me was Rose Byrne in the villainous role stealing every single scene she is in.

Great performance from the young actress as the daughter of the boxer with plenty of personal problems.

In a film with 3 outstanding performances Alicia gives us a brilliant performance as the humanoid robot.