Plot: An android endeavour to become human as he gradually acquires emotions.

Story: Bicentennial Man starts when the Martin family Richard (Neill), Ma’am (Crewson) children Amanda and Grace get a android which is accidently named Andrew (Williams). Andrew becomes part of the family with his unique programming making him the only android who can think for himself. Richard decides to continuing teaching Andrew the ways of the world including pushing his creative ways.

As the years go by the house has become filled clocks and the girls have grown up with Amanda (Davidtz) known as little miss becoming his close friend. Richard decides to open a bank account for Andrew to sell the clocks he has been making for him for years giving Andrew a chance to move forward with his world of looking after himself.

Andrew requests his own freedom from the family and sets out on his own voyage of discovery and his ultimate desire, to become human and truly understand all of the emotions humans have and with the help of Rupert Burns (Platt) everything could become a reality for Andrew.

Bicentennial Man tells the incredible story behind a seemingly every day android who starts to think for himself, he wants to learn about the world. We see how he wants to go about making himself human so he can understand feelings, emotions and most of all love. The quest follows him through 200 years of ups and downs but ultimately he has to overcome the hardest of all challenges. This story ends up following through the lives in a way that never overcomplicates things and we just see the one story without seeing how the rest of the world is changing. I think this is one of the best stories of trying to find a place to fit in I have seen.

Robin Williams: Andrew Martin is our android who goes on an incredible 200 yearlong adventure where he starts out as a ‘household appliance’ before learning on his own free will. He gets taught along the way and soon decides he wants to be a human being. We watch how he watches people live and die in his quest to become human making him truly unique to the world. Robin gives one of his most underrated performances where he gets to show his serious side and comedic side through the film.

Embeth Davidtz: Amanda Martin/Portia Charney, first Amanda is the youngest of the two girls Andrew first got to know, he watches her whole life and the two have a bond that could never be during her life time. Portia is Amanda granddaughter who Andrew turns to because she is the only family left in her future life, the two eventually put their difference behind them and become madly in love and it is with her Andrew challenges to become a legal human. Embeth gives a brilliant performance where she plans a full range of ages as well as multiple characters.

Sam Neill: Richard Martin is the man who bought Andrew but quickly learnt that he was different to the rest of the androids in the world. He teaches Andrew the ways of the world giving him a living. He watches his own family grow up his two girls and Andrew leave but he always knows he has had a brilliant life. Sam gives us a great performance in this role where he plays the caring father and man.

Oliver Platt: Rupert Burns is the man trying to conduct research on Andrew models of androids, he works on a shoestring budget but Andrew teams up with him to make the research reach the next level as the two spend their whole lives trying to turn Andrew into a human leading to them both making ground-breaking breakthroughs in medical advancements. Oliver gives us a good supporting performance which works well with Robin’s performance. 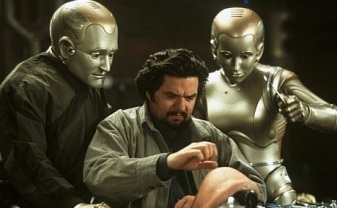 Support Cast: Bicentennial Man isn’t the largest and each character has a different reaction to Andrew, some good some bad.

Director Review: Chris Columbus – Chris gives us one of the most charming films of his career which does included bigger and more popular films.

Comedy: Bicentennial Man has good use of comedy that just takes away the serious side of certain moments but isn’t over the top.

Romance: Bicentennial Man has a love story that shows just how long people can wait to have their love legally validated and whether certain things are making sense in the real world.

Sci-Fi: Bicentennial Man brings us into the future of robots in the real world and while we see advances in technology that will improve life for humans.

Suggestion: Bicentennial Man is one I think people should watch, I am aware it wasn’t the critics favourites but it is very enjoyable. (Watch)

Worst Part: We do miss a lot of the life Andrew lives.

Chances of Tears: Yes you could have some.

Oscar Chances: Nominated for an Oscar for Best Make Up

Tagline: One robot’s 200 year journey to become an ordinary man.

Trivia: Disney asked that the budget be cut by approximately $20 million, and when the film was released on Christmas Day, it flopped at the box office. Robin Williams blamed Disney’s marketing and the loss of content the film suffered because of the budget cuts. As a result, he fell out with Disney again.

Overall: One of my personal favourites and a beautiful story 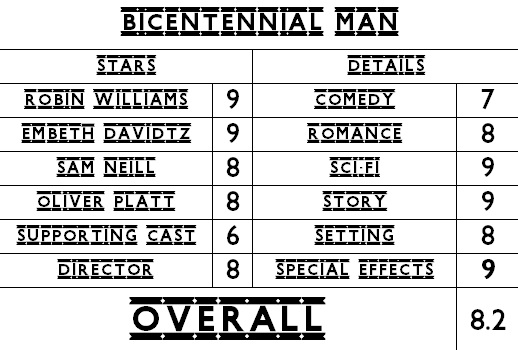 This documentary follows one man as he wants to make a tribute to one of his good friend’s son after he is murdered, this is truly a heart breaking and shocking film.

Adam Sandler’s Christmas & Hanukkah movie which is one that is good if you can see past Sandler’s humour.

A group of ghost hunters spend the film stuck in a church hall where they have to figure out what is haunting them. Nice simple horror that is enjoy non the less.

Pregnant woman moves into a new house along with her husband only to find herself being haunted in her time alone in the house. Is she losing her mind or really being haunted?

When Earth gets a message from space the world has to work out what the message is and communicate back, this is good because it doesn’t involve any alien invasion.

This dystopian world shows just what it means to think as it is considered a crime against the nation. Very bleak film that still does stand the test of time.

Remember, remember the 5th of November, this film follows the mysterious V trying to bring down a strict government running the country using the Guy Fawkes story.

This ‘Horror’ film is just plain painfully to watch.

Horror in the skies as we follow five friends trapped in their plane during the storm and they are not alone up there.

Pixar back to their best here for my second viewing of this film this year.

The Best – Inside Out