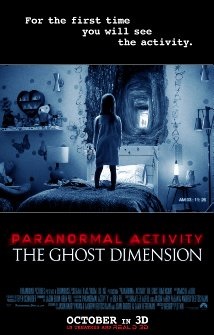 Plot: Using a special camera that can see spirits, a family must protect their daughter from an evil entity with a sinister plan.

Verdict: Been Here Seen This

Story: Paranormal Activity: The Ghost Dimension starts by reminding us what happened in the Paranormal Activity set in 1988 the third one I think. We move onto meet the new family Ryan (Murray), Emily (Shaw) and Leila (George) who get a visit from Uncle Mike (Gill) and Skyler (Dudley).

The family discovers an old camera that seems to be out of focus but is picking up a blur that when you enter into the blur you end up going into an underwater feeling. After finding old videos Ryan and Mike get a haunting glimpse into the ghost dimension when one of the girls on tape describes the decoration in Ryan’s daughters room. This makes the residents of the house think the camera can identify ghost and most notable Toby, but what do the ghosts want with this family?

Paranormal Activity: The Ghost Dimension seems to put a random family into the house where the previous films have taken place, we try to deal with who Toby is and the people behind the cult might be but not enough because like all the Paranormal Activity films we lack that protagonist to come back and face the demon. We are left going around the same old circles getting nothing new with the scares, oh wait we actually get to see Toby which is a problem as that is why we love Toby not knowing what he looks like. I will give this positives that it actually goes in a direction we should have seen a long time ago.

Chris J Murray: Ryan is the father of the house who finds the old camera with added abilities that shows the haunting of his daughter but still ends up doing the same things as all the over male character through the whole series. Chris does a basic job and is behind the camera for the most part.

Brit Shaw: Emily is the wife and mother of the household who see the haunting happening but let’s her husband deal with the issues as they try to work together to find a solution. Brit does a basic job giving the screaming performance when it comes to the demon.

Ivy George: Leila is the daughter of the family who is being haunted by Toby but she sees it as an imaginary friend not knowing the danger she is in. Ivy gives a good performance for the young actress that shows that a child can see fear in different light to the adults.

Dan Gill: Mike is the brother of Ryan’s who comes to stay with the family to get over a break up over Christmas, he works with Ryan to understand what is going on with the camera and the hauntings. Dan does also gives a basic performance but by now we don’t need too many good performances in this sort of film.

Support Cast: Paranormal Activity: The Ghost Dimension has a small supporting cast in a family friend, priest and people from the found footage. They all do enough without really doing anything special.

Director Review: Gregory Plotkin – Gregory brings us an average horror that is a drag in the most part but the final act really is edge of your seat stuff.

Horror: Paranormal Activity: The Ghost Dimension enters into the let’s throw stuff at the camera and make you jump throughout without really succeeding in it.

Worst Part: We have seen it all before.

Chances of Sequel: Hopefully not.

Tagline:  Every secret will be revealed.

Trivia: Including this movie, the franchise has an accumulative $18 million budget. The first 5 films of the franchise have, altogether, grossed a total of $811 million.

Overall: It ended well once it all got started 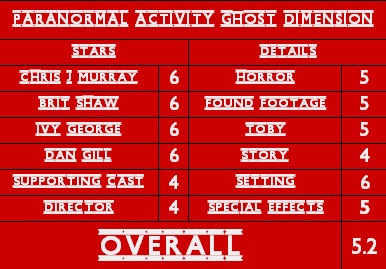 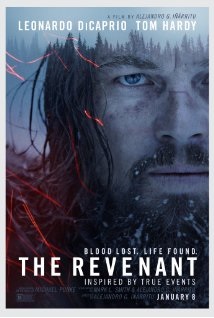 Plot: In the 1820s, a frontiersman named Hugh Glass sets out on a path of vengeance against those who left him for dead after a bear mauling.

Story: The Revenant starts as Hugh Glass (DiCaprio) and his frontiersmen including John Fitzgerald (Hardy), Andrew Henry (Gleeson) and Jim Bridger (Poulter) come under attack by the locals Indians who take out large numbers of the men before fleeing looking to find a way back home. While guiding the men back to safety Hugh gets savagely attack by a bear leaving him on deaths door as the few remaining men have to make a difficult decision about what to do next with him.

When Hugh gets abandoned he is left with nothing but the desire for vengeance on the people who took everything from him, as we watch a truly broken man in body and in mind set out against impossible weather condition to get his revenge.

The Revenant is going to be talked about as one of the best films of the year and simply put, it deserves the praise it is getting. The story of revenge all comes of brilliantly, while each character is bought into the story to bring us to the overall outcome. The triumph against the odds is hard to watch with the battles against nature shows how desire for revenge can get through anything. While there isn’t too much dialogue you simple don’t need to spend any time listening to what is happening because it is all visual.

Leonardo DiCaprio: Hugh Glass is one of the frontiersman who knows the area the best, he leads the men around danger, he is part of this with his son Hawk after the rest of their family is killed. When he gets attacked by a bear he ends up finding himself on deaths door as the rest of the men leave him to die, he just won’t quit as he comes for all the people that left him there to die. Leonardo gives us one of his best and hardest most brutal performance of his career here. 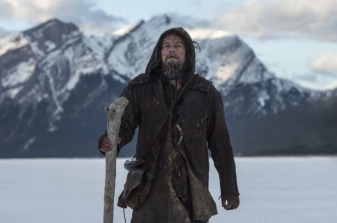 Tom Hardy: John Fitzgerald is the frontiersman who is always looking out for himself, he wants to get away from the enemy quickly by leaving people behind before he makes the final decision on leaving Hugh, he is with Jim Bridger and his example is teaching him about how to survive. Tom does a great job in this role playing the character opposite to DiCaprio’s.

Domhnall Gleeson: Andrew Henry is the leader of the frontiersman who lets the correct people make the decision while using his higher education to keep them grounded and healthy. Domhnall gives us a brilliant supporting performance showing that he really is a major player in the acting world.

Will Poulter: Jim Bridger is the young man who is part of the frontiersman, he is left with Fitzgerald to make sure Hugh gets a proper burial but is tricked by him into leaving him alone, but along the way he learns a valuable lesson about surviving in the situation they find themselves in. Will is also brilliant in this supporting role with great scenes with Hardy.

Support Cast: The Revenant has a brilliant supporting cast that all give us performance worthy of the film itself with everyone looking like they are part of the story.

Director Review: Alejandro Gonzalez Inarritu – Alejandro gives us a visual masterpiece that will get talked about for years to come.

Adventure: The Revenant shows the dark but stunning adventure Hugh must go on for his revenge.

Thriller: The Revenant keeps you on the edge of your seat as you never know what Hugh will come up against next.

Western: The Revenant uses the western time period to show the scenery as our characters are being put through.

Settings: The Revenant creates visual settings that will make your eyes just go wow as we see the harsh condition the story goes through.
Special Effects: The Revenant has brilliant special effects especially with the animal related scenes,

Suggestion: The Revenant is one of the best films this year and has to be watch by all. (Watch)

Oh My God Moment: Hugh versus the Bear.

Believability: Based on real events of the story of Hugh Glass.

Trivia: Tom Hardy has stated that he doesn’t read scripts and at one time was due to star in Splinter Cell (2017), he wanted to play a soldier but Leonardo DiCaprio begged him to read the script for this movie. Hardy read half the script and accepted the role.

Overall: Visual masterpiece this year that will show you just how far one man will go for revenge

While this film does come off complicated once you realise what is going on it really is one shocking film to enjoy.

The cannibal film that breathes fresh life into the sub-genre.

This horror is very unique which is a plus but I do think it goes too far into the weird.

When a small town in America come under attack a group of high school kids lead the rebellion against enemy.

5.      Jurassic World – The reboot of the franchise which does work well but something doesn’t quite work for me about but I can’t put my finger on it.

Oscar winning movie that does come off very ranty throughout the film.

Steve Martin ‘comedy’ sorry I just don’t like Steve Martin but certain side stories really do come off funny with Keanu Reeves stealing the film.

The zombie horror comedy that I don’t enjoy as much as other people out there.

The action comedy following a top cop sent to a small town where a killer is on the loose, this is slightly too long because the final action scene is fun.

Sci-fi part of the trilogy that all works well because the comedy is toned down and we get to focus on a serious storyline about how things change for people in life.