Plot: A disturbing mystery lurks on a old backwoods farm brought to new light when a traveling camera team arrives… seeking the one and only Hans Crippleton.

Story: Hans Crippleton Talk to the Han starts with Barnaby Hunt (Hankins) on the latest episode of Horror Hunts in search for the latest paranormal mystery. This week’s episode involved meeting Hans Crippleton (Ward) who is known as the judge of all things horror being a collector of the horror merchandise.

Hans lives with his family on a farm along with his redneck family and we watch how Barnaby interview Hans and his family about the origins with how they just live with zombies around them.

Hans Crippleton Talk to the Han tries the hardest to be a mockumentary which works to a certain level but after that this story just comes off insulting to everyone involved. We get to see the family deal with their personal issues on camera in what really comes off uncomfortable. While I do understand this is meant to have a satirical side which is a type of comedy I do like, this just doesn’t reach the levels required to reach the funny levels.

Kevon Ward: Hans Crippleton is the leader of the Crippleton family that has become famous leaving his roots to struggle with the zombie infection, he becomes more selfish without worrying about his family. Kevon gives us a very annoying performance in this role with a much disappointing character.

Andy Hankins: Barnaby Hunt is the host of the Horror Hunt who is trying to figure out the curse behind the Crippleton family. Andy does what he can with the performance without really excelling.

Heath C Heine: Cousin Bumpkin is a member of the family that comes off less intelligent but also envious of Hans success. Heath is the funniest of the character involved in the film.

Irene Leonard: MaMa Crippleton is your typical redneck mother bigger than the rest of the family but the boss of the household. Irene does a basic job in this role.

Support Cast: Hans Crippleton Talk to the Han has the supporting cast that all end up giving us the same level of performance in as the rest completing the family.

Comedy: Hans Crippleton Talk to the Han doesn’t have too many laughs involved.

Horror: Hans Crippleton Talk to the Han doesn’t give us too much horror either.

Suggestion: Hans Crippleton Talk to the Han is on to avoid really, it might appeal to horror comedy fans. (Avoid)

Best Part: Hard to find one.

Worst Part: Where do I start.

Tagline: This has been Hans approved

Overall: Disappoint comedy horror that comes off insulting rather than funny. 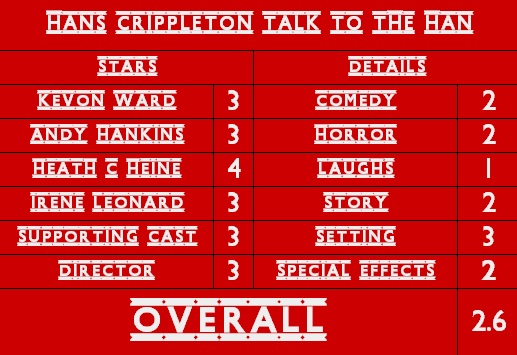