Plot: In a world ravaged by a virus that turns people into cannibals, a pregnant woman (Alice) manages to survive. Alice, in the company of two other men, strives to reach an island untouched by the plague. Meanwhile, a dangerous individual is on the trail of a mysterious girl, which causes Alice to realize that the Zombies are not her biggest and only threat.

Story: Anger of the Dead starts when Alice (Sparta) learns that she is pregnant just as she hears about the zombie outbreak starting, it comes close to home when her young daughter becomes the first victim and while searching for her husband a man Stephen (Bizau) rescues her giving her the news about the city.

4 Months later Stephen, Alice and Peter (Segal) are travelling for a new hiding place, while we meet Rooker (Stielstra) has been experimenting on woman who has now escaped as they must look for this dangerous but mysterious woman (Giorgetti).

Anger of the Dead tries to balance two storylines which don’t meet until the final 15-20 minutes which doesn’t help with where the film goes. I do have many issues with this film one being the whole film seems to be set on one road, having windows open in the car really doesn’t make sense, we never full learn what Rooker is up to or how many people are with him. I do think this film has too many flaws for any recommendation which is hard to say about a zombie film.

Marius Bizau: Stephen is a random guy that saves Alice in the opening breakout as the two look to survive the zombie outbreak in their own way. Marius struggles in this performance where he never looks like a leading actor.

Aaron Stielstra: Rooker is the leader of a group who are experimenting on survivors as they look for a cure. He is utterly ruthless killing anyone who goes against his orders along with their families. Aaron is a very dark character but never really ends up getting the final moment a villain needs.

Desiree Giorgetti: Prisoner who is being experimented on by Rooker and his men, she is forced into suffering as they look for a cure only to escape leading her to be hunted down by him. Desiree is solid in this role but never gets into the role either.

Support Cast: Anger of the Dead really doesn’t have too many memorable supporting cast members that even make it to the end of the film.

Director Review: Francesco Picone – Francesco tries to give us shocks through the film but forgets to bring in enough on the horror side of the film.

Horror: Anger of the Dead uses just the plain old zombie with nothing new, fresh or memorable.

Suggestion: Anger of the Dead is one that only zombie fans will watch, and even they might not enjoy it. (Zombie Fans Try)

Best Part: This may take a while.

Similar Too: Rise of the Zombies

Plot: After five-year-old Jack and his mother escape from the enclosed surroundings that Jack has known his entire life, the boy makes a thrilling discovery: the outside world.

Story: Room starts on Jack’s (Tremblay) 5th birthday, Jack lives in a room with his mother Ma (Larson), they have lived there for at least all of Jack’s life getting what they need from Old Nick (Bridges) who visits while Jack sleeps. The two are imprisoned in the Room where Ma has to lie to her own son about the world to protect him from Old Nick. The truth is easy even if shocking to deal with but once they escape Jack learns about the world for the first time, while Ma has to deal with the changes the world has gone through since she was last outside the Room.

Room does something not a single before it has ever done, it shows the real effects of what would happen to a mother who had experienced the outside world before being imprisoned as well as showing how leaving a Room for the first time can open up the eyes to the innocent. The film could have only covered the action, thriller mystery side of the story along with a criminal case but this only shows the human effects to our two victims. When it comes to story we get to see something almost perfect that will stick with you for years to come, because this could happen to someone in real life.

Brie Larson: Ma is the mother of Jack, she has taught him that everything in the room is all that there is until one day she decides to tell him the truth as they look to escape the room and discover the world for themselves. Brie gives one of the best performance of the year throughout here.

Jacob Tremblay: Jack is the young boy just turning five living in the room with his mother. He gives us his version of the world showing how innocent he is even through the situation which he is in happens to be much more serious. Jacob is brilliant in this role for such a young actor.

Support Cast: Room has a supporting cast that all gives great performance helping with the changes that Ma and Jack have to go through.

Director Review: Lenny Abrahamson – Lenny gives us a film that will end up being one that sticks with you for years and will be one of the best seen this year.

Drama: Room shows the effects that the situation would have on the victims showing just how difficult it would be continuing.

Settings: Room uses the settings brilliantly with the room being the prison and seeing how Jack sees the world for the first time feels innocent throughout.
Suggestion: Room is a film you simply have to go and watch. (Must Watch)

Best Part: I am only going to mention the time it happens as not to give away what it is, just before the Hour mark.

Believability: While the story is fictional, the reality this could have happened or be happening.

Awards: Nominated for 3 Golden Globes including Best Picture, Actress and Screenplay, along with a string of awards.

Oscar Chances: This is be nominated and should win a few.

Overall: Brilliant, stunning, get my thesaurus to fill in the rest of the superlatives for this film. 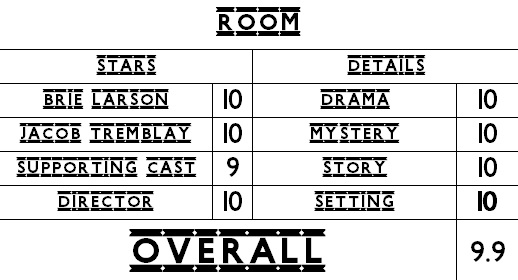