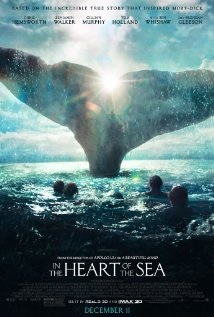 Plot: Based on the 1820 event, a whaling ship is preyed upon by a giant whale, stranding its crew at sea for 90 days, thousands of miles from home.

Story: In the Heart of the Sea starts as author Herman Melville (Whishaw) tracks Tom Nickerson (Gleeson) the last remaining survivor of the whaling ship the Essex to learn the story of what happen on the ship all those years ago. We move to meet Owen Chase (Hemsworth) a brilliant whaler who upon his next leave expects to captain a ship, he finds himself having to the First Mate to rookie Captain George Pollard (Walker) as they set out with their crew to hunt whales.

In the Heart of the Sea is the story behind the fictional story based on the true story. The idea the story is being told doesn’t help this story because the character telling the story wasn’t involved in every scene of the film, but once you see past this we get to see a story that really comes off well. The hunting scenes are hard to watch because it is such a rare scene to see now a days. I do think this is a brilliant story of survival which is all about getting home. The lack of supporting character development doesn’t help us enjoy the story.

Chris Hemsworth: Owen Chase is the experienced whaler who reluctantly has to work under Pollard who isn’t prepared to be a captain in this game. He clashes with Pollard but keeps delivering results to help make their trip shorter only to find himself stranded with the men after an encounter with giant white whale. Chris does a great job in this leading role showing his full star power. 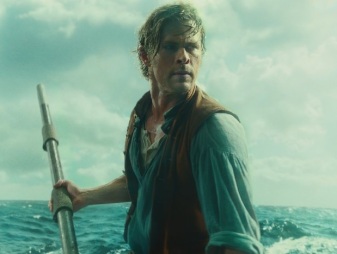 Benjamin Walker: George Pollard is the Captain of the ship who has to win over the men even as he clashes with Chase, he makes decision that Chase opposes which could put the men in danger, after the ship gets sunk he must lead his men to safety while being chased down by the sae whale that sank their ship. Benjamin does a good job in this leading role but sometimes doesn’t have the power over Chase needed at the start. 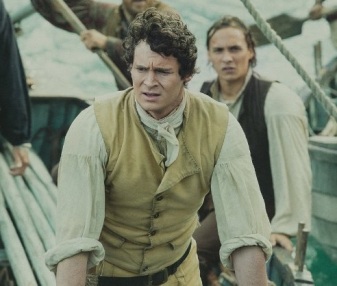 Brendan Gleeson: Tom Nickerson is the last survivor of the Essex that ambitious writer Herman Melville turns to for the story of what happened, he doesn’t want to talk about what happened but this one time he will give the full story. Brendan is good in the supporting narrator to this story.

Ben Whishaw: Herman Melville is the author trying to finish his story of Moby Dick and this one night hearing the story from Tom Nickerson will give him the final pieces to his story. Ben does well in this role with the man being told the story.

Support Cast: In the Heart of the Sea has a supporting cast that doesn’t seem to get used as well as it should with all the character actors involved.

Director Review: Ron Howard – Ron gives us a good story with brilliant effects but lacking of development of supporting characters.

Action: In the Heart of the Sea has breath taking sea based action with the destruction caused by the whales.

Adventure: In the Heart of the Sea shows the adventures of the whalers as they come up against the giant white whale.

Biographical: In the Heart of the Sea shows how the story Moby Dick came about.

History: In the Heart of the Sea shows how in history whales were hunted for the oil.

Thriller: In the Heart of the Sea keeps us on the edge as we wonder who will make it back alive.

Suggestion: In the Heart of the Sea is one to watch to learn the basic idea behind the legendary story of Moby Dick. (Watch)

Believability: Based on the true story of the Essex, a whaling ship that was attacked and sunk by a sperm whale in the southern Pacific Ocean in 1820. The incident inspired Herman Melville’s “Moby Dick”.

Tagline: From the director of Apollo 13 and A Beautiful Mind.

Trivia: Herman Melville never actually sailed aboard the Essex. He did however sail on a whaling ship called the Acushnet. 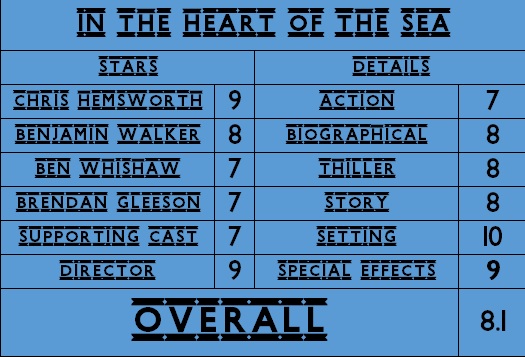