Plot: Enjoying a peaceable existence in 1885, Doctor Emmet Brown is about to be killed by Buford “Mad Dog” Tannen. Marty McFly travels back in time to save his friend.

Story: Back to the Future Part III starts picks up right where part II ends with Marty (Fox) having to turn to Doc Brown (Lloyd) of the past to help him save Doc Brown from the future from the past. Doc Brown has ended up in 1885 while Marty is in 1955, in 1955 Doc Brown must team up with Marty fix the time machine and go back to save Doc Brown after they discover that Doc gets killed one week after he wrote the letter to Marty.

Marty arrives and ends up making an enemy with Buford ‘Mad Dog’ Tannen (Wilson) the badest man in the west who has already made an enemy out of Doc Brown. We are left to watch the pair work out how to fuel up the DeLorean and go back to the future. 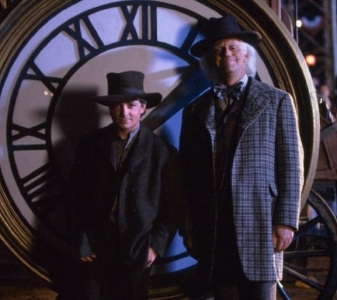 Back to the Future Part III completes the saga with wonderful enjoyment by going back in time even further with the western theme. I liked how this continues the adventure to a new level and shows enough respect to what will happen later in the story. This is the perfectly completion to a trilogy that can easily be watched in one go and not feel old.

Michael J Fox: Marty McFly continues this adventure through time as he goes back to 1885 to save Doc Brown but he ends up getting stuck there as the two have to find a way to go back to the future. Michael does it great job in this role where he completes the final chapter of the saga. 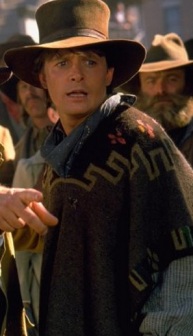 Christopher Lloyd: Doc Brown must first help Marty go back to the old west but while there the original Doc Brown must then learn his new fate before returning to the future but he has finally found love. Christopher gives his best of the trilogy performance where he gets to shine with his story unfolding. 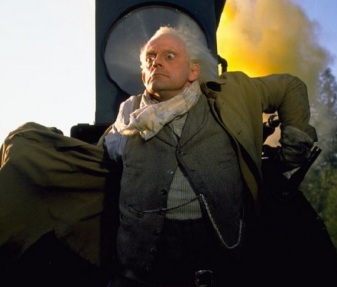 Mary Steenburgen: Clara Clayton is the new love interest of Doc Brown and how he ends up saving her life, she ends up putting a difficult decision in Doc’s mind as he has never found love before. Mary is a welcome addition to the story that is much need as she becomes the strongest female character in the series.

Thomas F Wilson: Buford ‘Mad Dog’ Tannen is the badest man in the west, he is responsible for Doc Brown’s death, he clashes with Marty as he first goes back leading to a final showdown between the two. Thomas does well in yet another role in the series showing he can look the part in any time period.

Support Cast: Back to the Future Part III has the supporting cast works really well and you get to see them all in their roles through a different time periods.

Action: Back to the Future Part III brings in the wild west action into the story which all comes off very generic for the ideas.

Adventure: Back to the Future Part III finishes the saga off which ends up becoming one of the greatest of all time.

Comedy: Back to the Future Part III has the funniest moments in the franchise with where ti all ends up going.

Sci-Fi: Back to the Future Part III uses the idea of sci-fi world of time travel but steps away from it slightly more.

Western: Back to the Future Part III brings us into the western world and makes it easy to watch rather than just settling with the idea easy to use style.

Suggestion: Back to the Future Part III has to be watched once you have seen the rest of the saga. (Watch)

Favourite Quote: Doc Brown ‘It means your future hasn’t been written yet. No one’s has. Your future is whatever you make it. So make it a good one, both of you. ’

Tagline: They’ve saved the best trip for last… But this time they may have gone too far.

Trivia: When Doc and Marty are at the drive-in preparing the DeLorean for the trip to 1885, Marty mentions Clint Eastwood and Doc replies, “Clint who?” In this shot, there is a movie poster on the drive-in’s wall showcasing Revenge of the Creature (1955) and Tarantula(1955), containing some of the first film appearances of a young, then-unknown Eastwood.

Overall: Brilliant conclusion to one of the great set of films ever made. 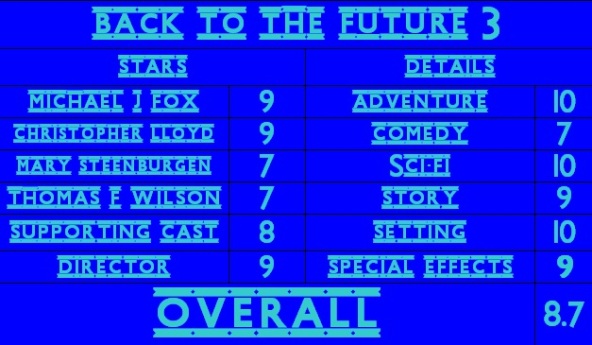