Plot: An anthropologist goes to Haiti after hearing rumors about a drug used by black magic practitioners to turn people into zombies.

Story: The Serpent and the Rainbow starts Haiti 1978 following a funeral. We meet Dennis Alan (Pullman) an anthropologist comes to the Amazon. Dennis finds himself drugged and left to find his own way out of the Amazon. Back home in Boston Dennis get his latest job offer which is to travel to Haiti to uncover the story behind Christophe (Roberts) a man buried after being declared dead only to be found alive one week later.

Dennis has to work with local doctor Marielle Duchamp (Tyson) who has been looking into the idea of zombies walking among the living. Dennis has to work with the locals including Lucien Celine (Winfield) who points him in the right directions of the man Louis Mozart (Jennings) who can make zombies all while having to avoid Dargent Peytraud (Mokae) who will get to any lengths to scare Dennis away from Haiti. When Dennis gets involved he learns the new terror of voodoo magic and raising the dead.

The Serpent and the Rainbow is partial based on a true story which works for adding extra scares to the film, we investigate the idea of voodoo magic bring people back from the dead or making people look dead but only just in a deep trance. I liked hos this film created this idea really well but we do lack the real answers to what really was going on and the lack of the scientific side of the story doesn’t help. I do think the it comes off scary when we see what Dennis goes through though.

Bill Pullman: Dennis Alan is an anthropologist who is sent to Haiti to look into the voodoo zombie rituals being performed in Haiti but what he discovers puts his life in danger as the locals don’t want an American looking into their beliefs. Bill gives us a great performance where he ends up giving us great scared reactions to everything going on.

Cathy Tyson: Marielle Duchamp is the local doctor that Dennis has to work with to uncover the zombie rituals going on in Haiti. She is a radical which also makes her an enemy of the country. Cathy does a good job in this supporting role working with Dennis through the film.

Zakes Mokae: Dargent Peytraud is the military man who sees Dennis as a threat to his country and its beliefs, he will push for answers about what Dennis wants and he has no boundaries. Zakes gives us a solid supporting performance and shows just how dark voodoo can make someone go.

Paul Winfield: Lucien Celine is the connection pointing Dennis in the right direction to find the voodoo man that can give the answers about zombies in the country. Paul works well in this role but only really ends up being the man explain what is going on.

Brent Jennings: Louis Mozart is the man who can create the zombie powder, but he goes to great lengths to keep his secrets. He doesn’t trust Dennis to start with but after having his bluff called he ends up giving his own secrets. Brent is very entertaining in the role of the maker of the powder.

Support Cast: The Serpent and the Rainbow has a supporting cast that all seemingly don’t want an outsider learning about the voodoo drug, but we also have the people who are trying to get the drug to make money of.

Director Review: Wes Craven – Wes shows us that he was a brilliant horror director by building the scares nicely going into a world that very few films have tackled.

Horror: The Serpent and the Rainbow has well built scares with most real horror happening in dream sequences.

Suggestion: The Serpent and the Rainbow is one to watch because you will never see a film about voodoo that is this good. (Watch)

Worst Part: More science was needed for the powder.

Kill Of The Film: Man at the door.

Believability: It is based on a real story and it is left to you to believe what you want to believe.

Trivia: According to article about the film from Fangoria #71, original cut of the movie was 3 hours long but Wes Craven felt that it was too long and talky so it was cut down to 98 minutes. It was then test screened to the audience and their reactions were favorable.

Overall: Voodoo thriller that will leave you gasping for breath. 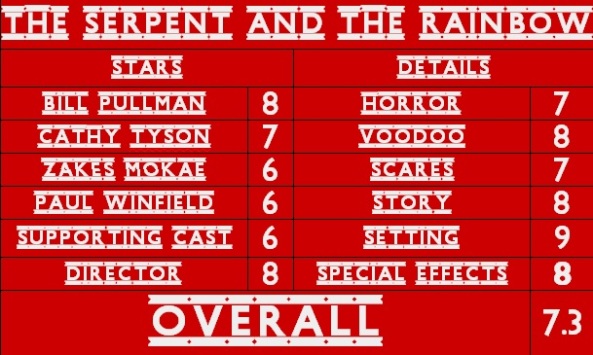