Plot: A widowed mother and her son change when a mysterious stranger enters their lives.

Story: Hearts in Atlantis starts an adult Bobby Garfield (Morse) receiving news of a childhood friends death John Sullivan in military service. The bad news continues as Bobby finds out that the other member of the three friends Carol has also died, leaving him to take a trip down memory lane.

Wee move back to when Bobby (Yelchin) was 11 years old with his best friend Carol (Boorem) and Sully. Bobby’s mother Liz (Davis) struggles for money making his birthday present disappointing but he is happy with being able to spend time with his friends. To help with money they rent out a room and their new tenant Ted Brautigan (Hopkins) who comes in full of mystery.

Ted offers Bobby a chance to earn some money by simply reading the newspapers and keeping an eye out for people who are to get him as he knows everyone in town. As the mystery about Ted grows Bobby gets a chance to grow up in a way he never thought it could. 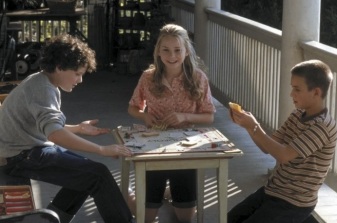 Hearts in Atlantis is a drama that brings us the coming of age tale in a subtle manor, it shows how looking back on childhood will be amazing because things will have changed. It also puts us in a position of wondering just whether to believe Ted’s story as we learn about his abilities as it also plays into the ideas of government ideas. Somehow without being the most amazing story this film always gets me with its simple side or just how the little things were important in growing up. I personal really enjoy this one for all those reasons. (8/10)

Anthony Hopkins: Ted Brautigan is the mysterious stranger who moves into the spare room at the Garfield household. He has the ability to read minds but is on the run from something he doesn’t let us know who is after him. Anthony gives us a good performance where we see him in a stable role. (7/10)

Anton Yelchin: Bobby Garfield is the 11 year old boy who lives with his single mother who is happy with the friendship he has with Sully and Carol. When Ted moves in he starts to learn life lessons while working on trying to protect him an unknown enemy. Anton shows that he was going to be a bigger star one day. (7/10) 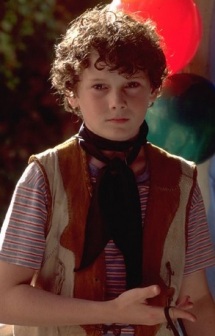 Hope Davis: Liz Garfield is the mother of Bobby who is always struggling for money but we really see she looks after herself when it comes to money. Hope gives a good dimension to this character. (7/10)

Mika Boorem: Carol Gerber is the first love Bobby, they grew up as youngsters and we follow this period of her life with Bobby as they experience the first chapters of the romantic lives. Mika does a good job showing she was going on to something more. (7/10)

Support Cast: Hearts in Atlantis has the supporting character you would expect to see in a coming of age story as well as the old Bobby played by David Morse.

Director Review: Scott Hicks – Scott brings us a beautifully shot film that will touch you. (7/10)

Drama: Hearts in Atlantis uses the coming of age angle for the drama side of the story. (7/10)

Mystery: Hearts in Atlantis does keep you wondering what Ted really has done or his ability. (9/10)

Settings: Hearts in Atlantis re-creates the look of the time period in question well. (7/10)

Suggestion: Hearts in Atlantis is one for all the coming of age movie fans. (Coming of Age Fans Watch)

Worst Part: I can never find one.

Tagline: What if one of life’s great mysteries moved in upstairs?