Plot: A man wakes up in the wilderness, in a pit full of dead bodies, with no memory and must determine if the murderer is one of the strangers who rescued him, or if he himself is the killer.

Story: Open Grave starts with Jonah (Copley) waking up from a near dead state bones clicking all around him as he tries to figure out his surrounding in the early stage of a storm. The horror dawns on Jonah when he finds himself inside of an open grave of dozens of bodies along with a gun, he does get rescued by a mystery person on the outside.

Upon reaching the house he finds out the house is filled with Lukas (Kretschmann), Brown Eyes (Ho), Nathan (Morgan), Sharon (Richards), Michael (Wrottesely) , every single person doesn’t remember a thing, know where they are they just have a card that tells them who they are. The group have to figure out what is going on but is the killer really among them or still stalking them waiting to finish off what they started.

As the group start searching for answers they start to discover what was really going on leading us to a place where we have to continue decide who are the good guys and bad guys all while the subjects start fight back.

Open Grave brings us a mystery that keeps us on our toes from start to finish, I do think the film gets hugely miss-sold because it makes it out that we will see a serial killer and the film goes in a totally different direction. I did like how this film ends up going because you never really know where it is going and even with the hints we only end up asking more questions. The overall idea of using the solving a plague idea works because we to wonder about what caused it and how it could really be cured. In the end I found this to be one of the most surprising films I have seen in recent years even if it echoes another favourite film of mine. (8/10)

Sharlto Copley: John/Jonah is the man who wakes up in the open grave, he ends up joining forces with the other members who have no memory a they try to figure out what has been happening but all the clues show he isn’t in the same group of friends as the rest of the cabin. He does start to have flashbacks about what happened before waking up where he was. Sharlto brings his star power giving us a solid performance. (6/10) 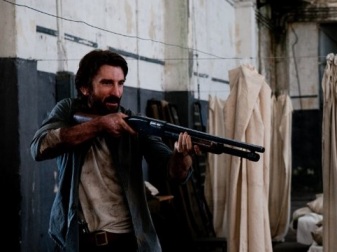 Thomas Kretschmann: Lukas is one of the people who wakes up in the house and takes an instant dislike to John as he questions who John is to the rest of them as John is the only one who doesn’t wake up in the house. He tries to take charge of the situation while figuring out his relationship to the rest. Thomas gives a solid performance but never pulls off the full side of his character. (6/10)

Josie Ho: Brown Eyes is the mute who doesn’t understand any of the languages being spoken which adds to the terror for her character as she has no way to communicate her worries about what is going on. Josie works well in the mute but is mostly used to keep everything left in a question about what is happening. (6/10)

Joseph Morgan: Nathan is the man who believes the house could be his, he speaks many languages apart from the one Brown Eyes speaks and tries to keep things together from inside the house. Joseph does a solid job in the supporting role. (6/10)

Erin Richards: Sharon is one that ends up going with Jonah in search for answers but the two only end up find more questions, she can control Jonah’s temper but who is she really related too. Erin does well in this role but only ends up in a supporting role. (6/10)

Support Cast: Open Grave only has a couple more supporting characters that are either the ones that die early or the ones that are already infected with what has been taking over the world.

Director Review: Gonzalo Lopez-Gallego – Gonzalo brings us a fresh feeling horror that constantly keeps you guessing to what is going on. (8/10)

Horror: Open Grave tries to keep the horror back with snippets of gore letting the thrilling side of the story come though strong. (6/10)

Mystery: Open Grave really drops us into a mystery that we have to try and work out as each secret is revealed. (9/10)

Thriller: Open Grave does keep you guessing until the final scene about what has really been happening. (9/10)

Settings: Open Grave puts our characters in an enclosed area that they are trapped in but not sure what is happening. (9/10)

Suggestion: Open Grave is one for the horror fans to watch, I think it does keep you guessing enough. (Horror Fans Watch)

Tagline: The moment you wake up, the nightmare begins

Trivia: The screenplay for this film was featured in the 2006 Blacklist; a list of the “most liked” unmade scripts of the year.

Plot: A man brutally murdered comes back to life as an undead avenger of his and his fiancée’s murder.

Story: The Crow starts on the Devil’s Night 30th October where we learn the legend of the Crow returning to avenge their death, where a young couple Eric Draven (Lee) and Shelly (Shinas) get attacked and murdered on the verge of their wedding day. Shelly’s last wish is to protect Sarah (Davis) which Sergeant Albrecht (Hudson) does his best too.

One year later Eric returns from his grave summoned by The Crow where he has t re-live the death he suffered the year before. Guided by The Crow Eric tracks down the hooligans lead by Top Dollar (Wincott) that like to go around causing damage and death without a care in the world.

The Crow brings the old school revenge film from the comic book genre and makes it slick stylish and cool. We have seen plenty of revenge films from people who have just survived an attack or lost people in an attack etc etc, but this brings our hero back from the dead. I will say the style of picking the villains off one by one is easy style to achieve without really challenging us but I also feel we didn’t need much else from the story on that front. I will always praise this film because it has that style that can’t be replicated and will always go down as a classic. (8/10)

Brandon Lee: Eric Draven is the man who gets murdered on the eve of his wedding, one year later he returns to avenge the death of him and his lover. He is now un-killable despite taking countless bullets from the enemy. Brandon gave us a great final performance before the tragic accident on the set of this very film. (8/10)

Rochelle Davis: Sarah is the young lady Eric has returned to protected, she lives on the street and was good friends with Eric and Shelly. She gets a chance to say goodbye to her old friend when he comes to her rescue putting her life back on the right path. Rochelle does a solid job in the role but doesn’t fully convince in the role. (5/10)

Ernie Hudson: Sergeant Albrecht is the cop who gets the call to the murder and once Eric returns from the dead he goes against orders to Eric complete his revenge mission while cleaning up the streets in his own way. Ernie gives a good supporting performance throughout the film. (7/10)

Michael Wincott: Top Dollar is the leader of the gang who put the hit on anyone inside the apartment, he is very spiritual and doesn’t care who he kills to get everything he believes in his to take. Michael makes for a good villain of the piece that is over the top at times but the character required it. (7/10)

Support Cast: The Crow has a supporting cast the includes the villains the Eric starts to take out one by one, they are all created to be unlikeable.

Director Review: Alex Proyas – Alex gives us a great film that will live long in the memory. (8/10)

Action: The Crow is filled with action sequences that used to kill off one of the bad guys. (8/10)

Fantasy: The Crow brings us into a world of reincarnation with Eric coming back from beyond the grave to kill his killers. (9/10)

Settings: The Crow creates a very dark setting for all the action happening showing us just how dangerous the city really is. (9/10)
Special Effects: The Crow has great special effects even if the most part is just the explosions. (7/10)

Suggestion: The Crow is one I feel everyone should have watched at least once, it really is a classic revenge film. (Watch)

Kill Of The Film: T-Bird

Chances of Sequel: Part one of 4

Overall: Classic Revenge Film that will live long in the memory.

I decided to do my review on Kingdom Hospital via Video Review, here is what I thought.

A backwoods family of hillbillies, plagued with a mysterious zombie curse, are about to become stars thanks to Barnaby Hunt, the host of Horror Hunts in this “funny take on the zombie apocalypse” (Legless Corpse).

Official Synopsis :  A disturbing mystery lurks on an old backwoods farm brought to new light when a traveling camera team arrives… seeking the one and only Hans Crippleton.
Scripted by Kevon Ward. Starring Andy Hankins, Lyle DeRose (the upcoming The Magnificent Seven) and Emma Moody.

Synopsis : Cass and Mark are a couple on a camping trip to the distant countryside. When their seemingly secluded getaway is interrupted by an ominous scream, they start to think someone might be stalking them, and encounter two strangers who are also in the woods near them. Despite everything appearing to be harmless, they can’t shake the feeling that something is wrong. The truth, however, is far more disturbing than meets the eye.

The Worst – A Good Marriage