Plot: A widower takes an offer to screen girls at a special audition, arranged for him by a friend to find him a new wife. The one he fancies is not who she appears to be after all.

Story: Audition starts Ryoko (Matsuda) in hospital dying with her husband Shigeharu (Ishibashi) and son Shigehiko at her side. Now fully grown up Shigehiko (Sawaki) wants his father to move on with his life and potentially get married again. Yasuhisa Yoshikawa (Kunimura) decides to help his friend Shigeharu by holding a show where woman of a certain age audition to be his new wife.

When Shigeharu finds the profile of Asami Yamazaki (Shiina) he believes he has found the perfect woman, having the accomplishments he desires in a woman. As Yoshikawa tries to look in Asami past he struggles to find anything but Shigeharu can’t help but remain attracted to her. We start to learn more about Asami’ past and that not everything is as it seems with her but the true identity will leave Shigeharu facing the true terror.

Audition starts with a nice style of trying to create a romantic angle which if you knew nothing about the film works very well. The problem I think this film will always have now is people knowing it has a very twisted second half and simply put it will either shock you or disappoint you. I really don’t know what happened in the final third of the film and this does work because it leaves you to figure what you want the ending to be. (8/10)

Ryo Ishibashi: Shigeharu Aoyama is the widowed man, who raised his child alone but after a few years he decides he wants to get married again. Everything is going smoothly with the beautiful but mysterious girl he meets but her secret will leave him fighting for his life. Ryo does a great job in the leading role. (8/10)

Elhi Shiina: Asami Yamazaki is the mysterious and beautiful girl Shigeharu meets and chooses for his new wife, but she isn’t everything he thinks as she has a much darker side to her history. Elhi does a great job in this role showing a full range of emotions. (8/10) 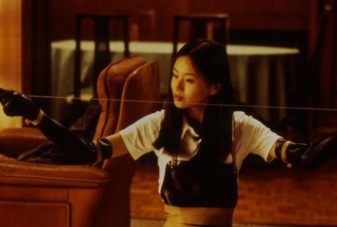 Support Cast: Audition has a small supporting cast which mostly helps the create the audition.

Director Review: Takashi Miike – Takashi brings us a film that really keeps us guessing right until the end. (8/10)

Horror: Audition has to get high praise on the horror in the final third of the film. (9/10)

Romance: Audition creates a good romantic angle for the characters and showing just how far the people would go for love. (8/10)

Thriller: Audition does keep us guessing right up to the final moments of the film. (9/10)

Settings: Audition uses the settings well to show the different society levels the two characters are leaving in. (8/10)

Suggestion: Audition is one for the hardcore horror fans to watch, if you only like certain levels of horror this will be too much for you. (Hardcore Horror Fans Only)

Worst Part: It will be too much for some.

Tagline: She always gets a part

Trivia: Described by Quentin Tarantino as a “true masterpiece if ever there was one,” in a video discussing his favourite films released between 1992 and 2009.

Overall: A film that will test how much you can watch in one showing.

Over the past year I have seen an incredible amount of films and I have decided to share with you all which ones I have seen in what order. I am going to be doing these in groups of ten, where I will pick my favourite of the bunch and the worst of the bunch. I am also offering just for fun a chance for you all to guess which actor/actress I have seen the most films off.

1. Hell is for Heroes

Residents of a coastal town learn, with deathly consequences, the secret shared by the two mysterious women who have sought shelter at a local resort. A modern Interview with a Vampire.

A group of astronaut explorers succumb one by one to a mysterious and terrifying force while collecting specimens on Mars. Poor attempt to create The Thing on Mars.

A group of teens discover secret plans of a time machine, and construct one. However, things start to get out of control. An impressive twist on time travel and found footage.

After a family tragedy, a racist prison guard reexamines his attitudes while falling in love with the African American wife of the last prisoner he executed. Powerful drama.

An exceptionally adept Florida lawyer is offered a job to work in New York City for a high-end law firm with a high-end boss – the biggest opportunity of his career to date. A thriller that really keeps us guessing.

A newlywed couple encounter the remains of an ancient curse, only to reawaken its dark legacy. I don’t want to talk about this one.

Two veteran New York City detectives work on a case of serial executions of criminals who escaped justice. Solid attempt to bring the heavyweight together.

A spy organization recruits an unrefined, but promising street kid into the agency’s ultra-competitive training program, just as a global threat emerges from a twisted tech genius. The most fun in an action film this year.

The Worst – The Devil Incarnate