Plot: A vengeful fairy is driven to curse an infant princess, only to discover that the child may be the one person who can restore peace to their troubled land.

Story: Maleficent start with narration that informs us that we have two different kingdoms that are at war who could only be separate by good guy or a villain. We meet Maleficent the good kind young fairy part of the fantasy kingdom. The young Maleficent gets to meet her first human when young Stefan enters into the world and as time goes by the two become friends and eventually fall in love.

Maleficent (Jolie) fully grown becomes the guardian of the Moors and after starting to grow apart from Stefan the war between humans and fairies was ready to come to ahead. Stefan (Copley) rising through the kingdom gets a chance to become king along with the rest of the loyal followers of the King all they had to do was bring Maleficent head to him. Stefan’s desire for power sees him betray Maleficent by taking her wings.

Maleficent fuelled by rage brings darkness to her kingdom while see waits for her chance to get revenge on King Stefan. When King Stefan has a baby Maleficent puts a curse on the baby that upon pricking her finger on a spinning wheel she will fall into sleep never to awaken until she has true loves kiss. Maleficent continues to watch Aurora (Fanning) grow hoping for the chance that when she will get cursed. As Aurora continues to grow Maleficent becomes a friend with and turns into the Godmother and even tries to lift the curse but with no luck. Aurora is doomed to need to find true loves kiss to survive.

Maleficent manages to take an old story of Sleeping Beauty and turn the story on its head, much like Oz the Great and the Power did. This time we learn that the evil from that story had a motive and wasn’t just purely evil. We learn that anyone that gets hurt in love could break and the results could turn into something that looks like this. We do get the traditional Disney ‘true love’ theme running throughout which does get used too much but on the plus side we get to see the real meaning behind it. This tries to make everything seem like it is a lot darker than the first story but in the end just sends up round in circles and coming off very been there seen that *cough* Frozen. (5/10)

Angelina Jolie: Maleficent fairy who gets betrayed by a human filling her with darkness against that human before putting a curse upon his baby daughter. Over time Maleficent becomes the fairy godmother watching over the young girl before trying to lift the curse. Angelina shines in this villain with a heart role, playing both sides throughout the film we get to see what she is capable off. (8/10) 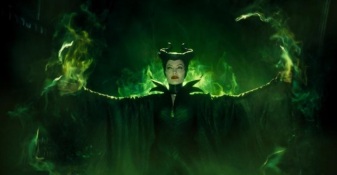 Elle Fanning: Aurora the young girl who becomes cursed, while her good nature changes Maleficent making her want to lift the curse. Elle is a great actress coming through but we don’t get to see enough of her character in this film. (6/10)

Sharlto Copley: Stefan a childhood friend of Maleficent who gets consumed by power which ends up making him betrays her on his way to become king. Once he is king Maleficent puts a curse on his baby girl which ends up pushing him into darkness trying to get revenge on her. Sharlto is a good actor normally but I do feel like he looks kind of lost in this role. (5/10) 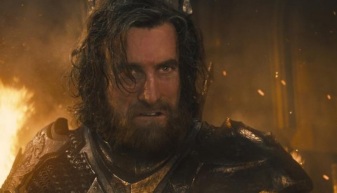 Support Cast: Maleficent has a supporting cast that includes Maleficent loyal slave and three pixies who are there for comic relief, most of the rest of the characters are there to look the part and never really get involved in what is going on.

Director Review: Robert Stromberg – Robert does a good job visual with his direction debut but really doesn’t make a true classic from which the source material could be considered. (7/10)

Action: Maleficent has a few fantasy fights but nothing over the memorable. (5/10)

Family: Maleficent is a dark tale to take the family to see and might not be suitable for the youngest family members. (5/10)

Fantasy: Maleficent takes us into a beautiful fantasy world that changes with the mood of Maleficent. (9/10)

Romance: Maleficent plays the old romance and true love storyline which feels tired through this one. (5/10)

Settings: Maleficent each setting is brilliantly created for the characters to live in. (9/10)
Special Effects: Maleficent has good effects to create the worlds. (9/10)

Suggestion: Maleficent one for the family really, and also for the Disney princess fans. (Family or Princess fans Watch)

Best Part: The Effects are brilliant.

Worst Part: Seen the story before.

Similar Too: Oz The Great and the Powerful

Oscar Chances: Nominated for One Oscar in Costume Design..

Overall: Maleficent is a fantasy film that ticks all those boxes but ends up falling short with the original story ideas.