Verdict: The Sequel We Deserved

Story: Jurassic World starts with the family including Karen (Greer) and her boys Gray (Simpkins) & Zach (Robinson) getting ready to get a Christmas present of being sent to Jurassic World to see their Aunt Claire (Howard). The part is fully operational now having hundreds of thousands of guests going through the park. Claire runs the park now and is looking to create a new dinosaur to keep her sponsors happy and increase the parks popularity.

Claire has to keep the park running leaving her an assistant to show the boys around the park, as Claire shows her owner of the park Simon Masrani (Khan) the new dinosaur that will give everyone nightmares. Simon wants to bring his man Owen (Pratt) into double check the paddock of the new dinosaur. Owen has been training raptors for Hoskins (D’Onofrio) who wants to take the raptors and use them as a weapon.

Jurassic World really comes off as a glorified petting zoo with the children getting to interact with the dinosaurs and shows being held when the dinosaurs are being feed. When Claire brings Owen gets bought into check the paddock they find out that the Indominus Rex has found a way to escape from its paddock. As our two child Gray & Zach continue their adventure around the park, while Claire tries to contain the Indominus Rex with non lethal methods. Owen demands the evacuating the island before more lives are lost but Claire tries to keep everything contained by closing just part of the island.

When the Indominus Rex it isn’t getting taken back to its cage easily and start putting every single person on the island at risk, leaving Owen to be the only one who can stop this dinosaur using his raptors as Claire gives him whatever he wants to save her nephews who become stranded in the park.

Jurassic World is going to be a long look here from me, first I will look at how the characters are involved, the kids work very well because they take us to look at dealing with divorce at a time where they could also get separated which get reflected in the story. I think the owner of the park fits in for a great replacement for Richard Hammond. Claire works as the naive business woman running the park which goes very well against Owen who never claims to be a dinosaur expert but knows more than she does. I do think we need a try dinosaur expert involved though. I also liked the villainous role which almost turns ‘Aliens’ where the villain wants to use the dinosaurs in military resources.

Now lets look at how everything unfolded, I did really enjoy the stunning looking new park and seeing how it is all fully operational. I also liked how the people running the park actually look at how people are tired of dinosaurs and the improvements made to the park improve crowds after lowering figures. The idea to mix dinosaurs works too because the original did mix the DNA of animals with dinosaurs which shows how far the ideas could leave the scientists. The film does forget the previous sequels and manages re-capture most of the magic the first one had, with the breathe taking sights when you see each part of the park. The negatives are that the final fight between the dinosaurs seems very much just there for action when we had plenty of well built up scenes before this time. I think a couple of dinosaur experts will be disappointed with certain elements involving the raptors because they seem to change a few factors about how they act. Overall I think this is the sequel we would have all liked to see but like the film states could hold it back because dinosaurs aren’t as popular now. (7/10)

Chris Pratt: Owen is the most respected ranger in the park who has been working with the raptors training them to work as a unit. He doesn’t see eye to eye with Claire as he sees the dinosaurs as animals rather than assets, but he has to work with Claire to save her nephews which gives him a chance to use his new connection with the raptors as he hunts down the rogue dinosaur. Chris brings his star power from Guardians of the Galaxy to this lead role but doesn’t reach the same level. (7/10)

Bryce Dallas Howard: Claire is the park manager whose nephews have come to the island to spend time with her, she leaves them with her assistant while dealing with matters inside the park, but when her new attraction gets lose she has to drop everything to save her nephews working with Owen the one man she doesn’t get on with on the island because he treats the dinosaurs with respect. Bryce does give us a good performance in a role we haven’t seen before. (7/10)

Vincent D’Onofrio: Hoskins is trying to get his research idea of using the dinosaur to hunt down any problems in the park, he has a plan to take over for his own personal gain. Vincent does always make a good villain but even though he characters is good he doesn’t get enough screen time. (7/10)

Ty Simpkins: Gray is the younger of the two nephews, he loves his dinosaurs but is smart enough to know the reality of what is happening in his family life. He has to work with his brother to survive when they both become trapped in the park. Ty does a good job and continue his young career in big Hollywood films. (7/10)

Irrfan Khan: Simon is the owner of the park and believes in the same principles that Richard Hammond did, money isn’t an issue the entertainment of the guest is what is important. I did like this character because for the first time the owner takes responsibility for his mistakes and tries to correct them. Irrfan gives this film a good performance which works for the film. (7/10)

Nick Robinson: Zach is the old brother of Gray who has to look after his brother in the park while on the trip. He doesn’t want to be on the trip because his interest are elsewhere but now he gets one last bonding trips with his brother before he goes onto college. Nick does a good job in the role. (7/10) 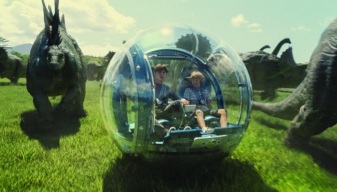 Support Cast: Jurassic World has a generic supporting cast but I have to say Jake Johnson really shines in the control centre making the points very well.

Director Review: Colin Trevorrow – Colin brings us the fan demanded sequel that really works well, it pays a lot of respect towards the very original, he shows the story telling ability and even holds back the action because it doesn’t need to be all out. (8/10)

Action: Jurassic World holds back on the full action sequences until the end where it lets everything go. (7/10)

Sci-Fi: Jurassic World adds to the ideas used with future technology put into the dinosaur idea that all work very well for the story to unfold. (8/10)

Thriller: Jurassic World does keep us wanting to see what happens to our characters from the moment the dinosaur escapes. (8/10)

Settings: Jurassic World brings us back to the original island and everything look absolutely stunning. (9/10)
Special Effects: Jurassic World uses brilliant effects throughout to bring all the dinosaurs back to life. (10/10)

Suggestion: Jurassic World is one for the fans of the original who might not have liked the sequels, this brings us back to where we should have been going after the first one. (Watch)

Action Scene Of The Film: The final fight does look great though.

Kill Of The Film: Zara

Favourite Quote: Owen ‘You just went and made a new dinosaur? Probably not a good idea ’

Chances of Sequel: It will have one.

Oscar Chances: Could have technical awards

Tagline: The park is open.

Trivia: According to director Colin Trevorrow, the film is a direct sequel to the original film, with the sequels being “placed to the side”.

Overall: A Great sequel that could easily be worse but comes off very nice