San Andreas looks like it will be the biggest disaster film of the year, so I decided to look at my favourite natural disaster films. I decided to leave out 2012 because it goes too far for me into the mental adventure film but I really do enjoy it all. Nearly all my films have come from between a 6 years period too.

When the Earth is starting to stop rotating we follow a group of scientist who have to travel into the Earth to restart the rotation before time runs out. We have an all-star cast of Aaron Eckhart, Hillary Swank and Stanley Tucci too. 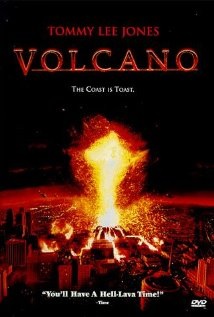 I do feel like Volcano is the least popular on the list here but after a while it does become very interesting the more you watch it. I feel this one is arguable the most sudden because it feels like a normal day and we actually have to see normal people deal with the situation.  This film also has big names involved with the legendary Tommy Lee Jones, Don Cheadle and Anne Heche.

The dreaded climate change has happened bring around a new ice age that will make the North Hemisphere going to be have mega numbers of casualties. This wasn’t one of my favourites first time around but now I do enjoy watching it. The film also has big names in with Jake Gyllenhaal and Dennis Quaid.

Yes, another volcano based film here this time a small town in the shadow of a dormant volcano faces the reality that the volcano is about to erupt cause their peaceful lives to change forever. I have picked this one because of the survival side of the story and it is James Bond versus the Volcano. Two more big names here Pierce Brosnan and Linda Hamilton.

Armageddon will always go down as one of my all-time favourite films because the pure emotion thrown into the tragic disaster stories. We have brilliant action scenes, over the top action and comic moments throughout. It also has the odd couple feeling with the idea that one team is just oil drillers and the other is actually astronauts.