Verdict: Creature Feature Before it was Mega

Story: Lake Placid starts with a scientist tagging beavers with Sheriff Keough (Gleeson) looking after the boat, but something attacks the scientist leaving the Sheriff to pull out half his body. Move to the city where we meet Kelly Scott (Fonda) palaeontologist. Next back to Lake Placid and Jack Wells (Pullman) from Fish and Game has turned up to investigate the body and what could have attack the man. Kelly is sent to Placid to look at a strange tooth that is found on the body only to discover it is from a living reptile.

Hank, Jack and Kelly have to put aside their differences and work together to figure out what is in the lake and what could potential do the damage to actually rip a man in half. When Hector Cyr (Platt) arrives believing they are after a crocodile. Finding remains of the first victim they discover they are in fact after a crocodile so they prepare to capture it.

The four still struggling to get along they finally get to see how big the crocodile actually is when it takes down a grizzly bear. They have to decide whether to catch or kill the crocodile and after they decide to try and catch it we are left to see if it was the right decision. 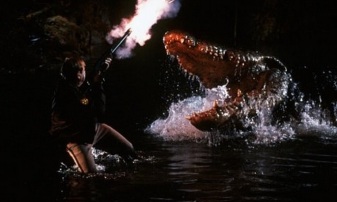 Lake Placid is a film that is almost before its time, I say that because we look at what is getting made on a regular basis now (Mega Shark, Giant Octopus, Sharkzilla the list goes on) this was how to make one with a little bit of money and practicial effects. I am not saying this was brilliant but most importantly it was fun and made for a good horror comedy. I like the idea of four main characters and seeing them not get along as well as having that feeling that one might get eaten throughout the film. On the negative side we don’t get a real body count which takes away certain aspects of the horror side of the film. I personally found this fun and easily re-watchable just don’t watch it with your serious head on. (7/10)

Bill Pullman: Jack Wells man from Fish & Game who is in charge of the investigation and has the final say on any of the ideas going on. Jack constantly takes charge and flirts between being a good guy and bad guy with his choice even though we know he is making the right ones each time. Bill gives a solid performance but doesn’t reach the levels we know he can. (6/10) 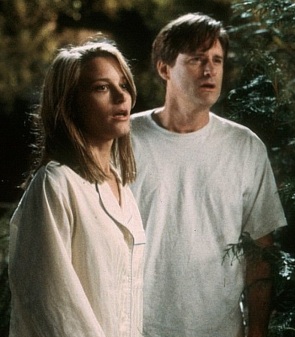 Bridget Fonda: Kelly Scott palaeontologist who is sent from New York to identify what cause an animal attack and ends up staying to help catch the creature even though she spends more time falling out boats or cars. Bridget does a good job as the constant damsel in distress. (6/10)

Oliver Platt: Hector Cyr the crocodile expert who wants to try and catch this creature and his constant trap setting makes for extra laughs because the friction between Hector and Hank is very funny. Oliver does a good job and shows off a good comic side here. (7/10)

Brendan Gleeson: Sheriff Hank Keough is from the school of seeing is believing and doesn’t believe there is a crocodile until he sees one. He wants to keep the people safe at all costs. Brendan does a good job in this role that has good comic side to it. (7/10)

Support Cast: Lake Placid has a support cast that in different levels of authority who help out, an old lady who has been feeding the crocodile and the people who sent Kelly along. They all help for a bit of extra comedy.

Director Review: Steve Miner – Steve does a good job directing and we know we can trust him with this genre of film. (7/10)

Horror: Lake Placid doesn’t reach many horror levels but also doesn’t try too hard to be one. (5/10)

Settings: Lake Placid has a beautiful showing how a paradise can turn into something terrible. (8/10)
Special Effects: Lake Placid uses very good practical effects for the crocodile making it feel more like a real attack. (8/10)

Best Part: Crocodile and the bear.

Funniest Scene: Hank falls for another one of Hectors traps. 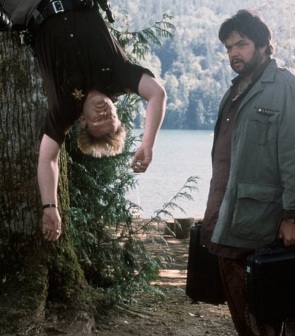 Kill Of The Film: Deputy on the boat.

Overall: Lake Placid is a fun film that really hasn’t dated over 15 years, but really could have been the top dog on the world we are in now with all these creature feature like films.