Plot: A documentary exploring genre based monster art takes an odd turn when the filmmakers are contacted by a man who claims he can prove that monsters are indeed real.

Story: Digging Up the Marrow starts by interviewing a string of stars/artists/film makers and other people involved in entertainment about monsters and what drove them to enter the form of work they are in now. We meet horror director Adam Green (Playing himself) and his cinematography Will Barratt (Also playing himself). The two are making a documentary about the success and the connection to the fans. One fan Detective William Dekker (Wise) who claims there are real monsters and on the third interview they decide to film his story. Dekker believes there is a place called The Marrow just under our own Earth surface where these ‘freaks’ of the world live without us knowing about them.

Adam, Will and William look plan to spend a night looking for the monsters, the rules are simple follow Dekker’s rules and we learn that this monster investigation is an obsession for Dekker even if Adam is taking it lightly. The first night the crew struggle with lighting because using the camera light would expose them watching the monsters.

When Adam tries to push the limits of the rules but goes too far but captures one of the monsters on camera. Taking the footage back to Editor Jason Either (Playing himself) and monster movie legend Kane Hodder (Playing himself) who believe everything to be a hoax of sort. Two weeks later Will and Adam return and along with Dekker try to think of an idea to be able to film the monsters by creating light source that looks natural. The new idea is a success as the cameras capture a new monster, but the project has to go on hold so Adam goes on tour to the horror conventions.

During the month away Adam learns that Dekker has been reaching out to bigger horror directors to tell his story, in another turn of events Dekker has been visiting the Marrow entrance and acting strangely making Adam question Dekker’s sanity. Determined to get to the bottom of the story Adam and Will decide investigate the Marrow entrance without Dekker to see if the story is true without Dekker being able to put anything on, before learning the truth.

Digging Up the Marrow puts together the idea of what found footage films have been failing with, but without being fully designed as a found footage film. It uses the real director to give the film a true documentary feel but also uses the camera being what we see. Mixing the group together we get to see a very effective horror film that does have a few shocks, it almost pokes fun at all the paranormal investigation type shows without being a flat out comedy and tries to break the fourth wall on many occasions. I personally really liked this idea and simple put this is an effective horror because when the scares happen they are effective. (8/10)

Ray Wise: William Dekker the man who believes that there are monsters just under the surface of the Earth and has reached out horror directors to help tell his story. Ray gives a good performance as the potential crazy man who could have a true story to tell. (9/10) 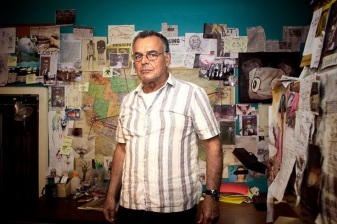 Adam Green: Adam plays himself as the horror director who has been given the story and investigates the story Dekker has given him. Adam ends given a natural performance that shows how Adam wants to find and understand real monsters. (8/10)

Will Barratt: Will plays himself and is the man behind the camera through the most part of the film, he is Adam’s friend and along the way he offers the idea to bounce potential theories between the two. Will spends most behind the camera so it is hard to rate highly but does help give the role a natural feel. (7/10)

Support Cast: Digging Up the Marrow has a supporting cast that is names in horror world that are mainly only used for interviews and learning about what could be real or effects.

Director Review: Adam Green – Adam does a great job directing this making us feel like it could be a real documentary that is filled with horror. (8/10)

Documentary: Digging Up the Marrow uses the documentary idea by giving the film a full mockumentary idea. (9/10)

Fantasy: Digging Up the Marrow takes us into a fantasy world of what could be under the surface of the Earth. (9/10)

Horror: Digging Up the Marrow lets the horror build up and when we get the scares they are effective. (9/10)

Mystery: Digging Up the Marrow offers up the mystery of what could be real throughout. (8/10)

Thriller: Digging Up the Marrow does keep you guessing to what will happen next and you really don’t know what monster will turn up next. (9/10)

Suggestion: Digging Up the Marrow is one that horror fans should be watching as it will be one of the better ones this year. (Horror Fans Watch)

Worst Part: It does have a slightly slow moving start.

Similar Too: The Buried Secret of M Night Shyamalan

Tagline: You will believe.

Overall: When it comes to horror films we have seen plenty of different types but a mockumentary style works in this new way that has good scares throughout.