Plot: Two young girls, Satsuki and her younger sister Mei, move into a house in the country with their father to be closer to their hospitalized mother. Satsuki and Mei discover that the nearby forest is inhabited by magical creatures called Totoros. They soon befriend these Totoros, and have several magical adventures.

Story: I have only heard good things about this one but of all the Ghibili films I have seen I found this the most boring. It has some pretty fantasy elements and does deal with a serious real life issue through a child’s eyes. My biggest dislikes about this film is that is starts very slow and both children are just very loud and annoying. If you were to show this to the children they would enjoy it has it plays into everything they would enjoy. (7/10)

Satsuki: The older sister who looks after Mei while dealing with a very real downside that their mother could be dying leaving him. She is very loud and easily over excitable. (7/10)

Mei Kusakabe: The younger of the two sisters who makes the first contact with the Totoro’s. Much like her sister she is very loud but also not sure what is happening with the situation with their mother. (7/10) 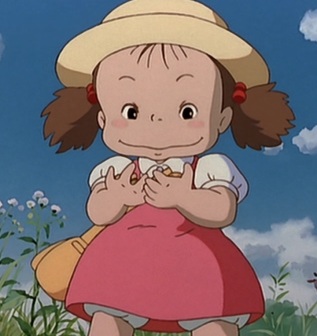 Totoro: Giant creature who lives in the forest who visits the residents when he choices. What looks like a creature that could scary is actually just a giant friendly teddy bear creature. (7/10)

Animation: As always this is top animation work. (9/10)

Family: One for the young audience members to enjoy with their family. (7/10)

Fantasy: The Totoro’s are great creation to be created in the fantasy side of the world. (8/10)

Suggestion: Show this to your kids they will enjoy it, but not really for the adult audience. (Show the Kids)