Plot: Pair of underachieving cops are sent back to a local high school to blend in and bring down a synthetic drug ring.

Story: We start by following our two very different high school students failing at something different things. We fast forward seven years to the police academy where the two become friends to help each other overcome their problems and get through. After they get through the two get partnered up but continue to fail leading them to get transferred to ’21 Jump Street’ program. They have to go undercover as high school students. They have to uncover a drug ring at the high school and get over the problems they faced before.

When it comes to buddy films cop we all know the basic formula and to be fair this follows everything together to keep the action and comedy blend flowing. It is good to see the mix with the high school film working as well as the idea of giving the two a chance to see how the other get through high school. Having never seen the original show I can’t say whether it is honest to the source material but in the end it really turns into a good action comedy in a world where the comedy films are starting to fall flat. (8/10)

Jonah Hill: Schmidt the high school geek who can get through all the paperwork side of the police work but lacks the physical presence Jenko has. Going undercover gives him a chance to experience the high school experiences he missed out. Jonah gives a good performance as we know he can play the teen comedy but also shows he ability to bounce of somebody else’s strengths. (8/10) 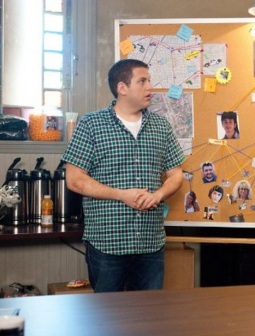 Channing Tatum: Jenko after only just getting out of high school and being told he has no intelligence for a future he ends up joining the police force and until he teams up with Schmidt to help him with get through the academy. While undercover he ends up having to experience the geek in high school. Channing gives a good performance and shows that he can pull off comedy to go with his all action persona. (8/10)

Brie Larson: Molly high school student who Schmidt takes a shine to who ends up leading him to push aside his responsibilities as the cop. Brie gives a solid performance in the supporting role. (7/10)

Dave Franco: Eric the drug dealer at the school who befriends Schmidt while the two try different ways to find out who the supplier is. Dave gives a solid performance as the teenage drug dealer trying to stay cool. (7/10)

Support Cast: The drug dealers, other police officers, Schmidt’s parents and high school attendants all make up the support cast and all offer something for our main characters to work with to progress the story.

Action: With car chases being the main source of action they all come off very well with hints of comedy during without just being silly action. (8/10)

Comedy: The most part the comedy is all very good, but I did feel the over use of the sex jokes got boring. (8/10)

Chemistry: Hill and Tatum have brilliant chemistry together. (10/10)

Settings: The high school setting works really well for the story as we haven’t seen the undercover there before. (9/10)

Suggestion: It isn’t very often that I suggest a box office comedy but with this one I feel people should be watching. (Watch)

Action Scene Of The Film: Car and Motorbike chase

Chances of Sequel: Has one sequel and has talks of a third.

Tagline: They’re too old for this shift

Plot – Wanted by the mafia, a new York City bike messenger escapes into the world of parkour after meeting a beautiful stranger.

Highlight of the Trailer: The Parkour

What Looks Good? The parkour looks good and it looks good for the all round action.

What Looks Bad? Well I don’t expect too much from the acting.

Summary: With the beginning of this trailer looking like Premium Rush I believe this could easily be on that level of entertainment, switch you brain off and just enjoy the show.