Plot: A group of five college graduates rent a cabin in the woods and begin to fall victim to a horrifying flesh-eating virus, which attracts the unwanted attention of the homicidal locals.

Story: Starting with horrific discovery by a hermit we jump straight to our five college friends as they head off for a celebration in a cabin in the woods. We follow how the group do their things and enjoy their week away as we get a few surprises from the now sick hermit. After the hermit returns with the infection growing the group of friends become trapped and as the holiday continues they start to notice changes. As the basic cabin fever starts to take over the friendships are tested as the infection starts to take over the friends don’t have much time left.

What we have here is what could happen if there was a virus outbreak and how it could be spread so very easily. It is also very good to see how it only follows the first few days of the outbreak showing the true horror of not knowing what is happening. Sure the characters all show very different reactions and all end up going through quite horrific experiences. This really was a shock horror for its time of release and showed that with a small budget you could create a very scary situation that could also become a very real event. (8/10)

Rider Strong: Paul the good guy who just wants to weekend away to confess his love for Karen, he plays the voice of reason between the friends as the arguments start to take over. Rider does a good job in a performance that was trying to redefine his career. (7/10)

Jordan Ladd: Karen the girl in question that Paul wants to confess his love to an old friend but when she gets the infection first she is the first to be isolated. Jordan gives a solid performance as she has to go through the most. (7/10)

James DeBello: Bert solo guy of the group who just likes to party more than the rest, he occupies himself but in the end bring the infection to the group after clashing with the hermit. James gives a solid performance and plays his role to the standard required. (6/10)

Cerina Vincent: Marcy part of the only couple on the trip who enjoys to party, but when her boyfriend Jeff leaves the friends over fear of the infection she acts like there is no chance of survival. Cerina gives a solid performance which includes a chilling shaving scene. (7/10) 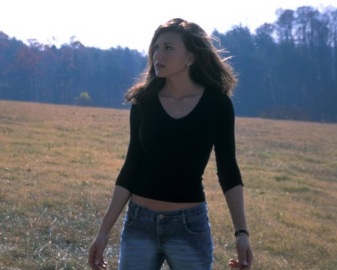 Joey Kern: Jeff boyfriend of Marcy who goes off alone because he fears for his own safety showing very little loyalty to his friends. Joey gives a solid performance but isn’t really involved in much of the actual terror side of the story. (5/10)

Support Cast: Comprising of the locals trying to keep themselves safe the supporting cast does what it needs to, to keep the story rolling.

Director Review: Eli Roth – Great direction from Eli showing that he was going to go onto bigger and better things with his unique take on horror. (8/10)

Horror: Once the infection starts to hit our heroes it because a very real horror. (8/10)

Settings: Even though the cabin is along the lines of isolation, the film creates more isolation from the locals not helping the five friends. (7/10)
Special Effects: Great Practical effects used throughout to create the effects of the virus. (10/10)

Suggestion: This is one for all the horror fans to watch, it has plenty of blood and gore. (Horror Fans Watch)

Believability: Even though it seems very much over the top the idea of a virus spreading the way it does could very much be a reality. (5/10)

Chances of Sequel: Has two sequels and has talks for another one.

Tagline: Terror… In the flesh.

Trivia: While filming a particularly bloody scene, Rider Strong decided to go for a walk in the woods between setups. Covered head to toe in blood, he happened upon a group of 35 schoolgirls, who were on a field trip. The girls screamed at the sight of this blood-drenched hiker, and then screamed even louder when they realized the hiker was the star of Boy Meets World (1993). The girls chased Rider through the woods. Strong eventually made it back to the film crew, and vowed never to wander off between scenes again.

Overall: Let The Blood Flow As The Infection Spreads