Plot: The Brothers Grimm Wilhelm (Damon), Jacob (Ledger) go round from town to town taking advantage of the suppositious locals and their myths and fairy tales. While Cavaldi (Stormare) is determined to expose the truth about the legend and General Delatombe (Pryce) sends the Brothers to a small village to uncover the truth behind a mysterious number of disappearances of the children of the village.

When the Brothers arrive in the village they are treated rather unwelcomely and have to join forces with local hunter Angelika (Headey). After they discover that the mystery is real they must learn to accept that they will need to fight a real supernatural being to save the village and their reputations.

Story: When you hear the name Brothers Grimm you know you are going to have a twisted fairy tale, this follows that have plenty of references to this fairy tales. We get to see how pretenders become heroes after going up against their own fears. I feel it could have been more twisted for what the subject idea is but it works well for gentle fun. (7/10)

Matt Damon: Wilhelm Grimm the showman of the brothers who always seems to be out for himself and holding Jacob’s mistake against him. Good performance from Damon who shows he has comedy skills. (8/10)

Heath Ledger: Jacob Grimm the smarter of the two brothers who is also more accepting of the idea of supernatural. Good performance from Heath showing that he really could do just about any role. (8/10) 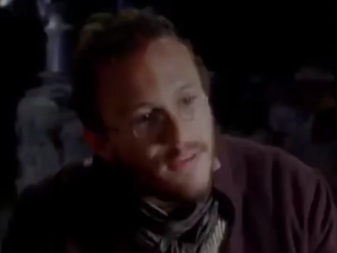 Peter Stormare: Cavaldi a man hunting down the brothers and their hoaxing but ends up having to work with them to solve the case of the missing children. Solid from Peter showing he makes a great supporting star. (8/10)

Jonathan Pryce: Delatombe a general trying to rid the country of the Brothers and their tricks. Good supporting performance filled with plenty of eccentricity. (7/10)

Lena Headey: Angelika a local hunter who is believed to be cursed because he sisters were the first to go missing. Good supporting role that also ends up becoming a love interest for the brothers. (7/10)

Director Review: Terry Gilliam – For what we are wanted to expected from Terry this one comes off a bit tame for him even though it is very entertaining. (7/10)

Comedy: A few laughs but that just eases the serious side of the story. (6/10)

Settings: Good authentic settings used, and the creepy woods add to the atmosphere. (9/10)
Special Effects: Solid special effects but the CGI is clear to see. (7/10)

Suggestion: This is only to try, if you want to see the stars in different roles than you are used it works well, but its more something we have seen before. (Try It)

Scariest Scene: The mud monster from the well.

Believability: All fairy tales come from stories this could be true but this story goes a bit far. (2/10)

Chances of Sequel: It is left open for a sequel, but it is unlikely.

Tagline: This isn’t the way to Grandmother’s house.

Trivia:Damon and Ledger were cast in each other roles but petitions to swap.