Plot: An undercover Detroit cop navigates a dangerous neighborhood that’s surrounded by a containment wall with the help of an ex-con in order to bring down a crime lord and his plot to devastate the entire city.

Story: Looking into the story we get one man who is upsetting the leader of Brick Mansions, while he is trying to achieve something good by cleaning up the neighbourhood. He ends up teaming up with a cop who is making a name for himself in the undercover narcotic world. When Tremaine gets his hands on a bomb that could destroy the more open society the two men have to team up to retrieve it before it blows. It is a pretty simple film to watch the story never tests you but it does have a few twists you might not see coming. It relies more on it’s action to carry it through. (6/10)

Paul Walker: Damien Collier an undercover narcotic cop who has been holding a grudge against Tremaine after killing his father. Paul gets to show off his driving skills along with his parkour skills as well as offering a few comical lines when the parkour is too much compared Lino. With this being Walker last complete role he gives a solid performance that you would expect from him. (8/10)

David Belle: Lino ex-con who is trying to clean up the neighbourhood by going toe to toe with Tremaine. He possesses breath taking parkour skills that will pull you to the edge of your seat throughout, but his acting leaves a few questions. It would be fair to say this was designed to show off his parkour skills rather than acting skills. (6/10)

RZA: Tremaine Alexander leader inside Brick Mansions who has been ruling with an iron fist, fuelling everyone’s drug habits. I do think he started off being a very good villainous character but I also feel that the character changed too much and ruined the ending but that can’t take away from the performance from RZA. (6/10) 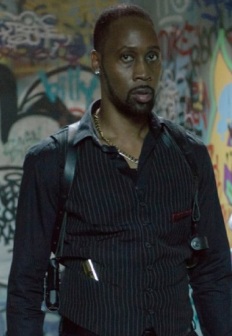 Gouchy Boy: K2 the traditional lead henchman who is actually pretty much useless and blames everyone for his short comings. Good for comic relief but really doesn’t add anything to the story. (5/10)

Catalina Denis: Lola the kidnapped girlfriend of Lino who is pretty much the damsel in distress from the moment we meet her to the final act. Does ok with what little she has to do. (5/10)

Ayisha Issa: Rayzah the crazy henchwoman for Tremaine who gets to ‘play’ with Lola as well as guard her from any attempt from Lino to save her. An entertaining support villain. (6/10)

Director Review: Camille Delamarre – The direction for the fighting all works out nicely it is the story that lets this film down with its sudden change. (6/10)

Action: Plenty of fights, parkour chases and a few car chases, all will keep the action fans happy. (9/10)

Thriller: On paper the bomb waiting to go off does make for a thrilling side to the story, but in the end it doesn’t quite pull you in as much as it should. (5/10)

Settings: The settings get used perfectly for all the parkour and fight scenes. (9/10)

Suggestion: I do think the action fans will enjoy this one, the action should keep them happy but the casual fans might not enjoy this. (Action Fans Watch)

Funniest Scene: The way the residents have Lino come through a window and react ‘hi Lino’

Two hopeful new arrivals at The Best Exotic Marigold Hotel for the Elderly and Beautiful quickly learn that there is only a single room left to rent.

The sequel to the delightful comedy.

Will it live up to the first one?

Will it be as popular as the first surprise hit?