Plot: Scooby and the gang take a mystery-themed cruise through the Bermuda Triangle, but what starts out as staged hi-jinks soon turns into the real thing. Ghost pirates are prowling the legendary waters of the Triangle, searching for a priceless treasure and someone on board the cruise ship may hold the secret to it’s location. Now Scooby and the rest of gang will have to solve the real mystery behind the mysterious treasure or they may end up walking the plank to sink to the depths of Davy Jones’ Locker!

Story: We only watch these films to see where the gang end up, as they always end up in a position where there is a mystery to solve. Putting the gang on a mystery cruise only for them to ruin the trip for everyone before the real mystery begins. The case is always larger than the TV series mysteries and usually has a few more twists and turns. It really does what it needs to do and will keep the fans entertained. (7/10)

Scooby Doo: The most famous Great Dane gets up to his usual here, with his stomach taking over, but unlike other films he knows when things get personal he will step up instead of waiting for a Scooby Snack. (7/10) 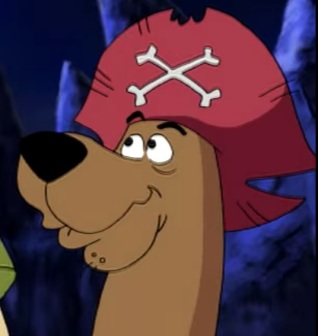 Fred: With his parents inviting the gang on the cruise, he gets all embarrassed by them, but his plan as always goes slightly wrong before he takes full control to save his parents. (7/10)

Shaggy: Typical Shaggy performance whose stomach always comes first, but his nose helps the gang get to safety when the gang is in danger. (7/10)

Velma: The brains of the gang who puts together the mystery and as always she knows who did it. (7/10)

Daphne: Always comes over as a bit of a diva but always ends up being a lot smarter than she is given credit for, she uses her resources to get the gang free.(7/10)

Captain Skunkbeard: The captain who is after a buried treasure in the Bermuda Triangle, he is capturing any ship that comes close and building an army of ghost pirates. (7/10)

Rupert Garcia: The man that Captain Skunkbeard is after as he has the answer to where the treasure is. (7/10)

Director Review: Chuck Sheetz – Good direction to create everything you want in a Scooby Doo film. (7/10)

Animation: Good animation showing you don’t need all the best animation for a good film. (7/10)

Comedy: Normal level of comedy for a Scooby film that gives enough laughs without it being a full blown comedy. (7/10)

Mystery: Always good for a ‘who done it’ without being too confusing. (8/10)

Settings: Good setting using the Bermuda Triangle and its history to add to the mystery. (9/10)

Suggestion: These films will always be good for the family to watch as they have enough entertainment to keep everyone happy. (Kids And Family Watch)

Chances of Sequel: This is a franchise that will go on and on.