Plot: When the ability to travel through time is perfected, a new type of law enforcement agency is formed. It’s called Time Enforcement Commission or TEC. A cop, Max Walker, is assigned to the group. On the day he was chosen, some men attack him and kill his wife. Ten years later Max is still grieving but has become a good agent for the TEC. He tracks down a former co-worker who went into the past to make money. Max brings him back for sentencing but not after telling Max that Senator McComb, the man in charge of TEC, sent him. Max has his eye on McComb.

Story: With the 90s having some of the best action films of all time, it would take something outside the box to make a difference. We get the awkward accent put into a time travel position to save the world, sure there are a couple of films that have used time travel but usually only one way, this will test you time travel theory ideas. Trying to throw a few twists that do work but to the level of certain films and they will not offer any real surprise factors as you will be waiting for one to happen. Realistically you don’t need a story that is that deep for this film as the action lets the story unfold. (8/10)

Jean-Claude Van Damme: Walker the TEC officer who wants to uncover the truth but a chance comes his way to change a moment in his history that haunts him every day. JCVD is all action and bad one liners and this is what you expect to see from him.  (8/10) 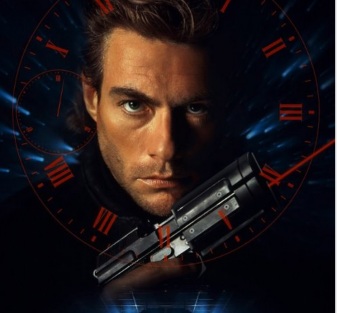 Ron Silver: McComb the senator using the power of time travel to fund his presidential campaign. Good business man villain using his brain and henchman over his own combat. (7/10)

Bruce McGill: Matuzak the leader of the TEC unit that backs Walker on everything he says but as the future keeps changing the feelings between the two keep changing. Good support performance offering a few chuckles with the banter between the two. (7/10)

Director Review: Peter Hyams – Good direction to create an action film that still gets talked about today over 20 years later. (8/10)

Action: Plenty of action be it fights or gun battles. (9/10)

Sci-Fi: Good use of the sci-fi genre without being widely over the top. (9/10)

Settings: Each setting works for the story with the family home being important for most of the action. (7/10)
Special Effects: With the new technology the special effects have started to date but in the most part still look pretty good. (7/10)

Suggestion: This is one for the action fans out there; it will be enjoyed by all of them and could be enjoyed by the casual fans. (Action Fans Watch)

Chances of Sequel: Has one

Tagline: They killed his wife ten years ago. There’s still time to save her. Murder is forever…. Until now.

Following a couple of investigators who go in search of the mythical Beast of Exmoor but as their hunt goes on they find themselves in more trouble that they could every imagine.

Will it be about the monster or a man who is twisted?

Including the mythical character works on selling a film but sometimes it fails to live up to hype will this?