What If – Medical school dropout Wallace has been repeatedly burned by bad relationships. He meets Chantry, an animator who lives with her longtime boyfriend Ben, and they form an instant connection, striking up a close friendship. Still, there is no denying the chemistry between them, leading the pair to wonder, what if the love of your life is actually your best friend?

Lucy – A woman, accidentally caught in a dark deal, turns the tables on her captors and transforms into a merciless warrior evolved beyond human logic.

Deliver us From Evil – NY police officer Ralph Sarchie (Eric Bana), investigates a series of crimes. He joins forces with an unconventional priest (Edgar Ramirez), schooled in the rituals of exorcism, to combat the possessions that are terrorizing their city. 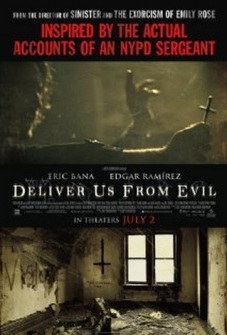 Into the Storm – A group of high school students document the events and aftermath of a devastating tornado.

Newguy’s Pick of the Week – What If

Plot: In order to avoid a ghostly figure in the road, high school senior Brent Mitchell wraps his car around a tree, killing his father. Constantly confronted by his mother’s emotional collapse after the accident, Brent escapes into a marijuana fueled world of loud metal music to block the pain and guilt. Dejected and out of sorts, he has a shot at happiness with his girlfriend Holly, a grounded, caring girl with drop dead good looks, a dream date for the high school prom. But his plans are thwarted by a disturbing series of events that take place under a mirrored disco ball, involving pink satin, glitter, syringes, nails, power drills and a secret admirer. Brent has become the prom king at a macabre, sadistic event where he is the entertainment.

Story: The whole torture horror has been done plenty of times, but this one offers a fresh motive behind the action. We get the jilted teenage girl who makes every guy who rejects her pay with her father. We also have a second story going showing how two friends’ prom nights go very differently and how loved ones are worrying about their missing loved ones. Where the captured scenes are not the most original we do get to see a few twists and turns behind the motives and long term plan for the victim. In the end this is a twisted tale that is very much over the top that could get a few laughs if you watch it correctly. (7/10)

Xavier Samuel: Brent the depressed young man who lives with the nightmare that his accident killed his father, but when prom night comes he gets kidnapped and put through a torturous ordeal from a deranged family. Good victim performance but doesn’t need to do much. (6/10)

Robin McLeavy: Lola the twisted girl who has history of kidnapping young men, torturing them before disposing of them, she really is jilted in her quest for a perfect night and prince charming. Good performance playing the twisted girl whose mood can change in a blink of an eye. (8/10)

Director Review: Sean Byrne – Creates a good horror thriller that offers a fresh story if not the action. (7/10)

Horror: With the clever camera work so we only see the reaction to the torture rather than being forced to watch it. (7/10)

Thriller: You do get dragged in and you just want to know how far this family will go. (7/10)

Settings: The settings work well, with the prom having everyone busy the victims get isolation to do what they want. (8/10)
Special Effects: Good special effects to create good real looking after effects of the torture. (8/10)

Suggestion: This is one for all those horror fans out there, and as I have become a fan of Australian horror this really does come off well. (Horror Fans)

Worst Part: The side story can look like filler.

Tagline: You don’t have to die to go to hell.

Film archivist David (Rupert Evans) has been having a rough time lately, as he suspects that his wife Alice (Hannah Hoekstra) has been cheating on him with Alex (Carl Shaaban), one of her work clients. This stress is compounded when David’s work partner Claire (Antonia Campbell-Hughes) gives him a reel of to-be-archived footage that shows that his house was the setting for a brutal murder in 1902. Becoming progressively more unsettled and unhinged, David begins to believe that a spectral presence is in his house and ends up following his wife to a nearby canal, where he discovers that she is indeed having an affair with Alex. When Alice goes missing shortly afterwards, David contacts the police- only to become the prime suspect in her disappearance. As the police grow more convinced that David has murdered his wife, he struggles to find proof of his growing suspicion that something otherworldly was instead responsible.

Release Date: Not Set in UK

Ghost story that could deliver?

Do you think it will be scarier?

Will it just be a investigating a supernatural case?