Godzilla – The world’s most famous monster is pitted against malevolent creatures who bolstered by humanity’s scientific arrogance, threaten out very existence.

Enemy – A man seeks out his exact look-alike after spotting him in a movie.

In Secret – Set in the lower echelons of 1860s Paris, Therese Raquin, a sexually repressed beautiful young woman, is trapped into a loveless marriage to her sickly cousin, Camille, by her domineering aunt Madame Raquin. Therese spends her days confined behind the counter of a small shop and her evenings watching Madame play dominoes with an eclectic group. After she meets her husband’s alluring friend, Laurent, she embarks on an illicity affair that leads to tragic consequences.

Two Faces Of January – A thriller centred on a con artist, his wife and a stranger, who try to flee a foreign country after one of them is caught up in the murder of a police officer. 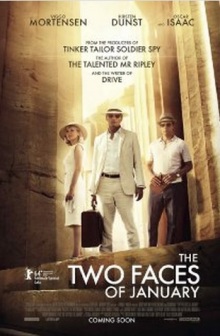