Plot: Welcome to Charlestown a place with the highest number of bank robberies in the world. Robbers Doug (Affleck), James (Renner), Albert (Slaine) and Desmond (Burke) do a job which runs smoothly but when James takes it into his own hands he takes a hostage Claire (Hall). After discovering she lives in the town things start to get complicated. FBI S.A. Adam Frawley (Hamm) is in hot pursuit on the robbers as well as Doug having to split in Fergie (Postlethwaite) the local crime lord. 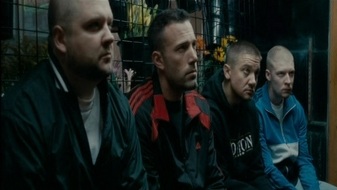 Doug trying to make up for her kidnapping strikes up an unusually relationship with Claire, which could end up causing him and his team problems if they want to go onto any new jobs. Doug trying to get out of the business and town agrees to one more job, but Fergie won’t let him walk away until the job is done and the trigger happy James could stop his plans to escape the life of crime.

Story: A lot of films that are based on similar content are only about the cat and mouse chase between the good guy leader of the crimes and the determined authority figure chasing him down. This part is similar the leader of the crime unit will follow rules and won’t let people get hurt but has to deal with a hot head who will. Adding the romantic relationship between a victim and criminal works to its advantage showing how he really is stuck in a situation because of the neighbourhood. This is a very interesting story that does follow traditional themes but comes off very well. (9/10)

Ben Affleck: Doug the leader of the criminal unit that ends up in a relationship that could end his criminal career as well as putting his life and friends lives at risk. Good performance from Affleck who managed both leading and directing the film. (9/10)

Rebecca Hall: Claire the bank manager who ends up being taken hostage and while dealing with what happened meets Doug who keeps a few secrets about how they really met. Good performance from Rebecca in what is a growing reputation in Hollywood. (8/10)

Jon Hamm: FBI S.A. Adam Frawley who is on the case trying to find out who is reasonable for the robbery and once he sniffs a bone he just won’t let up. Good performance playing the determined authority very well. (8/10) 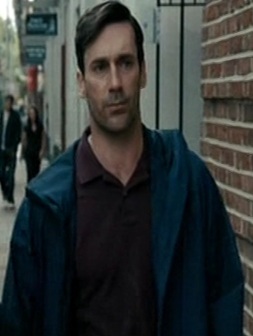 Jeremy Renner: James Doug’s old friend who is more tripper happy than Doug which is what causes everything to start going wrong for the team, but he goes out the way he wanted too. Oscar nominated performance here; Jeremy is solid and perfectly reflecting difference to Doug. (9/10)

Director Review: Ben Affleck – Great direction showing that Ben’s future is behind the camera, this was his second feature film direction and it shows how he has grown and learnt. This led to his Oscar winning film Argo. (9/10)

Crime: The organised crime all feels authentic and the authority works to make everything piece together. (9/10)

Drama: Solid drama that gives each character a chance to develop as the story unfolds. (9/10)

Thriller: With the heists going on you really get into them wanting to know who will make it out. (9/10)

Settings: set in Charlestown makes everything have a very touching unity. (9/10)

Suggestion: This is one to watch, it could be the best crime thriller of the modern era. It has everything for all fans so sit and enjoy. (Watch)

Action Scene Of The Film: The second heist car chase.

Kill Of The Film: James

Believability: The heists have a good believable feel about them, but the overall story is harder to believe. (3/10)

Oscar Chances: Nominated for One Oscar

Tagline: Welcome to the bank robbery capital of America.