Plot: Machete (Trejo) gets a chance to make up for a bust that goes wrong. The President (Estevez) offers him a chance to go back to Mexico to stop a revolutionary Mendez (Bichir). When the plan goes wrong Machete must bring Mendez to Voz (Gibson) the mastermind behind everything to disarm the bomb while ever hit man in Mexico and America are hunting him down.

Verdict: A fun over the top action film

Story: What plays out as an over the top Bond film the term original story doesn’t come close to this. We have seen all of this before but maybe not to the extremes of this. We have an unlikely hero who lets actions speak louder than words and plenty of twists and turns. Cameos a plenty too, you will see a familiar leading performer in nearly every scene. In the end the story is easy to follow and just fun don’t expect anything serious or you will hate this. (8/10)

Actor Review: Danny Trejo – Machete the lone hit man who doesn’t’ seem to be able to die and will kill anyone who gets in his way with anything he can get his hands on. Trejo is a great fit for this role and continues what he started with the first Machete film. Action Star Award, Kick Ass Award (8/10)

Actor Review: Mel Gibson – Voz a criminal mastermind who claims he can see into the future and has planned to save the people who believe him but destroy the world. Gibson does great in this cold calculated criminal. (8/10)

Actor Review: Demian Bichir – Mendez a man with a split personality where one is a revolutionary while the other is a Cartel kingpin. Demian is brilliant in this role and clearly steals the show. Scene Stealer Award, Favourite Character Award (9/10) 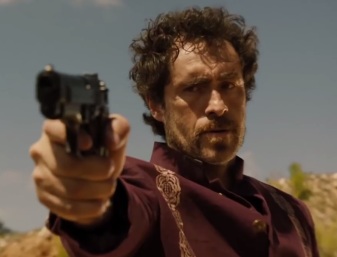 Actor Review: Carlos Estevez – The president but the normal Charlie we are used to seeing. Using his real name adds to the comical idea of Charlie Sheen being the President. (8/10)

Director Review: Robert Rodriguez – We know Robert can give us action that is way over the top that you just have to sit and enjoy and this keeps up the trend. (9/10)

Action: Nearly every scene is action based, involving shoot out or fights. (9/10)

Special Effects: Great special effects for most of the death scenes. (10/10)

Believability: Way to over the top to be believable. (0/10)

Settings: Many different settings between Mexico and America all work well for the story one of the highlight locations is Mendez hideout being an ancient pyramid.  (9/10)

Suggestion: I think this film really will only be for the people who are fans of the genre and anyone who goes to watch this with a serious hat on will be very disappointed. Just go and watch, enjoy and switch your brain off. (Action Fans Watch)

Action Scene Of The Film: Machete versus the henchmen clones.

Kill Of The Film: A henchman and helicopter.

Trivia: The first film Charlie Sheen as used his real name and the first film Mel Gibson has played a villain.

Chances of Sequel: It is open for a sequel.