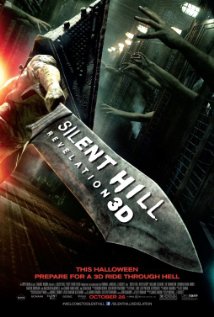 Horror: Filled with monsters, nightmare sequences and plenty of darkness filling a lot of the horror creation needed. Unfortunately the atmosphere created doesn’t reach the same level as the first film. This still comes off as a good horror level but not to the level it could have been  (8/10)

Special Effects: Some good monster creations, most notable the spider in the wax factor. (9/10)

Suggestion: A horror film well worth a watch (9/10)

Best Part: The creepy spider in the wax factor

Worst Part: Malcolm McDowell, Radha Mitchell and Deborah Kara Unger are all pretty much just cameo bit disappoint especially how important the characters of the ladies are in the first film,

Overall: A steady follow up to what was most likely the best video game adaptation that doesn’t reach the same level but still offers a lot more than any over video game film. Unlike the Resident Evil’s this one still uses atmosphere rather than action to create the on going story. Still one of the better horror films of the year but doesn’t offer anything truly original to the genre.